No sneak attack: Bearcats a challenge to Razorbacks for starters 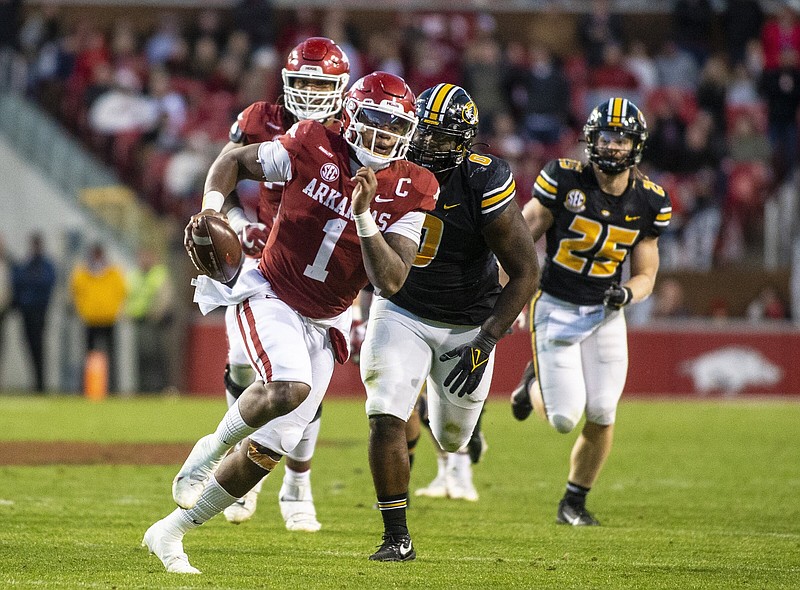 Arkansas Quarterback KJ Jefferson (1) runs the ball on Friday, Nov. 26 2021, during the second half of play at Reynolds Razorback Stadium, Fayetteville. Visit nwaonline.com/211027Daily/ for today's photo gallery..(Special to the NWA Democrat-Gazette/David Beach)

FAYETTEVILLE -- No way the Cincinnati Bearcats can slip up on the University of Arkansas in Saturday's season-opener at Reynolds Razorback Stadium.

Not with last year's College Football Playoff appearance on their resume.

Not with a number -- 23 in the Associated Press top 25, and 22 in the USA Today coaches poll -- listed in front of their name on the matchup, despite big personnel losses on defense and the skill positions.

The Bearcats trail the Razorbacks by four spots in the preseason AP poll and lead the Hogs by one in the coaches poll. Arkansas is roughly a touchdown favorite, with the spread being at six points Monday, for the first meeting between the teams.

Opening against a team that went 13-1 last season and broke a glass ceiling as the first Group of 5 team to reach the CFP made it easier to keep the team's attention during the offseason.

There's a tinge of mystery to how the Bearcats will operate offensively, as Coach Luke Fickell has not announced a starting quarterback in the competition between redshirt senior Ben Bryant and redshirt sophomore Evan Prater, the highest-rated recruit in Bearcats history who was Ohio's Mr. Football in 2019.

Bryant, who played in 16 games for the Bearcats between 2018-20, came back after losing the starting job to Desmond Ridder and transferring to Eastern Michigan last year. Bryant completed 279 of 408 passes (63.4%) for 3,121 yards with 14 touchdowns and 7 interceptions with a 140.53 efficiency rating.

Prater served as the backup last season to Ridder, a third-round NFL Draft pick by the Atlanta Falcons. Prater appeared in 7 games and completed 5 of 11 passes for 38 yards, with 2 touchdowns and 1 interception, and rushed for 105 yards and 2 touchdowns.

Pittman said last week he wouldn't be surprised if both quarterbacks got work against the Razorbacks.

Arkansas has no such quarterback uncertainty.

Redshirt junior KJ Jefferson is back after starting all 13 games last season while leading the Razorbacks to a 9-4 record.

Jefferson's play in last season's season-opener was shaky for the entire first half and parts of the third quarter, and that was reflective in the team's performance against Rice. For that reason, the Arkansas coaching staff has put a big emphasis on starting with a spark Saturday.

The Razorbacks cannot afford the same sloppy opening and mistakes they committed in last year's season-opener, when they overcame a 17-7 deficit to down Rice 38-17.

In that game, Arkansas drew 13 penalties for 117 yards and had nearly eight minutes fewer possession time than the Owls at 33:54 to 26:06.

Arkansas punted five times and Jefferson threw an interception among the Hogs' first seven possessions -- with one touchdown drive thrown in -- during the first half.

Pittman contrasted the feeling for preparing for the Cincinnati game to facing unheralded Rice.

"You know we were coming off a 3-7 season and we were just trying to get any win we could get," Pittman said. "Actually you know, we had to stop Rice on a fourth down or we were in major trouble in the third quarter last year against them. So it wasn't exactly like we really were hitting on all cylinders in that game."

Pittman was referencing a fourth-and-1 play at the Arkansas 18 with Rice ahead 17-10 after driving 57 yards late in the third quarter. Linebacker Bumper Pool and nickel back Greg Brooks Jr. beat tailback Jordan Myers to the edge and forced him out of bounds for a 1-yard loss on the fourth-down snap.

Arkansas tied the game on Cam Little's 34-yard field goal a few minutes later. The Hogs took the lead for good on Trelon Smith's 2-yard touchdown run a few snaps after safety Jalen Catalon's 39-yard interception return to the Rice 4 on the final play of the third quarter.

So the Razorbacks were in a big battle in last year's opener prior to hosting No. 15 Texas in Week 2. This time around, the ranked opponent comes out of the chute with the conference opener against South Carolina looming in Week 2.

"We tried to downplay the noise of Texas as much as we could last year," Pittman said. "We knew that we had to beat Rice and obviously didn't do a very good job of that, the first half especially.

"This year we know nobody's said a word about South Carolina."