They were filming comedy series — then war broke out 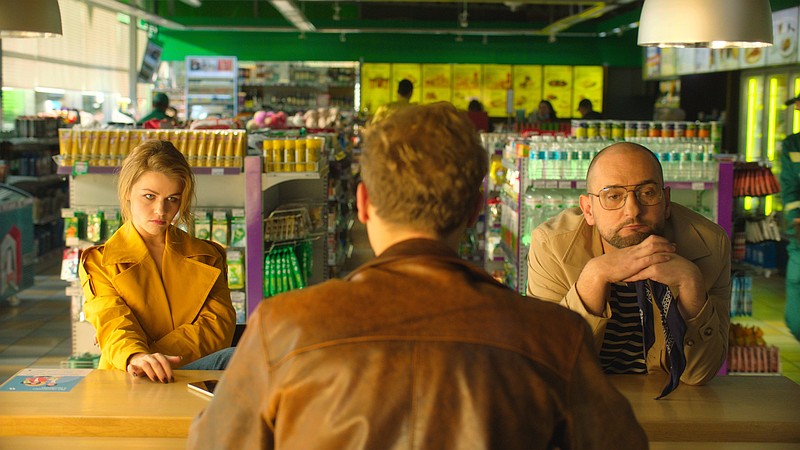 The main characters of the Ukrainian TV series are shown in a gas station in the eight-part comedy series. (Courtesy of Den Tolmor)

Deep below ground in the bomb shelter, they could hear the Russian shells pounding the edges of Kyiv, the Ukrainian capital. Victor Greenchuk, wearing camouflage pants and squatting on a pile of old tires, peered through the ill-lit gloom at two laptops perched precariously on a scuffed computer tower. By his side Igor Volkov slumped forward, fingers tapping a keyboard, trying to balance his lanky frame on two upturned cinder blocks.

The furtive ministrations of Greenchuk, a film editor, and Volkov, a producer, on those perilous days this spring have stretched into the summer. They've sprawled into an international saga of persistence and audacity spanning half-a-dozen countries and two continents in the shadow of war. Even now, after months of stops and starts, they and other members of a 20-person crew pore over about 3 trillion bytes of digital data, a quantity too vast to efficiently transfer out of the country via the internet to the show's executive producer, who lives in Miami.

"It's a mess," Den Tolmor, the Oscar-nominated filmmaker who is producing the comedy series, told me as we gazed out at the ocean from the balcony of his luxury apartment in Miami's chic Brickell neighborhood. "But we're going to get it done." 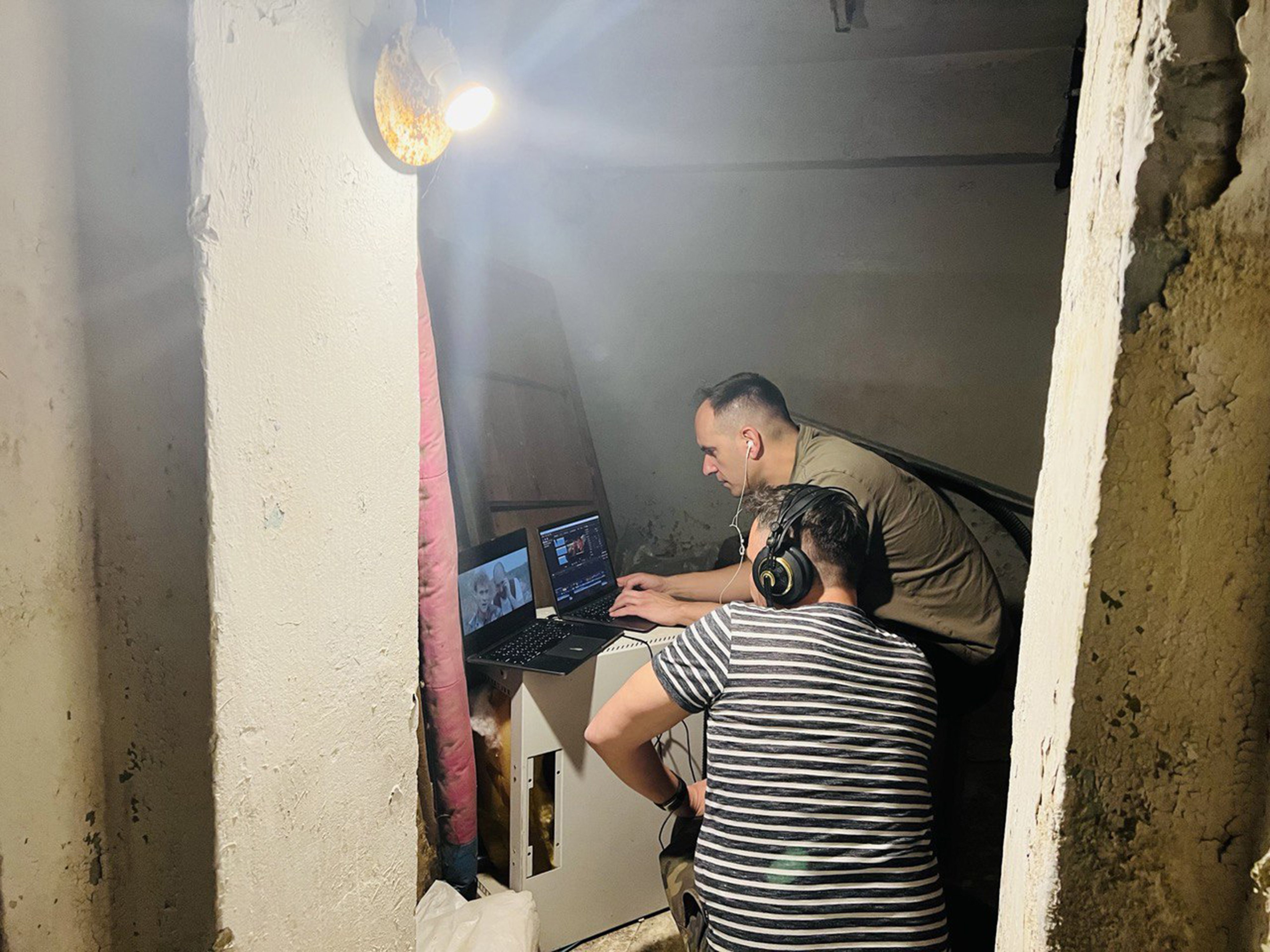 In a bomb shelter in Kyiv, Victor Geenchuk, foreground, and Igor Volkov watch footage of a comedy series they are wrapping in Ukraine. (Courtesy of Den Tolmor)
IN HUMAN DARKNESS

Tolmor, a rakishly handsome 51-year-old with thick silver hair, needs this project for reasons that go beyond the desire for a hit production. Born in Moldova, he fled armed conflict in his native land as a 20-something in the 1990s and entered the United States as a refugee. In the decades since, he has been immersed in human darkness, garnering an Oscar nomination in 2016 for producing "Winter on Fire: Ukraine's Fight for Freedom," a Netflix documentary now free on YouTube about the violent 2014 uprising to oust that country's corrupt president, Viktor Yanukovych. From there, Tolmor moved on to producing a documentary about human rights abuses, "Cries From Syria."

"My mind asked me to switch to something else," Tolmor says, "to put some fun in the world." He started reading through pitches for comedy programs, ultimately settling on a wild story by Ukrainian writer-director Anton Skrypets about a philandering mayor whose wife gets revenge by becoming an adult-film actress. Political intrigue, spin-doctoring and gunplay ensue. Think "House of Cards" meets "Boogie Nights" — with subtitles.

Tolmor, who has bounced between the United States and Eastern Europe, and worked in the television industries in Russia and Ukraine, settled on Kyiv as the filming location because he knew he could get high-quality talent there for a fraction of what it would cost in the West.

In early February, after taking a breather at home in Miami from months of filming, he flew back to Kyiv to launch postproduction. Even though Russian troops were massing at the border, Tolmor, his crew and his contacts at high levels of the Ukrainian government thought there was no chance Kyiv was in danger if there was an invasion.

He felt optimistic as he returned to Miami, where he has lived for five years, its pleasure-centric vibe an escape from the war zones where he's made his name in the film business. In tightfitting linen shirts and accompanied by his wife, Lara, an entrepreneur and philanthropist, they look at home among the so-called Brazillionaires, well-heeled Russian expats and Cuban American elite in that most international of American cities.

A few days after he landed in Miami in February, Russia invaded Ukraine. Russian troops eventually pushed toward Kyiv. Operating from his home office, Tolmor spent days trying to no avail to reach Serhii Baranov, one of his lead producers in Kyiv. When Tolmor finally got through to him, the depth of the nation's — and his production's — crisis became even clearer. All was chaos. Countless Ukrainians were fleeing cities they feared would be leveled by Russian missiles. Baranov had escaped to an outlying town and sent his family to a different city to look in on his parents. One of his producers joined Baranov's family.

Their director, Skrypets, could not be found, Baranov told me in a WhatsApp call from Kyiv. Same for their lead actress, Liliya Tsvelikova. They'd heard their lead actor, Artur Ignatenko, was somewhere in Europe. France, they thought. Or maybe it was Poland? Their music composer was in Budapest.

"Everybody went where they could," Baranov says. "Everybody was scared." In addition to those who fled the city, there were also two crew members who had gone off to fight, he told me. No one knew if they were alive or dead. 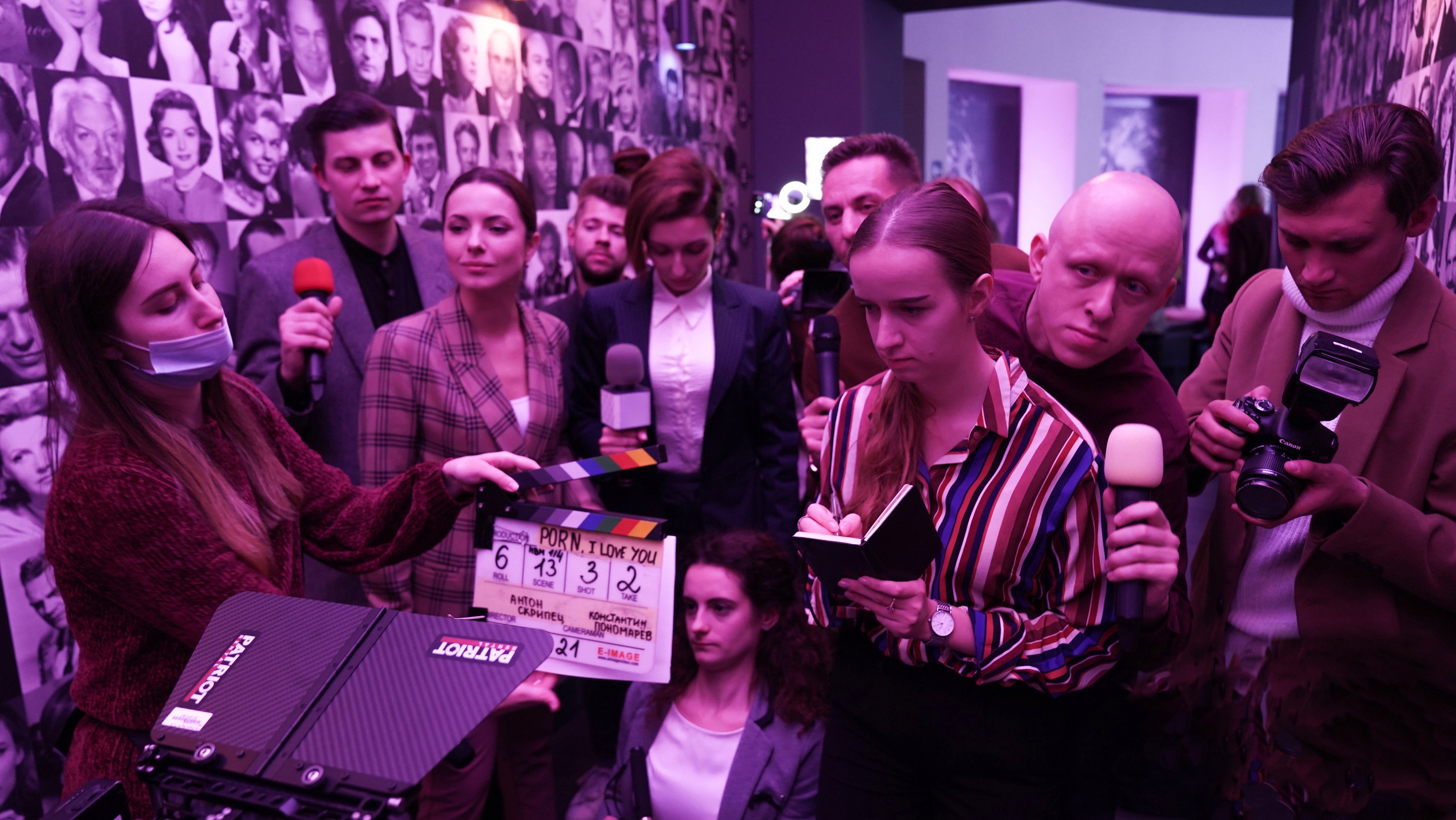 "Forgive me," Tolmor said to Baranov after inquiring about his cast and crew. "What about the materials?" There was a sense of urgency to find the reams of footage they'd amassed because Tolmor and a partner had already invested more than $1 million in the project and it was many months behind. They hadn't even been able to put together a standard preview reel to use in pitching the show.

Baranov assured Tolmor the hours and hours of digitized scenes were safe. He'd made a copy and was shuttling it and the original around Kyiv and the city's outskirts, hoping to guess correctly which areas were less vulnerable to possible missile attacks while hiding the backup copy in separate locations in case the original was destroyed.

While trying to salvage his comedy series, Tolmor also rounded up buses and drivers to ferry supplies into Ukraine from Poland, and then take back hundreds of refugees. He called it the "Kyiv Convoy." The informal effort has morphed into a nonprofit, KindDeeds, dedicated to humanitarian aid and legal assistance to Ukrainian refugees.

Slowly the production crew began reconstituting their team. But just when they would find someone, they'd often lose track of that person again. Cellphone systems crashed. Some of the crew were seeking refugee status. Others were pinballing between hideouts in the countryside and around Kyiv.