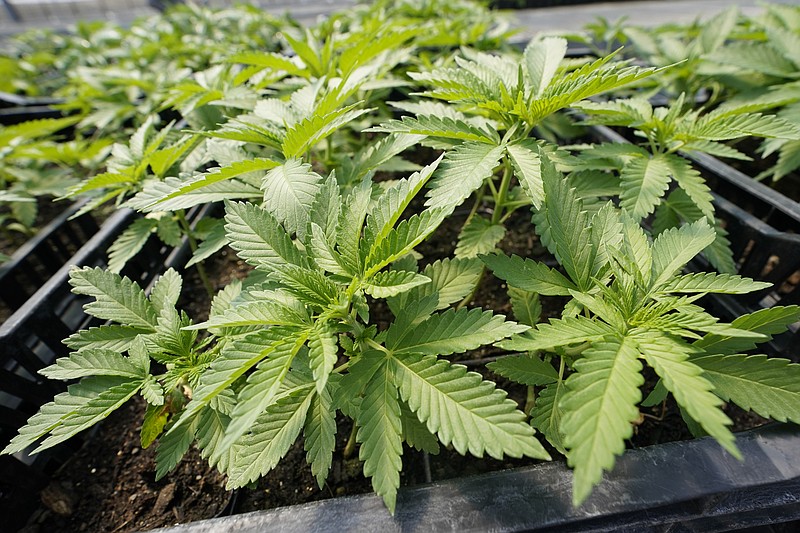 FILE - Marijuana plants for the adult recreational market are are seen in a greenhouse at Hepworth Farms in Milton, N.Y., Friday, July 15, 2022. Missouri voters are set to be the first in the nation to sign off on automatically forgiving past marijuana crimes if they approve a constitutional amendment to legalize recreational pot in November 2022. (AP Photo/Mary Altaffer, File)

The Arkansas attorney general's office argued in a brief it filed Tuesday that the State Board of Election Commissioners made the right call in kicking a proposed referendum to legalize recreational marijuana off the November ballot.

Earlier this month, Responsible Growth Arkansas, a group in favor of legal recreational marijuana, filed suit after the election board rejected the cannabis referendum's popular name and ballot title over concerns that it does not limit the level of THC, the psychoactive chemical in marijuana.

Responsible Growth Arkansas has asked the Arkansas Supreme Court to step in and order the proposed constitutional amendment back on the November ballot.

To get the recreational marijuana referendum on the ballot, activists said they collected more than 192,000 signatures from registered voters, exceeding the roughly 90,000 they needed to get a proposed amendment to the state's constitution on the ballot.

If passed, the amendment would legalize recreational cannabis for adults and allow the state to issue dispensary and cultivation licenses. In 2016, Arkansas voters approved a referendum legalizing medical marijuana in the state.

While the election board rejected the referendum, the Arkansas Supreme Court issued a preliminary injunction to keep the question on the ballot until it issues a final ruling.

In its brief filed Tuesday, the attorney general's office, which is representing the state in the lawsuit, said the recreational marijuana question's ballot title was "misleading" as it would alter the state's limit on THC, or tetrahydrocannabinol.

"As determined by the Board, the Ballot Title here is misleading because it fails to inform voters that it will repeal the 10 milligram limit of THC per portion for edibles," the attorney general's office said in its brief.

The attorney general's office also argued the referendum would repeal the state's regulations on child-proof packaging and restrictions on advertising toward children that currently apply to medical cannabis. Arkansas Alcohol Beverage Control has the power to regulate medical marijuana under the conditional amendment passed in 2016, something that would be undermined, the attorney general's office said.

"The omission is particularly glaring when one also considers how deeply the Amendment cuts into ABC's current authority 21 to issue rules that regulate the advertising, marketing, packaging, and promotion of dispensaries and cultivation facilities," the attorney general's office said in its brief.

The anti-marijuana groups -- Save Arkansas from Epidemic and Safe and Secure Communities -- also filed briefs Tuesday against the proposed constitutional amendment. The groups joined the lawsuit as intervenors, or third parties, last week.

"Because the proposal's real definition of cannabis is not limited to what most Arkansas voters think of as marijuana but also covers industrial hemp, equating cannabis (as defined in the amendment) with marijuana is misleading," said Brett D. Watson, an attorney representing Safe and Secure Communities said.