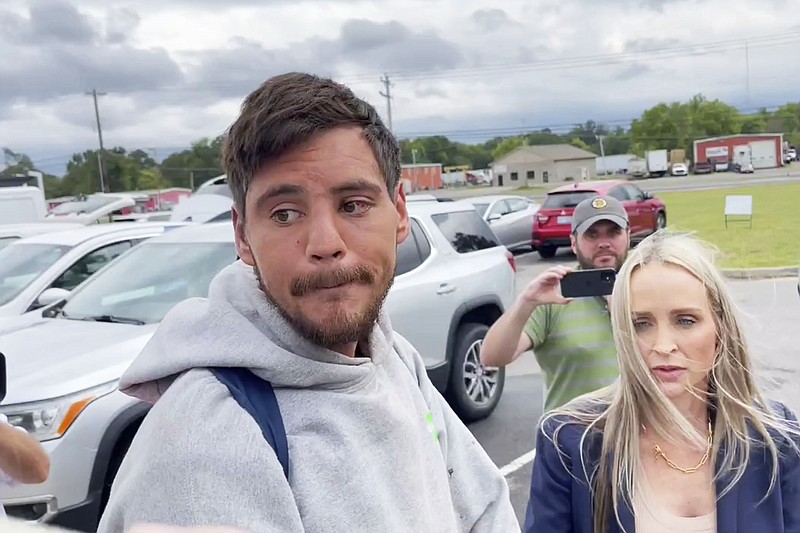 Randal Worcester leaves the Crawford County Justice Center in Van Buren on Monday. Three Arkansas law enforcement officers were suspended after a video of Worcester’s arrest showed two of them beating the suspect while a third officer held him on the ground outside a convenience store. (AP/Andrew DeMillo)

FORT SMITH -- The legal team for a man who was shown being held down and beaten by three law enforcement officers in a video widely seen online filed a federal civil-rights lawsuit against the officers involved.

Deputies Zack King and Levi White of the Crawford County sheriff's office and officer Thell Riddle of the Mulberry Police Department were recorded on video using force while arresting Worcester about 10:40 a.m. Aug. 21 outside the Kountry Xpress convenience store off Interstate 40 in Mulberry. The video depicted the officers repeatedly punching and kneeing Worcester and slamming his head to the pavement, as well as telling a bystander to get away from the scene.

The lawsuit accuses them of violating Worcester's rights under the Fourth and Fourteenth amendments of U.S. Constitution, and, by extension, federal law, through the Aug. 21 incident. It also accuses them of committing negligence, battery and assault against Worcester.

The lawsuit states that Worcester was traveling home to South Carolina by bicycle Aug. 21. Riddle was dispatched to Kountry Xpress in response to a call reporting Worcester had threatened a gas station attendant, and stopped Worcester on his bike with King and White.

Worcester told the officers he asked an attendant at Kountry Xpress for water, according to the lawsuit. The attendant reportedly got angry with Worcester and asked him to leave the store. Worcester also said he had a small pocket knife, but gave it to the officers, leaving him unarmed.

White then "aggressively attempted" to put Worcester's arms behind his back to handcuff him without either giving a reason for doing so or reading Worcester his Miranda rights. This led to a physical altercation in which the three officers reportedly tackled Worcester and restrained him by pinning his hands and arms behind his back.

The lawsuit states that despite this, the officers continued punching, kicking and kneeing Worcester in the face, head, back, stomach and legs repeatedly. White at one point picked Worcester up by the head and slammed his face and head into the pavement, with Worcester being unable to protect himself. None of the officers tried to use other tactics to de-escalate the situation or subdue Worcester, such as a stun gun or pepper spray.

"Such force used by the defendant officers, individually and in their official capacity, was in excess of any force required to take Mr. Worcester in custody and maintain him in custody, was grossly out of proportion to any need for the use of force by defendant officers, was not employed in good faith and caused severe injuries to Mr. Worcester," the lawsuit states.

Although Worcester was afterward treated at a hospital Aug. 21, he refused any attention because of "his terror of the officers," the lawsuit states. The officers reportedly caused Worcester "serious bodily harm" through their arrest, including permanent injuries and an injury to his face, body and head that will require continual medical treatment. Worcester also sustained medical expenses.

The lawsuit asserts Gregory, the city of Mulberry and its Police Department failed to respond to previous complaints of similar behavior concerning Riddle, as well as inadequately trained and supervised him while being "deliberately indifferent" to this. It accuses Damante, Crawford County and the Sheriff's Office of the same things concerning King and White.

The Sheriff's and Deputies' Accounts

Damante said Thursday that Worcester was reported to have threatened a female employee at Sargent's gas station off Interstate 40 in Alma with a knife earlier in the day. He then spit on the woman and left by bicycle.

King, White and Riddle encountered Worcester shortly afterward in Mulberry, according to Damante. Worcester, who still had a knife, reportedly gave the officers a false name. Worcester then "aggressively tackled" one of the officers trying to arrest him, slamming the officer's head into the concrete and causing a concussion, in addition to punching him on the head.

The video of the incident that went viral through social media didn't include any of this, Damante said. However, some of it was recorded via a vehicle camera.

"The citizen video is troubling to watch, as is often the case when officers are trying to arrest a violent criminal with a history of assaulting police," Damante said.

Damante said Worcester is a convicted felon who's been charged with, or convicted of, multiple incidents in the last 10 years, including an assault on a police officer.

Worcester pleaded guilty in Cleveland County, Okla., to felony assault and battery on a police officer and misdemeanor obstructing an officer in August 2021, according to records provided by the county's District Court Clerk's Office. He received a three-year suspended prison sentence for the first charge and a 60-day sentence for the second charge, including time served, court records state.

Russell Wood, an attorney with the Wood Law Firm in Russellville representing White and King, identified White as the deputy Worcester reportedly attacked in a news release Aug. 22. He said White needed medical attention after the incident.

A Friday post on the Wood Law Firm Facebook page states that White and King didn't have stun guns Aug. 21.

The Future of the Case

Worcester is asking for compensatory and punitive damages, as well as other relief such as attorney's fees and costs, medical bills and lost wages, according to the lawsuit.

The other cases pertain to two clients Jernigan claimed in a TikTok video and news conference last week were "attacked" by deputies within about the past month. She identified White as being involved in both instances.

Rose said the decision to file the lawsuits will be based on how the sheriff's office responds to the Worcester lawsuit.

Arkansas State Police is doing an independent investigation into the use of force.

The U.S. Attorney's Office for the Western District of Arkansas, the Department of Justice and the FBI's field office in Little Rock also opened a civil rights investigation into the incident, according to authorities. King, White and Riddle are suspended with pay.

The Sheriff's Office and Mulberry Police Department were both sent Freedom of Information Act requests asking for any and all excessive force complaints filed against them during the past 12 months.

Gentry Wahlmeier, an attorney representing Crawford County, said Tuesday that there haven't been any written reports or formal complaints of excessive force for anyone in the sheriff's office made by the public in the last 12 months.

Sean Brister, an attorney representing Mulberry, likewise said Thursday that the Police Department doesn't have any responsive records concerning excessive use of force complaints during the same period of time.