Series of twisters rakes the South over two-day span by KIM CHANDLER and JEFF MARTIN The Associated Press | December 1, 2022 at 4:35 a.m. 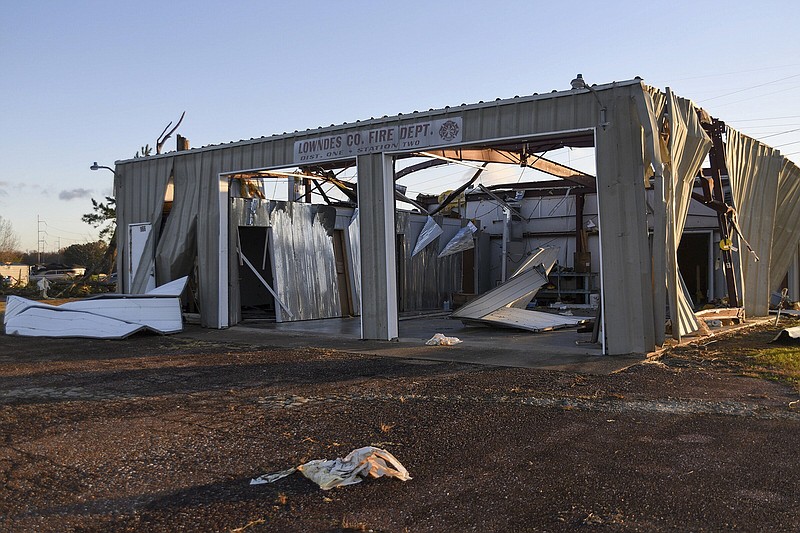 MONTGOMERY, Ala. -- A twister roaring out of the darkness smashed through a small Alabama community early Wednesday during an outbreak of tornadoes across the Deep South, killing a 39-year-old woman and her 8-year-old son on a street where generations of one family lived.

One of dozens of tornadoes kicked up by a severe weather front that spent two days rolling from east Texas across several Southern states, the storm shocked people from their sleep in Flatwood, a sparsely populated community not far from the Alabama state capital of Montgomery.

In the early morning darkness, family members emerged from splintered homes to the sounds of screaming. Several homes in their community had been hit by falling trees, and a large pine tree crushed the bedroom of the mobile home where a father, mother and son were believed to be sleeping.

"The tree fell right slap in the middle of the bed while they were asleep. It fell on the wife and the kid," family member Norman Bennett said of the victims.

The Montgomery County sheriff's office said the victims were a 39-year-old-woman and her 8-year-old son, but did not release their names. A man, who is the woman's husband and boy's father, was injured and taken to the hospital.

Bennett said the man was trapped under the tree and debris, and could not see what had happened to his wife and child. "He was hollering. 'Find my baby. Find my baby," Bennett said.

The storm system fueled by record high temperatures spawned dozens of tornadoes on Tuesday and early Wednesday as it moved from east Texas through Louisiana, Mississippi, Alabama and neighboring states. Tornadoes damaged homes, destroyed a fire station and ripped the roof off an apartment complex in Mississippi. In Alabama, the same storm system destroyed a community center and left a mess of toppled trees, downed power lines and debris.

A total of 73 tornado warnings and 120 severe thunderstorm warnings were issued from Tuesday afternoon to Wednesday morning, said Matthew Elliott, a meteorologist at the Storm Prediction Center in Norman, Okla.

Montgomery County Sheriff Derrick Cunningham said a community center in Flatwood, on the same road where the fatalities occurred, was destroyed, and that search and rescue teams were going door to door Wednesday to account for all residents.

The National Weather Service office in Birmingham classified the Flatwood storm as an EF-2 tornado, with winds estimated at 115 mph.

Elsewhere, in the west Alabama town of Eutaw, large sections of the roof were missing from an apartment complex, displacing 15 families in the middle of the night, and power lines and trees were "all over the road," Eutaw Police Chief Tommy Johnson told WBRC-TV.

A suspected tornado also damaged numerous homes during the night in Hale County, Alabama, where the emergency director said more than a third of the people live in highly vulnerable mobile homes.

"I have seen some really nice mobile homes tied down, but they just don't stand a chance against a tornado," Hale County Emergency Management Director Russell Weeden told WBRC.

The weather service confirmed that tornadoes also hit the ground in Mississippi. Images of the damage from Caledonia showed a grocery store damaged, a fire station shredded and a house toppled, but Lowndes County Emergency Management Agency Director Cindy Lawrence told WTVA-TV that everyone escaped injury.

Hail stones crashed against the windows of City Hall in the small town of Tchula, Miss., where sirens blared as the mayor and others took cover. "It was hitting against the window, and you could tell that it was nice-sized balls of it," Mayor Ann Polk said.

High winds downed power lines, and flooding was a hazard as more than 5 inches of rain fell within hours in some places. More than 50,000 customers in Mississippi and Alabama were without electricity at one point Wednesday, according to poweroutage.us, which tracks utility outages.

Information for this article was contributed by Jeff Martin, Michael Warren, Jill Bleed, Michael Goldberg and Sara Cline of The Associated Press. 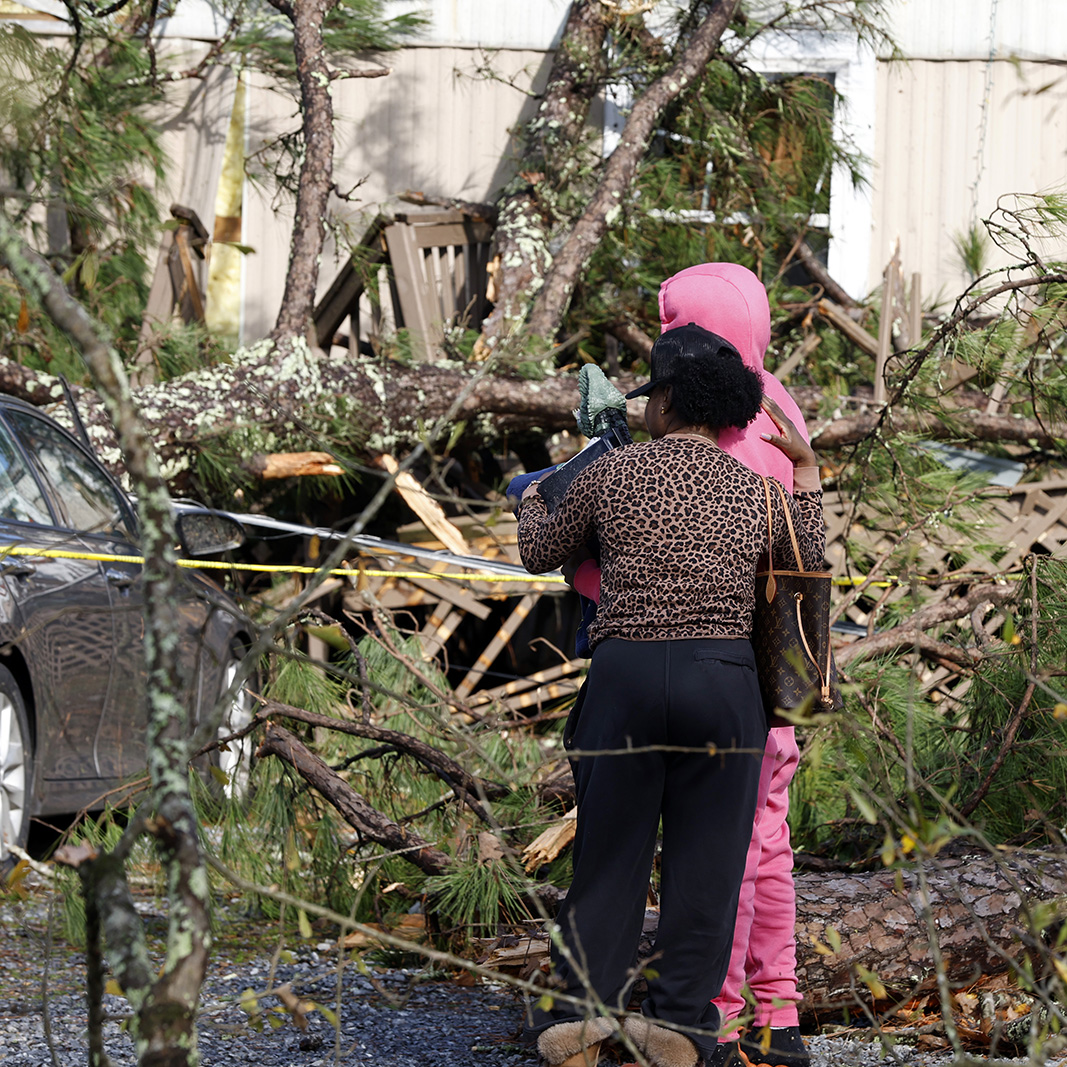 Family members console one another outside a damaged mobile home Wednesday in Flatwood, Ala., after a tornado tore through the area before dawn. Two people were killed in the community just north of Montgomery. The tornado was one of dozens spawned over two days from east Texas across several Southern states. (AP/Butch Dill)