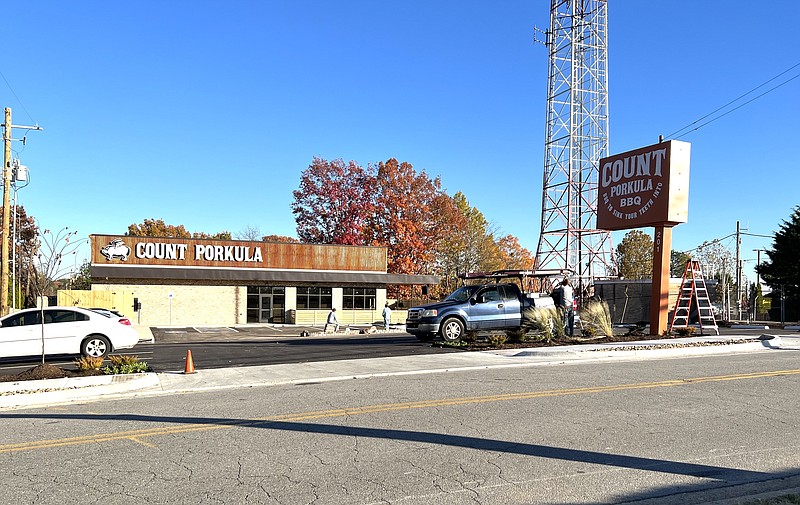 Workmen finish the landscaping and the parking lot at the Count Porkula at 201 Keightley Drive. The barbecue restaurant moved out of its space at the Rail Yard and into the new building this week; opening day is yet to be determined. (Arkansas Democrat-Gazette/Eric E. Harrison)

Count Porkula on Wednesday officially moved out of its home at The Rail Yard on East Sixth Street and into its new building at 201 Keightley Drive (just north of Cantrell Road), former home (before a devastating fire) of the Ozark Country Restaurant.

Sunday was the last day of business in the old location, into which the barbecue establishment, which had previously operated out of a food truck, moved in late 2018. (The food truck is also still operating.) Opening day in the new spot is awaiting some permit inspections, some of which are on hold. Landscaping on the parking lot was scheduled to finish up earlier this week.

The new establishment is officially to be named Count Porkula at the Crossroads, as the one that owners Kelly Lovell and Walt Todd opened, in partnership with the Keet Family's JTJ Restaurants, in June on Maumelle Boulevard in North Little Rock is officially Count Porkula on the Boulevard.

The new 2,900-square-foot space will have outdoor seating and a full bar; we're awaiting word on operating hours — it's 11 a.m.-8 p.m. daily on the Boulevard — and whether they'll keep their existing phone number, (501) 804-9561. We also don't know for sure just what might go into Count Porkula's former Rail Yard space, but the Facebook post optimistically refers to "a lot of exciting things coming soon." facebook.com/CountPorkulaBBQCrossroads.

And speaking of barbecue, we hear rumors and reports from time to time that Northwest Arkansas-based Wrights BBQ, with locations in Johnson, Bentonville and Rogers, has been planning to open a Little Rock outlet. Latest rumor/report is that it is going into the Riverdale Shopping Center, in the 2500 block of Cantrell Road, and that after a major makeover will include several restaurants. That rumor certainly comes as a surprise to Linda Hinton, director of property management for Cushman & Wakefield/Sage Partners, which is managing the property. Hinton, meanwhile, confirms a target of late January for the opening of an outlet of Benton-based Eat My Catfish in the center's east end-cap that used to house a Pizza Hut, and that discussions are underway with at least two other potential restaurant tenants — she won't discuss specifics before leases are signed, but neither of them, she says, is a Wrights BBQ. And since the center already houses a Whole Hog BBQ Cafe, having two barbecue restaurants there would be unusual to say the least.

And speaking of renovated shopping centers, Jack Sundell, co-owner with wife Corri Bristow-Sundell of The Root Cafe, 1500 Main St., Little Rock, says he's in the process of signing a lease on a second location, in the Breckenridge Village Shopping Center, North Rodney Parham Road and Interstate 430. It's going into the same building as the pending second Little Rock location of Deluca's Pizzeria. "We're very excited about it," Sundell says, explaining that the new restaurant will be "Root Cafe 'plus,'" with the same basic menu and amenities as the downtown location, but with a full bar "and more emphasis on dinner," based in part on its proximity to the Breckenridge Village 12 movie theater. Hours will probably be the same, 8 a.m.-8 p.m. Tuesday-Sunday, breakfast until 11 a.m., with Sunday brunch until 2 p.m., Sundell says. And it'll still be a farm-to-table operation with a concentration on locally sourced ingredients — "I wouldn't do it any other way," Sundell says proudly. It's still too early and there are too many indefinites to have a timeline to open, he explains.

Baja Grill owners Craig Roe and Heather Baber-Roe, who go by The Taco Society and who also operate Benton's Valhalla Kitchen + Bar in Benton and Baja Grill in Benton and Little Rock, opened RÕBER Cocktails + Culinary, 302 W. South St., Benton (next-door to the Benton Baja Grill and Valhalla, both in The Palace, a renovated movie theater). Tuesday's opening is "with our very new, very small, but very hardworking crew," according to the Facebook page (facebook.com/roberbenton), where you can also find the upscale American dinner menu — appetizers include a pimento cheese blend, Gorgonzola cream gnocchi, a Bacon Flight ("over a pound of pork belly," in five flavor combinations), seared sea scallops and whipped feta; entrees include a braised short rib, a gumbo, "wood.water.whiskey" ("salmon on a whiskey-soaked cedar plank [with a] sweet whiskey glaze"), shrimp and roasted scratch grits, slow-roasted pork tenderloin, Burger Thirty Nine and a vegan pasta. Oh, and an open-view charcuterie bar. The intimate dining room, toward the back of the establishment, seats 54, so dinner reservations are recommended — visit tinyurl.com/25fuwfxj. Hours are 5-10 p.m. Tuesday-Thursday, 5-11 p.m. Friday-Saturday.

Kendall Case and her family, who own Sauce(d) Bar & Oven and Zin Wine Bar on North Rodney Parham Road's Market Place Shopping Center, and also The Butcher Shop off Chenal Parkway, have acquired Red Moon Tavern, a west Little Rock pizzeria and bar, at 6015 Chenonceau Blvd., off Cantrell Road/Arkansas 10. We're told the staff, which Case praised to AY Magazine, will remain in place and that few changes are in the works --they include an update to the wine menu and a 4-6 p.m. daily happy hour. (501) 367-8188; redmoonlittlerock.com.

For the many folks who have been wondering just what's coming to the former IHOP at 11501 Maumelle Blvd., on the North Little Rock verge of Maumelle, we have at least a partial answer: Marty's Place Restaurant Bar and Grill. It's the fulfillment of what owner Marty Gunaca, CEO of Arkansas IHOP franchisee Golden Cakes Inc. — Derrik Gunaca, who filed in September for a restaurant mixed drink minimum permit with the Arkansas Alcoholic Beverage Control Division, is the company president — told us back in April 2021: He and some partners are working on what he calls a food and beverage concept "unique to the Maumelle-North Little Rock area" for that space. We reported at the time that it would focus on meals other than breakfast and that it would likely involve a bar. We don't yet have any additional details, including a timeline to open, but the establishment has posted chef, host, manager and server openings on ZipRecruiter, Glassdoor and Indeed.

The Library Kitchen + Lounge, 313 President Clinton Ave., in Little Rock's River Market district, has closed, according to a Monday post from owner Rob Byford on its Facebook page (facebook.com/thelibraryLR): "The time has come for The Library to permanently turn off the lights and exit the stage. I would like to thank all of the entertainers that have graced us with their talents over the last three years. Thank you to our staff, vendors, and resident musicians. I wish you all the best."

YGFBFKitchen Restaurant & Catering, 27 Rahling Circle, Little Rock, is now operating its own delivery service instead of relying on third parties. "We're excited to announce both pickup and delivery are now available for orders placed directly on our website," it says on their website — ygfbfkitchen.com — and "[j]ust select 'Delivery' at checkout to have your order delivered to your location. Ordering directly through us, instead of third-party apps or marketplaces, helps support our business so we can keep serving you!" Order via ygfbfkitchen.square.site; (501) 448-2220.

And dine-in customers at the Taziki's Mediterranean Cafe at 724 Oak St., Conway, can, through Dec. 7, bring a boxed-food donation to support the Community Action Program for Central Arkansas; in return they'll receive a voucher for a free individual hummus or chicken gyro on a future visit. (CAPCA is specifically asking for donations of boxes of stuffing and macaroni and cheese.) Taziki's is also raffling off 10 $100 Taziki's gift cards — one for each year the restaurant has served the Conway community; dine-in customers who bring in a food-box donation can fill out an entry ticket to drop in the raffle box. (501) 327-1829; tazikis.com; facebook.com/Tazikisconway.