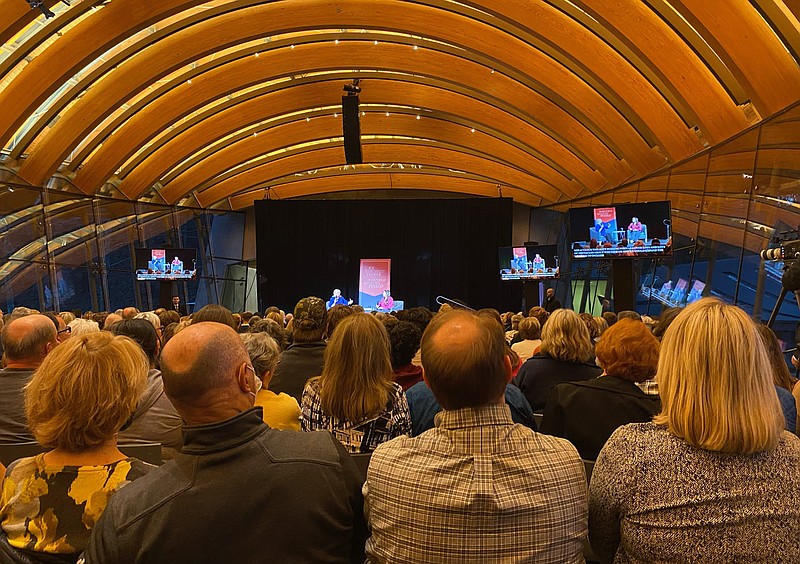 BENTONVILLE -- Former U.S. Sen. and Secretary of State Hillary Rodham Clinton said democracy will survive, though she has much concern about the impact disinformation is having on the country.

Clinton, former first lady of the country and Arkansas, was the speaker Wednesday at a program at Crystal Bridges Museum of American Art.

Her presentation was part of the museum's "We the People: The Radical Notion of Democracy" exhibition, which combines historic documents and original art to provide diverse perspectives on the nation's founding principles.

More than 600 people attended the event and interrupted Clinton on a few occasions with standing ovations.

Angie Maxwell, director of the Diane D. Blair Center of Southern Politics and Society at the University of Arkansas, served as the moderator and asked the questions of Clinton.

Clinton discussed the political state of the country, the U.S. Supreme Court's decision on abortion and disinformation.

Clinton said there's a deep fear of expanding "We the People" to include all of us, adding it is an inherent central struggle in the American journey where progress is made and then the country goes backwards.

"We have to regroup and continue pushing forward again," she said.

The struggle continues, with some trying to prevent certain groups of people from voting and to limit the definition of "We the People," she said.

Clinton said it's troubling to see elections, which have been viewed as the centerpiece of democracy, being targeted. As secretary of state, she traveled to other countries stressing the importance of free and fair elections, she said.

Clinton was critical of the Supreme Court's decision, announced in June, that overturned Roe v. Wade. She described the opinion as badly reasoned and said it obliterated the right to privacy.

"The right of privacy is not mentioned in the Constitution, but neither is AR-15," she said.

The U.S. House and Senate have voted to federally protect same-sex and interracial marriages; however, some states may not be required to recognize those marriages or permit gay marriage, she said.

An amended version of the Respect for Marriage Act, which would codify the Supreme Court's 2015 decision legalizing same-sex marriage, cleared the Senate on Tuesday. It will go back to the House for approval before President Joe Biden can sign it into law.

Clinton encouraged people to stay focused on the issue.

She said one of the biggest issues the country is facing as a democracy is where people get accurate information. There are no easy answers, and she learned a lot from her 2016 run for president, she said.

She referred to the case involving a North Carolina man arrested in 2016 after he fired an AR-15 inside a pizza restaurant in Washington, D.C., while he was "investigating" a false conspiracy theory the pizzeria was harboring a child sex-trafficking ring connected to Democrats such as Clinton. Edgar Maddison Welch was sentenced in 2017 to four years in prison after pleading guilty to federal charges of assault with a dangerous weapon and transporting a firearm over state lines.

He did it because of what he read online, she said.

"We know the big lie works if you repeat it enough," Clinton said. "Social media is the big lie on steroids if you are selling a big lie."

People have to do more to fight back, she said.

Maxwell's last question to Clinton was: will democracy survive?

"Absolutely, yes," Clinton responded, adding she saw examples in the mid-term elections in lots of places.

Clinton said it didn't happen by accident and people were willing to run and speak out and even people running in Republican districts were willing to say the election was not stolen and Biden is the president.

"We saw some beginnings of people standing up and speaking out," Clinton said. "We saw that little glimmer of fact-based reality coming into focus."

Clinton said it was her first time visiting Crystal Bridges.

"It's great to be here in Bentonville and Crystal Bridges, one of the most amazing places in the world," she said.

Michael Brooke and his wife, Kate, attended the program. Brooke said he wanted to attend the event because it's a novelty seeing someone who was once in the White House. He said his wife wanted to come and he stood in line for tickets.

Kate Brooke said she's a big fan of Clinton's and wanted to see her. She said Clinton comes across as natural and added she likes Clinton's connection to Arkansas.