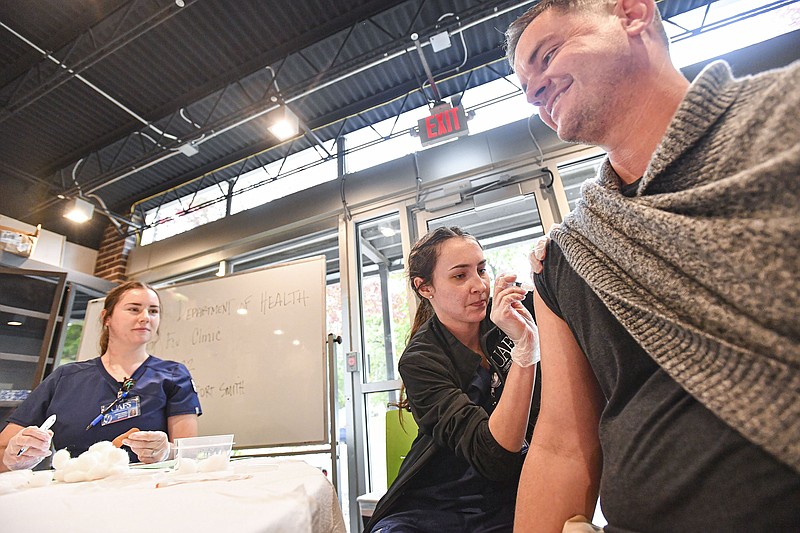 The number of influenza-related deaths in Arkansas this flu season has already reached last season's total.

The week that ended Saturday saw the largest increase in the number of deaths so far this flu season, from 19 to 30, more than double the highest increases reported in previous weeks, according to the state Department of Health's latest flu report.

About 26 flu-related deaths in the state were reported in November, including one pediatric death, according to the department. Thirty deaths were reported during the entire 2021-2022 season.

Flu season in the United States typically covers the fall and winter, with cases usually peaking between December and February and potentially lingering until May, according to the federal Centers for Disease Control and Prevention.

Thus far, the total of reported cases since Oct. 2 in Arkansas is over 11,900, the department reported. That number grew 2,400 last week and 2,500 the previous week -- the largest reported increases of the flu season so far. About 14,800 cases were reported last flu season.

Positive flu tests are reported by health care providers to the state Health Department's online database, but that number reflects only a portion of the state's total flu cases, according to the department.

Nursing home outbreaks rose from four to eight and eight to 13 during the two weeks covering Nov. 12-26.

Local hospitals have observed an ongoing spread of the flu and other respiratory illnesses in Northwest Arkansas.

"As a result of the increase of all three viruses, we have seen an increase in patient volumes across the Mercy Northwest Arkansas community," she said. "As always, we recommend getting a covid-19 vaccination, or a booster if you have already been vaccinated, as well as a flu shot to guard against covid and/or flu."

For the week ending Nov. 26, the Rogers hospital saw over 400 positive flu tests -- 378 of influenza A and 35 of influenza B. Some positive tests showed H1N1, a subtype of influenza A, according to Bhakta.

A rise in RSV cases over the last two months has seemed to slow down recently, according to Bhakta. Mercy saw just 20 RSV cases during the week, she said.

Covid-19 cases at Mercy have been rising steadily; last week's total was 80 cases, compared with about 25 cases the week ending Oct. 22, she said.

"While much of the illness we're seeing is manageable at home under the guidance of a pediatrician, there are a handful of severe cases in which children are requiring oxygen and hospital stays -- even among children who were previously healthy," he said.

This year's flu vaccine is a good match with the strain circulating in Arkansas and will help protect children and adults from serious illness, according to Barr.

"With just a handful of weeks left before school is out and families gather for the holidays, now is the right time to get a flu vaccine," he said.

Washington Regional Medical Center is also seeing an increase in positive flu tests and flu-related hospital admissions, according to representative Brooke Morgan. The medical center is also encouraging residents to get the flu vaccine, Morgan said.

About 8% of emergency room visits and outpatient visits last week were for reasons related to flu-like illness, compared to less than 3% at the same time last year, the state department reported.

School absenteeism rates among public schools were not reported last week because of Thanksgiving.

Nationally, 2,900 deaths, 53,000 hospitalizations and 6.2 million illnesses from influenza have been reported this season, according to the CDC.

Some health officials and providers have expected a more severe season than in previous years.

The 2021-2022 flu season was mild compared with flu seasons before the pandemic, according to the CDC. In the United States, the flu was associated with an estimated 5,000 deaths, 100,000 hospitalizations and 9 million illnesses last flu season.

The South and the West Coast have seen the highest levels of recent flu activity, according to the CDC's weekly influenza map.