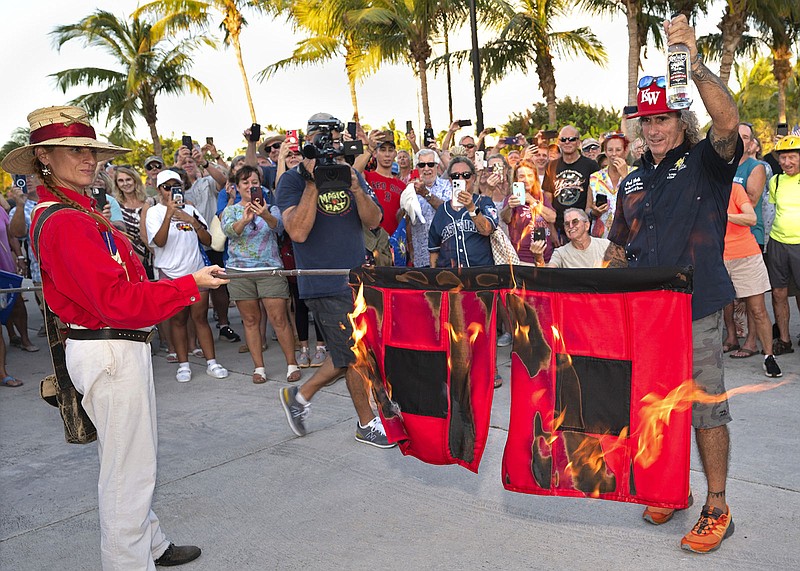 MIAMI -- An Atlantic hurricane season that had 14 named storms officially ended on Wednesday, leaving residents in the Florida Keys to celebrate even as others around Florida and Puerto Rico continue to grapple with the damage caused by Hurricanes Ian, Nicole and Fiona.

The 2022 season had an unusually calm first half but made upwith three destructive hurricanes in the second half, ending with an average number of named storms. The season runs from June 1 until Nov. 30.

This season was notable for a record-tying inactive August. This year was the first time since 1941 that the Atlantic Ocean has gone from July 3 to the end of August with no named storm, Colorado State University hurricane researcher Phil Klotzbach said. Since 1950, only 1997 and 1961 had no named storms in August.

Several hundred Florida Keys residents gathered Wednesday to mark the season's close by burning hurricane warning flags. The event featured a blast blown on a conch shell, a symbol of the Keys, and speakers recalled those affected by the 2022 hurricanes and expressed gratitude that the Keys were spared major impacts. Members of Key West's ceremonial Conch Republic administration then doused the hurricane flags with rum and set them ablaze. The event was staged beside the U.S. Coast Guard Cutter Ingham, a maritime museum docked at Key West's Truman Waterfront.

In late September, Hurricane Ian made landfall as a Category 4 storm in southwest Florida before leaving nearly 150 deaths and a swath of destruction as it moved northeast across the state. After making its way back to the Atlantic, the storm headed north and struck South Carolina as a Category 1 storm. With 150 mph maximum sustained winds, Hurricane Ian tied for the fifth-strongest hurricane ever to make landfall in the U.S., officials said.

Hurricane Nicole's eye hit central Florida's Treasure Coast area as a Category 1 storm in early November, but the greatest damage seemed to occur more than 100 miles to the north around Daytona Beach, where beach erosion started by Hurricane Ian worsened and led to homes collapsing into the ocean.

Hurricane Fiona was the season's first major hurricane, eventually becoming a Category 4 storm with winds of 130 mph as it rumbled toward Canada. The center of the storm missed the mainland U.S., but it hit Puerto Rico as a Category 1 in mid-September, leaving the entire island without power and at least 25 people dead.