‘Darby and the Dead’ is predictable, but fun enough 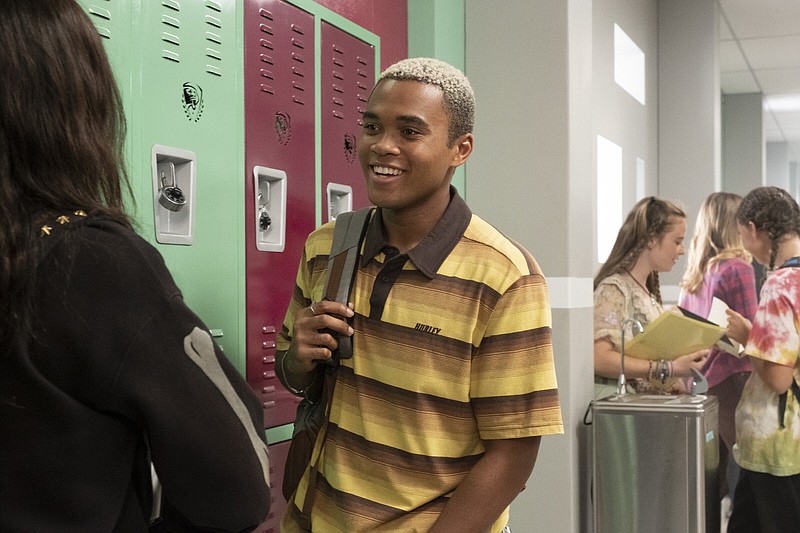 Socially awkward transfer student Alex (Chosen Jacobs) has a crush on the introverted girl who can see — and talk to — ghosts in the supernatural teen comedy “Darby and the Dead.”

It's officially December, and I think I can safely say I'm done with high school rom-coms. And that's not a knock on "Darby and the Dead," which I found to be a fun, if predictable, movie.

After "Do Revenge," "Crush," "Anything's Possible," "Sneakerella," "Turning Red," and now "Darby and the Dead," I think I'm a little burnt out on watching high school kids party, sort into cliques and work through romantic entanglements. That's not to say any of those are bad movies. I'm just collectively ready to put high school rom-coms off until ... February 2023, maybe? I'll sort it out.

To its credit, "Darby and the Dead" comes with a unique enough hook. Our central protagonist, Darby (Riele Downs) can see ghosts after dying at a young age and being resuscitated. And she makes a business (more like a nonprofit) out of helping ghosts move on to the afterlife. She'll deliver last messages to loved ones or comfort them in a unique way. Darby owns this at the cost of being one of the weirdos in high school.

One day in the locker room at school, head cheerleader and queen bee Capri (Auli'i Cravalho) is accidentally electrocuted by her hair straightener. Capri dies right in front of her clique, and, of course, Darby.

That evening, Capri shows up at Darby's bedside in a rather harsh manner. And she asks Darby, whom she bullied quite a bit, to bring her back to life. Of course, Darby doesn't possess this ability. When Darby tells Capri she can help her move on, the former queen bee decides she will ... after her sweet seventeen birthday party.

Capri wants one last bash for everyone to remember how awesome she was and to dance beside her high school sweetheart, James (Asher Angel) before moving on to the great beyond. So, Capri tasks Darby with becoming popular, becoming friends with all her old besties, and convincing them to throw the birthday bash in her honor. And, as anyone who has ever seen a high school rom-com knows, this will involve Capri giving Darby a makeover and lessons on how to be cool and fashionable.

If "Darby and the Dead" didn't have a supernatural element, and if it wasn't anchored by Downs' performance, it would have been a standard by-the-numbers film that teetered off the edge of the road into disappointing territory. Fortunately, there are ghosts (including a funny minor role from Wayne Knight), and Downs is hilarious. Both of these things keep the movie on track and enjoyable.

Keeping "Darby and the Dead" fresh through all its tropes is our main character working to solve problems for ghosts. It's interesting and unique as far as high school rom-coms go. And Downs had me laughing with her constant snark and even pulling off an entertaining fourth-wall break, which goes a step further than I expected, at the movie's end.

"Darby and the Dead" also offers some solid representation, with the two film leads being people of color And the film also casts Nicole Maines as Piper, one of the popular girls. Piper is a trans girl who just exists in the movie without her gender identity being a big deal.

In fact, I remember snorting and laughing at her introduction because the scene was so amusing. You wouldn't know Piper was trans were it not for a single line. While Capri's friends are changing in the locker room, Taylor (Kylie Liya Page) laments that the tampon in her bag has gone missing. She's wearing white jeans. You can see how this would be an issue.

She asks one friend for a tampon without luck. And when Taylor asks Piper if she has a tampon, without even looking up from her phone, Piper responds, "Nope. Still trans." The simple response had me giggling at how deadpan it was delivered.

Where "Darby and the Dead" falls short is in the writing of Capri's character. It shouldn't have been difficult to turn Capri from an unlikable bully to a sympathetic best friend throughout the course of this film. I feel like several high school rom-coms have pulled off that transition easily enough.

But Capri is written unevenly. She essentially takes Darby hostage and forces her to go through an upheaval of her entire life, promising to haunt and harm her if she doesn't get her way. Darby doesn't want to commit to spending a month rearranging her life for one single ghost to move on, but Capri can essentially push and pull Darby's body down into toilets and up into the air. She's downright toxic to Darby until the main character is forced to give in to this ridiculously shallow plan.

And, to be clear, none of this is an issue with Cravalho's performance. She's great in a rom-com as proven in "Crush," which I reviewed earlier this year.

The film tries to give Capri some redemption at the end by saying she helped Darby make friends and gain a social life. But the only "friends" Darby made as a result of her forced transformation were shallow characters who only liked the ghost whisperer once she became popular.

The fact of the matter is Capri almost ruined the one friendship Darby was set to make on her own in a fellow weirdo named Alex (Chosen Jacobs). Capri has a couple of touching moments with Darby, but by the time the credits roll, she's had no earned character arc. She left me frustrated.

Fortunately, Darby works around this with witty lines and ties to the paranormal. And Tony Danza helps as well, playing a sort of grandfatherly friend to Darby throughout the film. He has more heartwarming moments than Capri does.

I'm confident in saying "Darby and the Dead" evens out into a net positive worth watching at least once. The film is on Hulu today (but probably should have been released before Halloween). 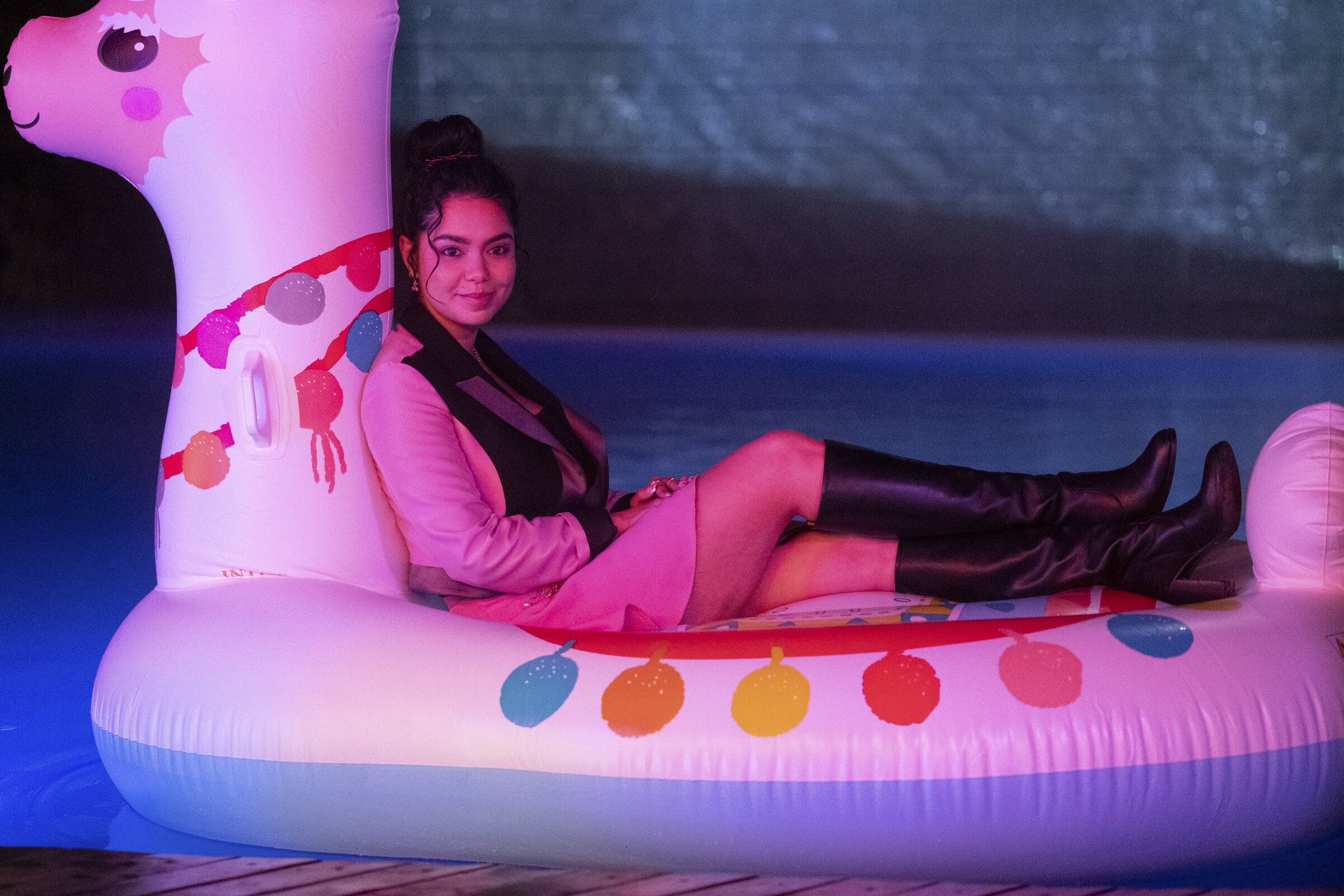 When popular Capri (Auli’i Cravalho) unexpectedly dies in a freak hair straightening accident, her upcoming “Sweet 17” party is naturally canceled. But, from the other side, Capri works to convince her friends to proceed with the party as planned in “Darby and the Dead.”

Print Headline: ‘Darby and the Dead’ is predictable, but fun enough