OPINION | REVIEW: ‘Johnny Cash: Redemption of an American Icon’ is a spiritual bio-pic 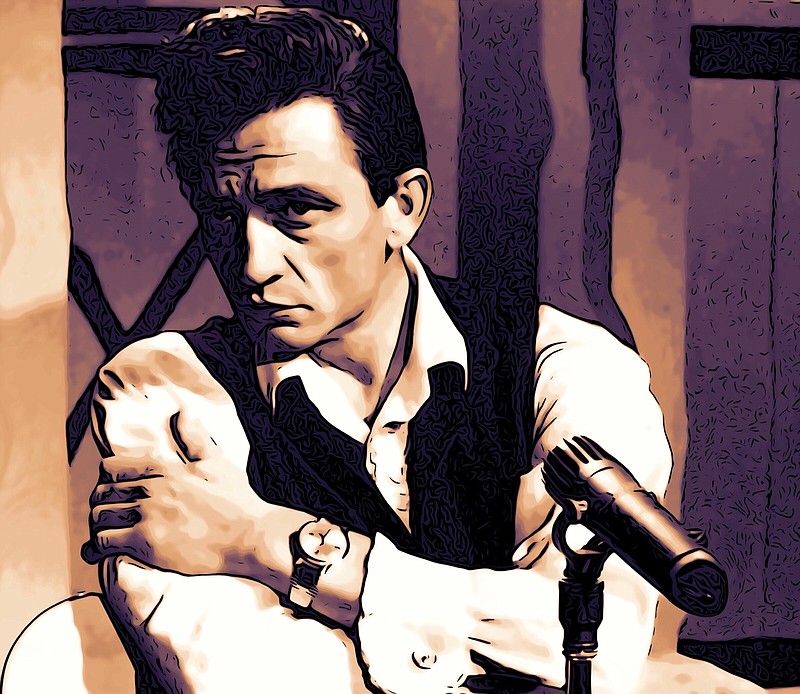 The Nickajack Cave story is familiar to most people who have a personal relationship with Johnny Cash.

Neither did Greg Laurie, the pastor who wrote the book "Johnny Cash: The Redemption of an American Icon," which has been made into a documentary with the same title. It's an unabashedly faith-based film, and while that might put some people off, given the subject matter I'm not sure there's a better approach.

Laurie is a producer and presumably the driving creative engine behind the film, though he enlists Australian Ben Smallbone as director and cinematographer. Smallbone has directed a lot of music videos for his brothers Joel and Luke who comprise the Christian pop duo For King & Country, and he co-directed the 2017 documentary "Steve McQueen: American Icon," another movie companion to a Laurie book.

In the introduction to his Cash book, Laurie, who "came to faith" in 1969 as the Jesus Movement was sweeping through southern California (see the 2021 documentary "The Jesus Music" and next year's "Jesus Revolution," which is based on another Laurie book and stars Joel Courtney, who plays one of the kids in Steven Spielberg's "Super 8," as a younger version of the preacher), admits he never even got "within shouting distance of" Cash.

Maybe so, because Cash probably would have taken to Laurie. Especially in 1969, which was after Johnny Cash had his road to Damascus moment in the Nickajack Cave.

Cash went into that Tennessee cave to die. It was, probably October 1967, though I've heard it was a month earlier or a few months later. He was at a low point in his life. His divorce from first wife Vivian Liberto had come through and she'd quickly remarried. He was estranged from his four daughters (who were taunted as "Cash trash" in school). He was in love with June Carter, but she was alarmed by his heavy drinking and addiction to dexedrine, so he was living with similarly afflicted Waylon Jennings.

He made a plan. He parked his Jeep and crawled deep into the cave for three hours, Finally his flashlight gave out. Exhausted, he lay down in the dark. He didn't intend to come out. He finally fell asleep, waiting to die.

Obviously he didn't. As he told the story, he felt a powerful presence while in the cave, and became convinced that while he had distanced himself from God, God had never left him. He experienced a feeling of clarity, and as he crawled out he felt he was guided by a mysterious light.

Miraculously, I guess, when he emerged from the cave, June Carter and Mother Maybelle were waiting there with food and water. They'd come to look for him. At least that's how the parable goes.

It's an important moment in understanding Cash's development, and it is interesting in that within a few months Cash would arguably be the world's most popular recording star, with a prime-time variety show on ABC.

It's the pivotal moment in this well-made, admittedly unconventional documentary, which isn't a biography so much as a brief for the importance of Cash's Christian faith in his work. And it's well-edited and shot, with some insightful interviews with Cash's younger sister Joanne Cash Yates (who with her husband, the late Dr. Harry Yates, founded the Nashville Cowboy Church in 1990), and his son John Carter Cash.

The film does an especially good job sketching out Cash's Arkansas childhood in Dyess, detailing his uncomfortable relationship with his taciturn father and his closer one with his elder brother Jack. Jack determined from an early age that he was meant to preach the gospel, while JR -- as his family called him-- exhibited a gift for music early on.

When JR was 12, Jack was cut in two in a sawmill accident. The film suggests that after Cash's Nickajack Cave sojourn, Cash integrated his brother's dream into his own. He could both preach the gospel and sing on the radio.

So the first 40 minutes flashes by, a sprightly edited collage of archival footage mingled with contemporary interviews with the likes of Sheryl Crow, Wynonna Judd, Tim McGraw and Alice Cooper, narrated by longtime Cash intimate Marty Stuart (who was married to Cash's daughter Cindy for five years during the '80s).

While dedicated Cash fans are unlikely to learn much new about Cash's early career, it is enjoyable to see the images and hear the voices recounting the high points. In the book that spawned the film, Laurie writes that he's not aiming to present an expanded Wikipedia-page look at the artist, but the first part of his movie does a good job of doing just that.

Cash did approach Sam Phillips with the idea that he'd be a gospel singer; Phillips did tell him to come back with more secular ideas and a couple of musicians. (And Phillips did change "Folsom Prison Blues" from the dirge-like 12-bar blues Cash imagined to a mid-tempo chugger that allowed for some hopefulness. Cash liked his version better, but Phillips had the right idea, and soon self-described "song stylist" Johnny Cash was a force on the charts.)

After the Nickajack Cave when Cash came out a changed if not perfected man, the film concentrates more on what we might consider Cash's ministry, his social justice stands, his affinity for convicts, his friendship with Billy Graham and the poor, and his whole "Man in Black" campaign to better the world, up to his Rick Rubin-abetted late career renaissance and beyond.

It's a movie that makes a case -- and makes it well except for one niggling point. Laurie insists this is the untold -- or at least under-told -- story of Johnny Cash. I'd counter that Cash's Christianity was never something you could overlook. He wouldn't let you.

More than 20 years ago, I described him as an "American Rasputin," oscillating between "iniquity and redemption, between the dark urges of the flesh and the thrill of intimacy with the divine." Cash understood that sin was necessary, because without sin there can be no forgiveness. Your transgressions can bring you closer to God.

This was apparent in all his work, even the Shel Silverstein songs he sang. Of all the first generation OGs of rock 'n' roll, Cash was the one most like us. To risk blasphemy, he was the most Christ-like of those figures -- one who seemed the most like us. Cash was a man, not a demon like Little Richard or a demi-god like Elvis. His bone-deep voice, his not quite handsome face, his lumbering, almost stolid stage presence: he was no Jumping Jack Flash.

Cash was never an innocent; there was always a dark controlling intelligence. His rumbling eloquence always seem hard-won and provisional. I always thought Cash's gospel music felt like a stab at atonement; an act of contrition rather than joyful noisiness. He sings those songs with a little grudge in his voice, a little broken human edge.

They aren't always his best songs, but they are important songs for anyone who wants to understand the artist. Cash used them as a kind of talisman, a smear of lamb's blood on his door. He was, after everything, a Christian.

And I can think of any number of stories we could tell each other about Johnny Cash. Someone should do a Vivian Liberto movie; I'd like to see a feature about that fatherless household, those years when Johnny was on the road and sinning hard.

But this is Greg Laurie's movie. It's a truth.

‘Johnny Cash: The Redemption of an American Icon’ 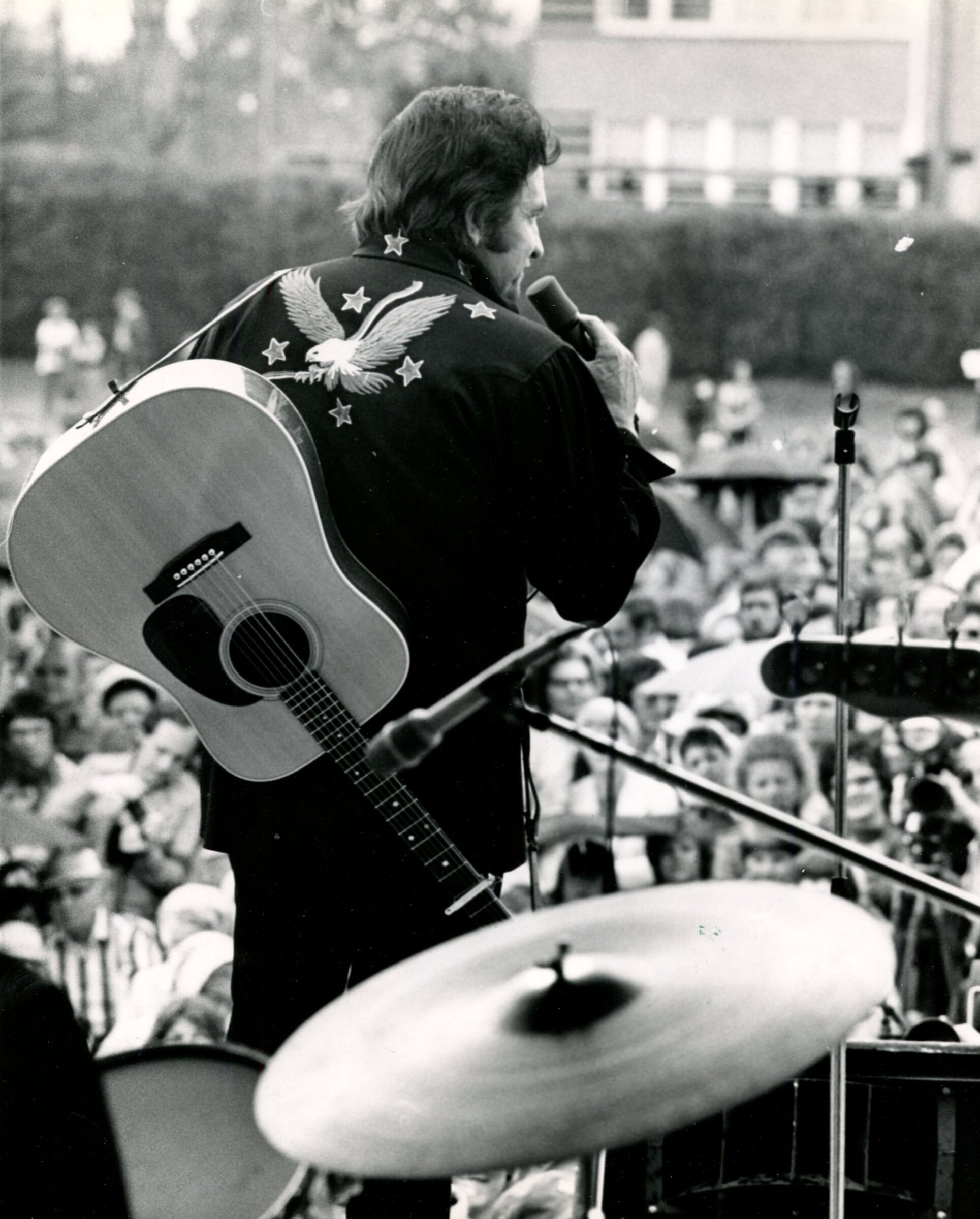 Johnny Cash played a lot of prison shows, performing for free because he felt an affinity for the prisoners. But though some people assume that he must have done time — and he was arrested at least seven times for drug and alcohol offenses — Cash never went to prison except to play a show. 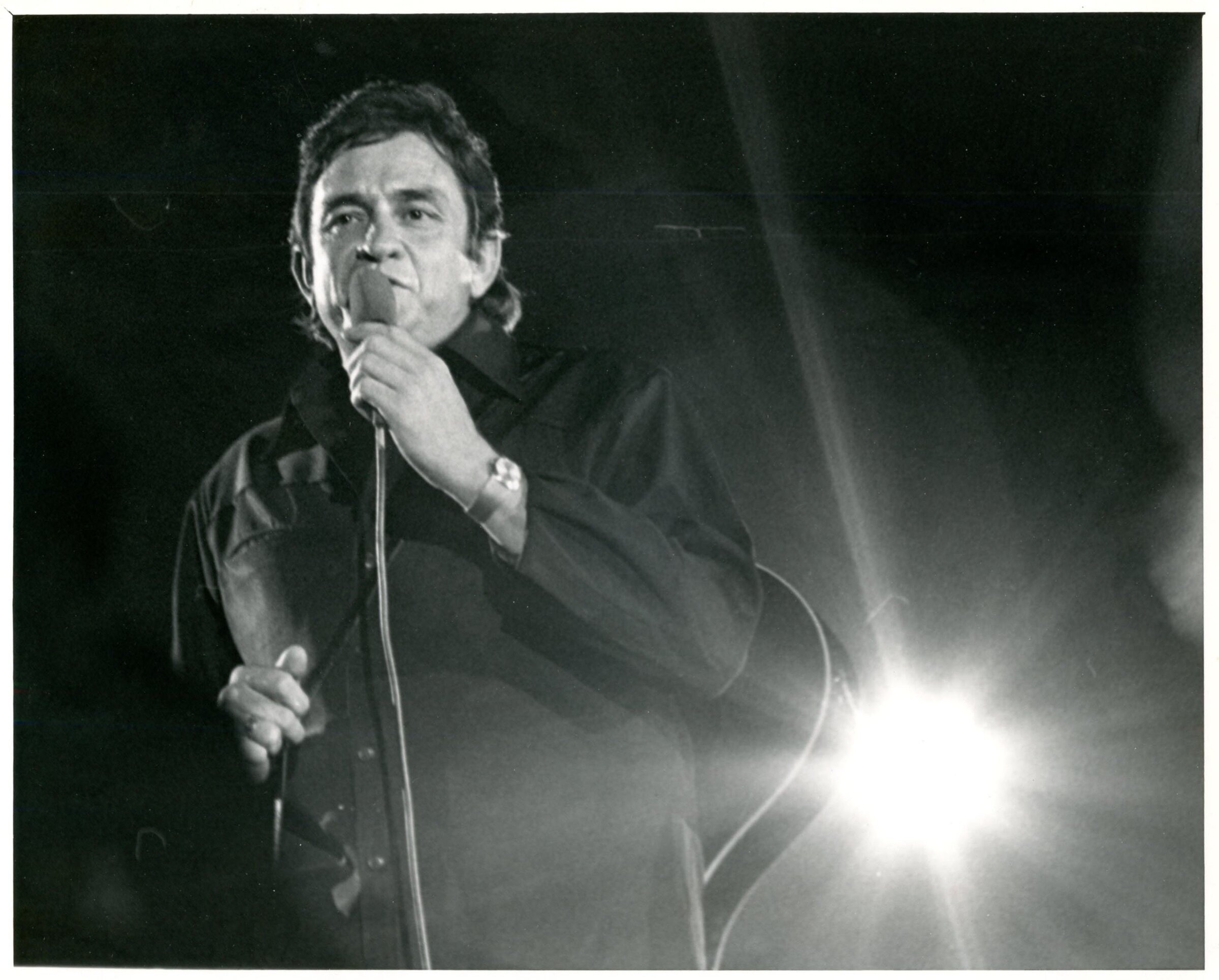 Man in Black: Johnny Cash performs at Mid-South Fairgrounds in Memphis in October of 1971. At the time he was arguably the most popular pop musician in the world.

Print Headline: Out of the dark