THEATER REVIEW: Arkansas Repertory Theatre's 'Guys and Dolls' is a sure bet 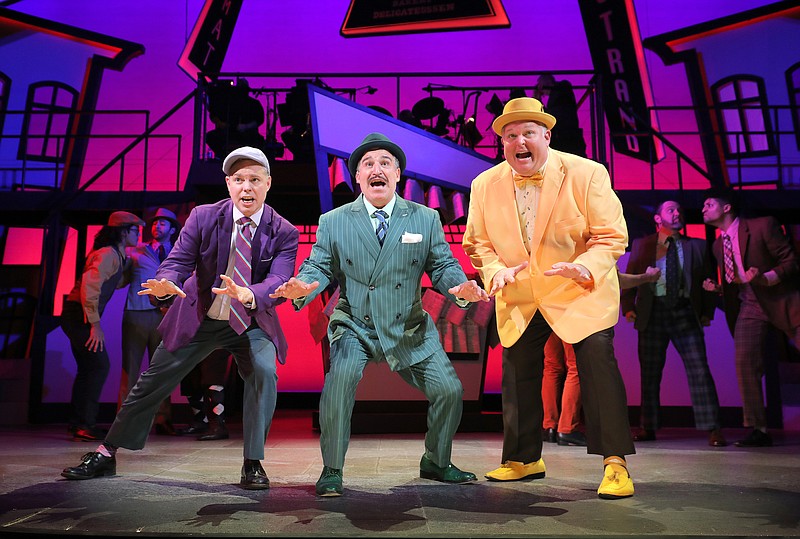 Ben Grimes (from left) as Benny Southstreet, Carlos Lopez as Nathan Detroit and P. Jay Clark as Nicely-Nicely Johnson seek a place to mount “the oldest established, permanent floating crap game in New York” in “Guys and Dolls” at the Arkansas Repertory Theatre. (Special to the Democrat-Gazette/Stephen B. Thornton)

There are many shows worth a gamble on local stages this holiday season, but “Guys and Dolls” at the Arkansas Repertory Theatre is a sure bet.

The quintessential Golden Age musical (music and lyrics by Frank Loesser, book by Jo Swerling and Abe Burrows, based on a story by and characters of Damon Runyon) gets a glorious staging from director/choreographer (and Hendrix College alum) Gustavo Zajac and a diverse cast of nearly two dozen. The cast’s talented locals actually outnumber the out-of-towners (that list includes a few Broadway veterans).

The show’s success also rests with Michael Riha’s obtuse-angular set, and on the six-piece band whose stand is on the set’s upper level. Stacey Herrison’s costumes, particularly the “Take Back Your Mink” outfits, are worth singling out for praise; however, the Save-a-Soul missionaries look like they’re from a long-lost house at Hogwarts.