Chinese authorities penalize Lin as they try to stop protests by Compiled by Democrat-Gazette staff from wire reports | December 3, 2022 at 3:50 a.m. 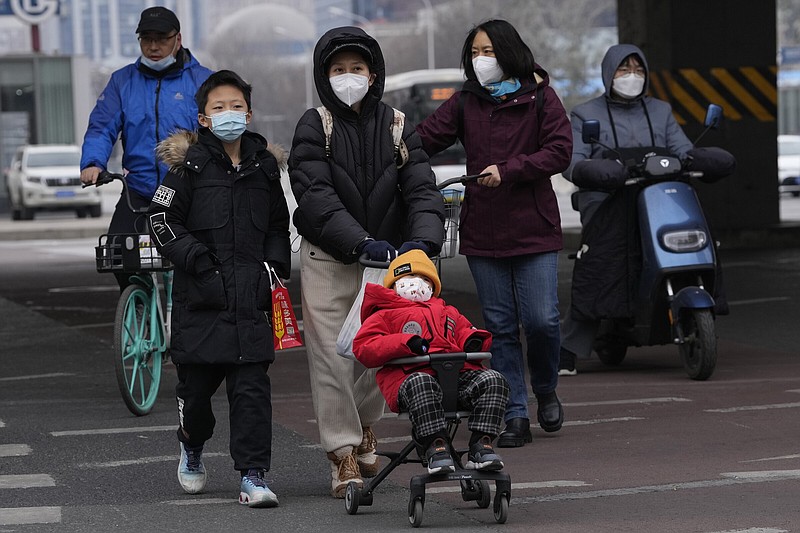 A family walks across the street Friday in Beijing. (AP/Ng Han Guan)

BEIJING -- Former NBA star Jeremy Lin, who plays for a Chinese team, was fined $1,400 for criticizing quarantine facilities, China's professional league and a news report said Friday, as the government tries to stop protests against anti-virus controls that are among the world's most stringent.

Also Friday, more cities eased restrictions, allowing shopping malls, supermarkets and other businesses to reopen following protests last weekend in Shanghai and other areas in which some crowds called for President Xi Jinping to resign.

The ruling Communist Party is trying to crush criticism of the human cost and disruption of its "zero covid" strategy, which has confined millions of people to their homes.

Protesters have been detained and photos and videos of events deleted from Chinese social media. On Friday, there were no signs of more protests.

Lin, who plays for the Loong Lions Basketball Club, made "inappropriate remarks about quarantine hotel-related facilities" where the team stayed Wednesday ahead of a game, the China Basketball Association announced. It said that "caused adverse effects on the league and the competition area."

The association gave no details of Lin's comments and there was no sign of them on his account on the Sina Weibo social media platform.

The Shanghai news outlet The Paper reported Lin posted a video complaining about hotel workout facilities ahead of games next week in Zhuji, a city south of Shanghai in Zhejiang province.

"Can you believe this is a weight room?" Lin was quoted as saying. "What kind of garbage is this?" The Paper said the video was deleted after "the situation was clarified" that the hotel was only for a brief stay required by regulations.

A representative of Vision China Entertainment, which states online that it represents Lin, didn't respond to a request for comment. Phone calls to Loong Lions headquarters in the southern city of Guangzhou weren't answered.

Lin, born in California to parents from Taiwan, was the first American of Chinese or Taiwanese descent to play in the NBA.

Lin played for the Golden State Warriors, New York Knicks and Toronto Raptors. He became the first Asian American to win an NBA championship with the Raptors in 2019. He played for the Beijing Ducks in 2019 before joining the Loong Lions.

A top official at the World Health Organization said the U.N. agency was "pleased" to see China loosening some of its coronavirus restrictions, saying "it's really important that governments listen to their people when the people are in pain."

At a press briefing Friday, WHO emergencies director Dr. Michael Ryan said the organization was glad to see China "adjusting their current strategies" in trying to recalibrate their response to covid-19.

China's case numbers are low, but "zero covid" aims to isolate every infected person. That has led local officials to suspend access to neighborhoods and close schools, shops and offices.

The Chinese government reported 34,980 infections found in the past 24 hours, including 30,702 with no symptoms.

Manufacturers including the biggest iPhone factory use "closed-loop" management, which requires employees to live at their workplace without outside contact.

Residents of some areas complain that local officials impose excessive quarantines and other restrictions in response to a spike in infections that began in October.

Xi's government has promised to reduce the cost and disruption of controls but says it will stick with "zero covid." Health experts and economists expect it to stay in place at least until mid-2023.

China's home-grown vaccines have proven to be less effective.

Ryan said using imported messenger RNA vaccines, like those made by BioNTech-Pfizer and Moderna, would be a "solid option" for China to boost its immunization coverage.

China has been developing its own version of an mRNA vaccine and has yet to authorize either of the shots made by Western companies.

Unlike in many Western countries, vaccination rates among China's elderly are lagging; only 66% of people over 80 have got one shot, while 40% have received a booster, according to China's National Health Commission.

By comparison, 93% of Americans 65 and over have received a full course of vaccine and another 2% have at least one dose, according to the Centers for Disease Control and Prevention.

Globally, WHO chief Tedros Adhanom Ghebreyesus said about 90% of the population now has some kind of immunity to the coronavirus via prior infection or vaccination, and the world is inching closer to the end of the pandemic.

Information for this article was contributed by Joe McDonald and staff members of The Associated Press.