IN THE GARDEN: Fairly cold hardy Camellia sasanqua is just about to bloom 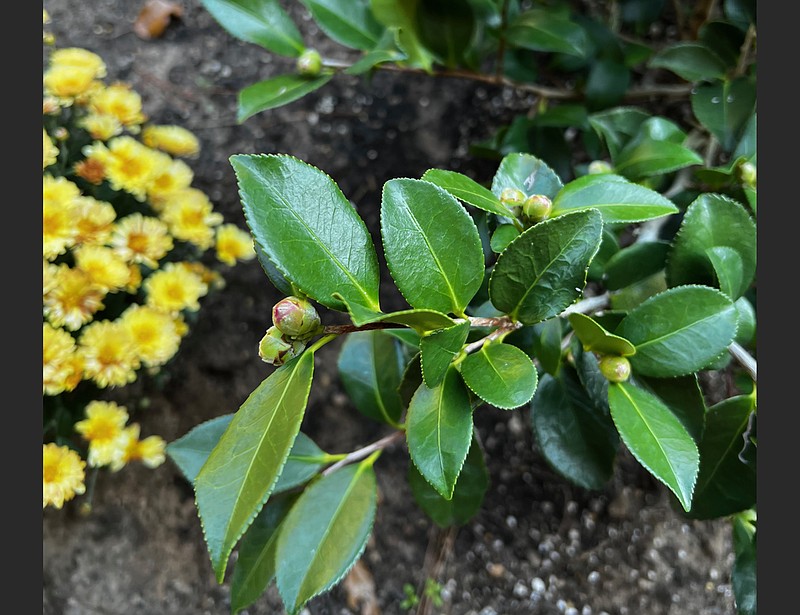 Camellia sasanqua typically blooms between October and December and is fairly cold hardy. (Special to the Democrat-Gazette)

Q: This camellia was planted early last spring [the reader sent a photo]. Its first set of buds became leaves. I'm hoping this second set of buds will become flowers. I've read that they bloom between October and December. I bought the plant from a large nursery out on Cantrell Road where it was in a hot-house environment, so my other question is how cold tolerant is this plant? Right now it seems to be very healthy, but should I shelter it from the cold? Your advice is always appreciated.

A: Your plant is a sasanqua camellia, which is hardier than the Japonica camellias. The buds in this picture are flower buds and should open soon. It has been an unusual late fall/early winter with colder than normal temperatures. Normally my sasanqua camellias are blooming by now, but I only have one open flower and loads of flower buds. Each plant is different, but you should be seeing color soon.

Q: Is there any consumer product that prevents acorns' sprouting? It seems I am pulling or digging all spring and summer to rid my lawn and shrub beds of this scourge.

A: I would not recommend using a pre-emergent herbicide to prevent acorns from sprouting. Pre-emergent herbicides prevent many seeds from germinating, but timing is critical. Meanwhile, acorns are a food source for many animals. If every acorn that fell actually sprouted you would be absolutely blanketed by oak trees. Typically, acorns will germinate and sprout in the early spring. If you can mow or hit them with your weed-eater soon after sprouting, it will cut off the first seed leaf (cotyledon) and stop growth. If you allow them to put on several sets of leaves, it takes a bit more diligence to get rid of them.

Q: The boxwoods at our home are approximately 23 years old and have always been healthy. This year we noticed there were more boxwoods with sections of brown leaves, dead limbs. Then we noticed this one, which appears to be dying. [The reader sent a photo.] Can you hazard a guess what could kill the entire plant? Thank you.

A: I would definitely say the one plant is dying or dead. I can't say with certainty from the picture, but it looks more like a small-leafed holly (yaupon or helleri) than a boxwood -- they can look similar. I would suggest you dig up the one plant, and take samples from its upper portions as well as some roots and the crown of the plant. Take all that to your local county extension office and let them send the sample in for diagnosis. There are several diseases or cultural conditions that can lead to death. The problem could be root related. When you dig it up, look at the root system to see if the roots are healthy and full or rotted. Could drainage be an issue? Did anything change in your watering habits this season?

Q: What is this? [The reader sent a photo.] I've been seeing this tree a lot recently but don't know what it is. Could you please identify it for me?

A: The tree in question is a red maple. Not all red maples turn red in the fall, but there are many named cultivars that have been bred for outstanding fall color. They have been spectacular this year, and lasting way longer than normal. I was surprised after we had an early freeze that so many leaves persisted and actually continued to change colors. Interestingly enough, some species of trees did not have much color this fall, but the maples have been outstanding.