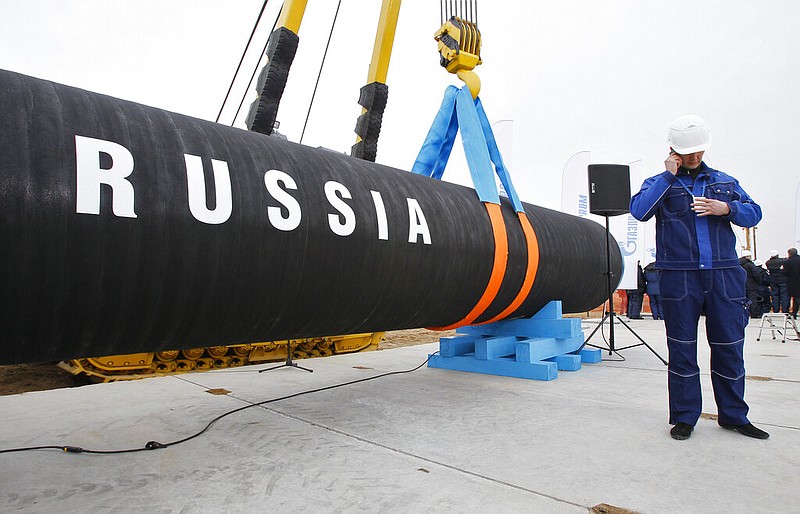 A Russian construction worker speaks on a mobile phone during a ceremony marking the start of Nord Stream pipeline construction in Portovaya Bay, about 106 miles northwest of St. Petersburg, Russia, in this April 9, 2010 file photo. (AP/Dmitry Lovetsky)

WASHINGTON -- The Group of Seven nations and Australia joined the European Union on Friday in adopting a $60-per-barrel price cap on Russian oil, a key step as Western sanctions aim to revamp the global oil market to prevent price spikes and starve President Vladimir Putin of funding for his war in Ukraine.

Europe needed to set the discounted price that other nations will pay by Monday, when an EU embargo on Russian oil shipped by sea and a ban on insurance for those supplies take effect. The price cap, which was led by the G-7 wealthy democracies, aims to prevent a sudden loss of Russian oil to the world that could lead to a new surge in energy prices and further fuel inflation.

U.S. Treasury Secretary Janet Yellen said in a statement that the agreement will help restrict Putin's "primary source of revenue for his illegal war in Ukraine while simultaneously preserving the stability of global energy supplies."

The agreement comes after a last-minute flurry of negotiations.

Poland long held up an EU agreement, seeking to set the cap as low as possible. After more than 24 hours of deliberations, when other EU nations had signaled they would back the deal, Warsaw finally relented late Friday.

A joint G-7 coalition statement released Friday states that the group is "prepared to review and adjust the maximum price as appropriate," taking into account market developments and potential impacts on coalition members and low- and middle-income countries.

"Crippling Russia's energy revenues is at the core of stopping Russia's war machine," Estonian Prime Minister Kaja Kallas said, adding that she was happy the cap was pushed down a few extra dollars from earlier proposals. She said every dollar the cap was reduced amounted to $2 billion less for Russia's war chest.

"It is no secret that we wanted the price to be lower," Kallas added, highlighting the differences within the EU. "A price between 30-40 dollars is what would substantially hurt Russia. However, this is the best compromise we could get."

The $60 figure sets the cap near the current price of Russia's crude, which recently fell below $60 a barrel. Some criticize that as not low enough to cut into one of Russia's main sources of income. It is still a big discount to international benchmark Brent, which slid to $85.48 a barrel Friday, but could be high enough for Moscow to keep selling even while rejecting the idea of a cap.

There is a big risk to the global oil market of losing large amounts of crude from the world's No. 2 producer. It could drive up gasoline prices for drivers worldwide, which has stirred political turmoil for U.S. President Joe Biden and leaders in other nations.

Europe is already mired in an energy crisis, with governments facing protests over the soaring cost of living, while developing nations are even more vulnerable to shifts in energy costs. But the West has faced increasing pressure to target one of Russia's main moneymakers -- oil -- to slash the funds flowing into Putin's war chest and hurt Russia's economy as the war in Ukraine drags on.

The costs of oil and natural gas spiked after demand rebounded from the pandemic and then the invasion of Ukraine unsettled energy markets, feeding Russia's coffers.

U.S. National Security Council spokesman John Kirby told reporters Friday that "the cap itself will have the desired effect on limiting Mr. Putin's ability to profit off of oil sales and limit his ability to continue to use that money to fund his war machine."

More uncertainty is ahead, however. Covid-19 restrictions in China and a slowing global economy could mean less thirst for oil. That is what OPEC and allied oil-producing countries, including Russia, pointed to in cutting back supplies to the world in October. The OPEC+ alliance is scheduled to meet again Sunday.

That competes with the EU embargo that could take more oil supplies off the market, raising fears of a supply squeeze and higher prices. Russia exports roughly 5 million barrels of oil a day.

Putin has said he would not sell oil under a price cap and would retaliate against nations that implement the measure. However, Russia has already rerouted much of its supply to India, China and other Asian countries at discounted prices because Western customers have avoided it even before the EU embargo.

Most insurers are in the EU or the United Kingdom and could be required to participate in the price cap.

Russia also could sell oil off the books by using "dark fleet" tankers with obscure ownership. Oil could be transferred from one ship to another and mixed with oil of similar quality to disguise its origin.

Even under those circumstances, the cap would make it "more costly, time-consuming and cumbersome" for Russia to sell oil around the restrictions, said Maria Shagina, a sanctions expert at the International Institute for Strategic Studies in Berlin.

Robin Brooks, chief economist at the Institute of International Finance in Washington, said the price cap should have been implemented when oil was hovering around $120 per barrel this summer.

"Since then, obviously oil prices have fallen and global recession is a real thing," he said. "The reality is that it is unlikely to be binding given where oil prices are now."

European leaders touted their work on the price cap, a brainchild of Yellen.

"The EU agreement on an oil price cap, coordinated with G-7 and others, will reduce Russia's revenues significantly," said Ursula von der Leyen, president of the European Commission, the EU's executive arm. "It will help us stabilize global energy prices, benefiting emerging economies around the world."

Russia said Friday that Western demands that it should pull out completely from Ukraine as part of any future talks to end the war effectively rule out any such negotiations, as Russian strikes continued and a Ukrainian official set his country's battle losses at up to 13,000 troops.

Kremlin spokesman Dmitry Peskov reiterated that Putin remains open to talks but the Western demand that Moscow first withdraws its troops from Ukraine is unacceptable.

Peskov's comments came as Putin spoke on the phone Friday morning with German Chancellor Olaf Scholz. Scholz's office said he made clear to Putin "that there must be a diplomatic solution as quickly as possible, which includes a withdrawal of Russian troops."

On Thursday, Biden also indicated that he would be willing to talk with Putin if he demonstrated that he seriously wanted to end the invasion and pull out of Ukraine.

A statement issued by the Kremlin after the phone call with Scholz said Putin again blamed the West for encouraging Ukraine to prolong the war by supplying it with weapons.

Putin also said recent crippling Russian strikes on Ukraine's infrastructure were "forced and inevitable" after Ukraine allegedly bombed a key bridge to the Crimean peninsula -- which Russia seized from Ukraine in 2014 -- and energy facilities.

Russian forces have been bombarding Ukraine's critical infrastructure since October, leaving millions without electricity amid cold winter weather. Scholz's office said that in the phone conversation with Putin he "condemned in particular the Russian air attacks on civilian infrastructure" in Ukraine and said Germany was committed to continuing to help Ukraine defend itself.

Russian forces kept up rocket attacks on infrastructure and airstrikes against Ukrainian troop positions along the contact line, the Ukrainian general staff said Friday, adding that Moscow's military push has focused on a dozen towns including Bakhmut and Avdiivka -- key Russian targets in the embattled east.

Since Russia invaded Feb. 24, between 10,000 to 13,000 Ukrainian soldiers have been killed in action, said Mykhailo Podolyak, a top adviser to Ukrainian President Volodymyr Zelenskyy, citing military chiefs. The Ukrainian military has not confirmed such figures and they were far below estimates from Western leaders.

The last comment from an official on Ukraine's military casualties dates back to late August, when the head of the armed forces said nearly 9,000 military personnel had been killed.

Zelenskyy's office reported Friday that at least three civilians were killed and 16 wounded in Ukraine in the past 24 hours. Kyrylo Tymoshenko, the office's deputy head, said on Telegram that Russian forces had attacked nine southeastern regions with heavy artillery, rockets and aircraft.

Ukrainians have been bracing for freezing winter weather as Russia's campaign has recently hit infrastructure including power plants and electrical transformers, leaving many without heat, water and electricity.

Ukraine has faced a blistering onslaught of Russian artillery fire and drone attacks since early October. The shelling has been especially intense in Kherson since Russian forces withdrew and Ukraine's army reclaimed the southern city almost three weeks ago.

In the eastern Donetsk region, Ukrainian governor Pavlo Kyrylenko said Russian shelling has intensified significantly. The Russian army is seeking to encircle the key town of Bakhmut by capturing several surrounding villages and cutting off an important road.

In a press briefing Friday in Kyiv, United Nations-backed human rights investigators called for the creation of a "victim's registry" that could help people affected by the war receive help quickly. Pablo de Greiff, a member of the team mandated to look into rights abuses by the Human Rights Council, said "victims have needs that require immediate attention."

Information for this article was contributed by Raf Casert, Fatima Hussein, David McHugh, Aamer Madhani and Jamey Keaten of The Associated Press. 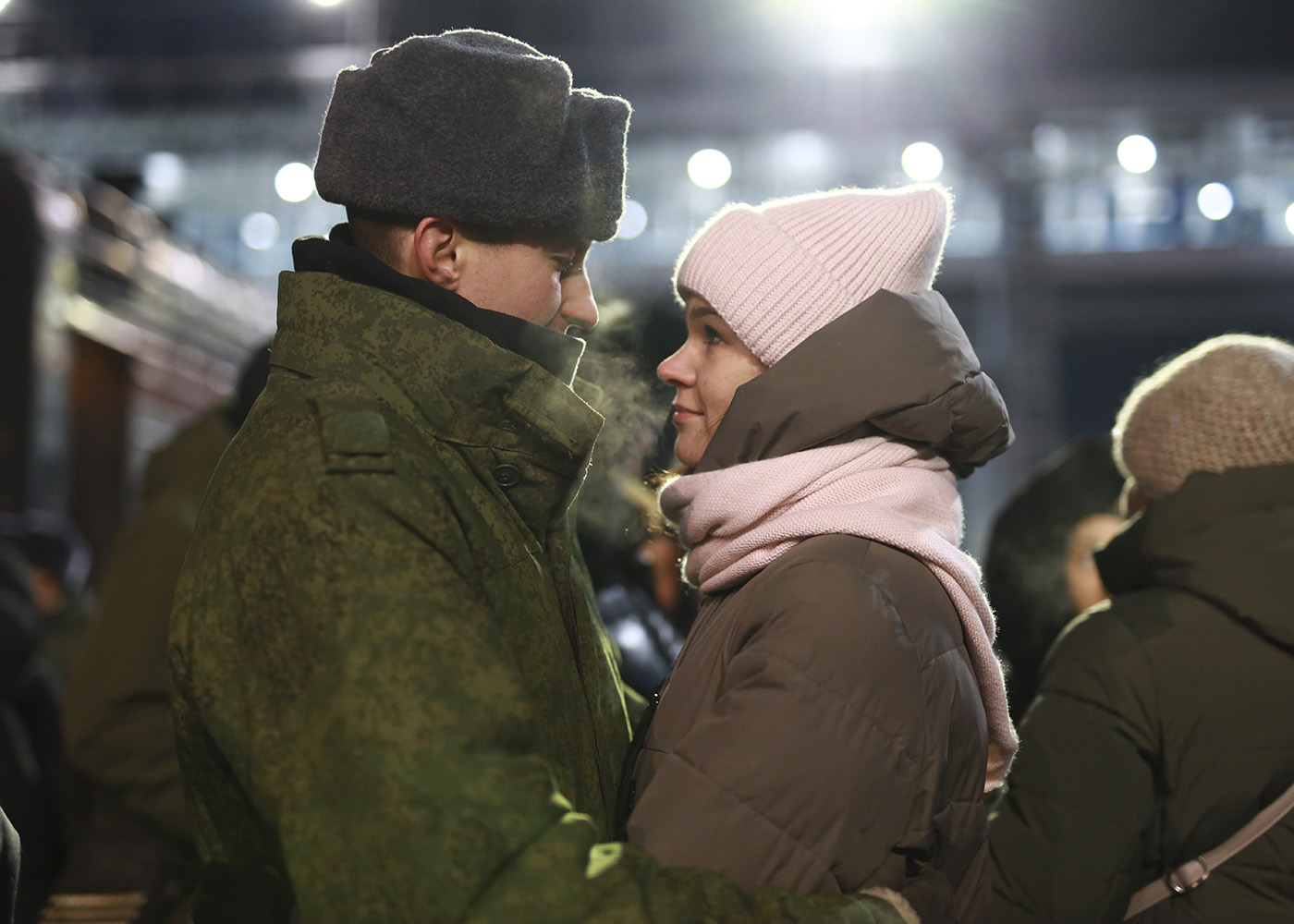 A couple embrace Friday at a railway station in Tyumen, Russia, as recently mobilized Russian soldiers get ready to board their train. More photos at arkansasonline.com/ukrainemonth10/. (AP) 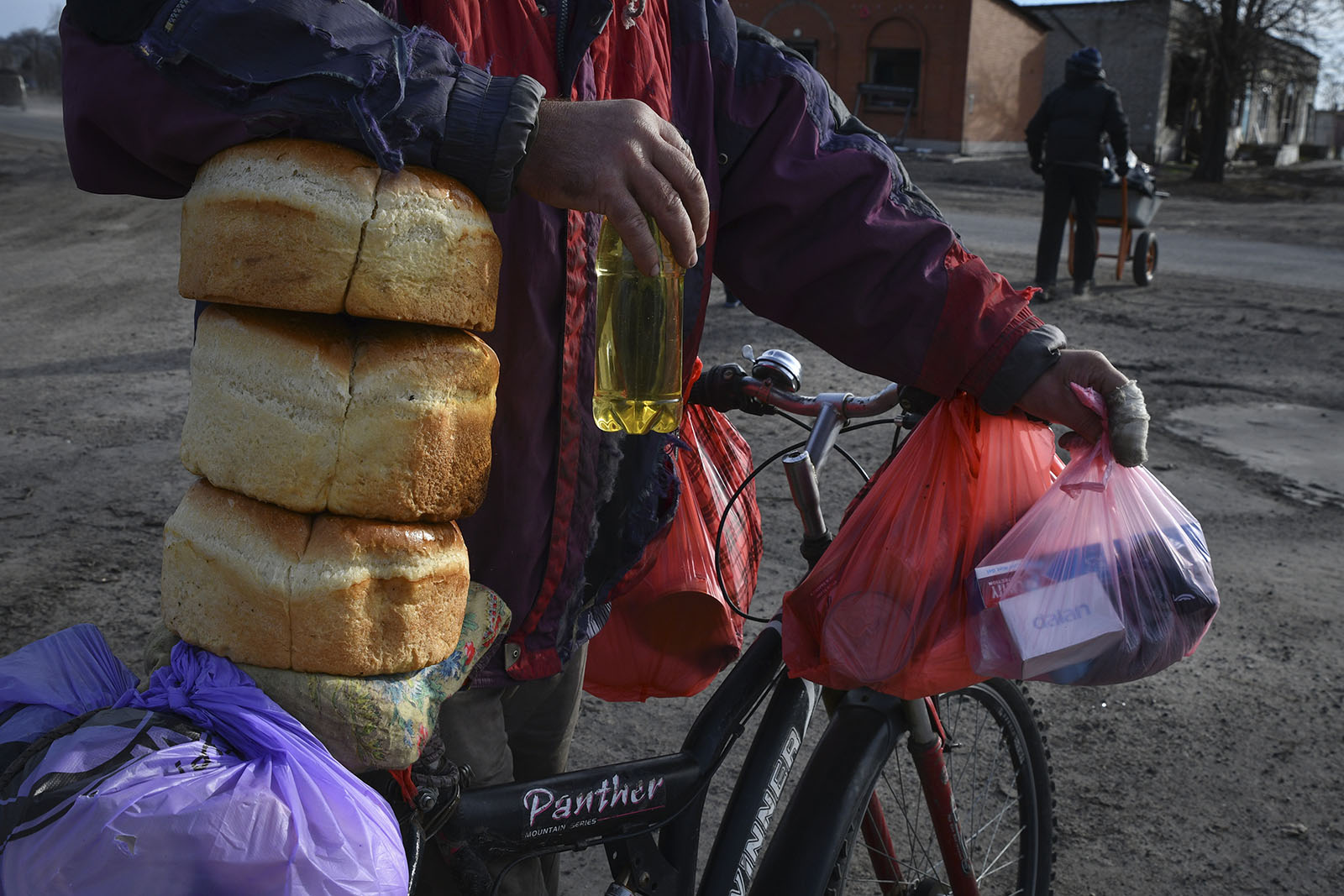 A resident gets food and juice Friday at a mobile humanitarian aid point in the village of Zarichne in the Donetsk region of Ukraine. (AP/Andriy Andriyenko)