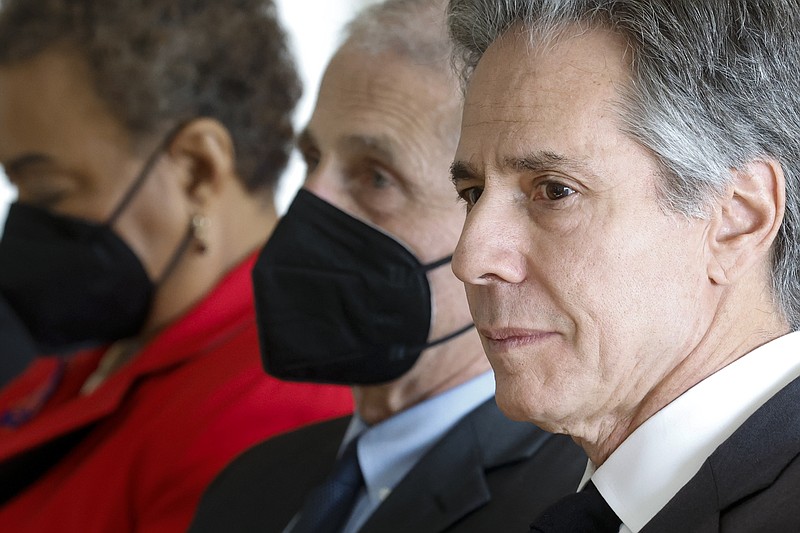 WASHINGTON -- The Biden administration placed a Russian paramilitary organization Friday on a list of religious freedom violators alongside a number of notorious terrorist organizations.

Secretary of State Antony Blinken announced he had designated the Wagner Group as an "entity of particular concern" for its activities in the Central African Republic. Also on the list are Afghanistan's Taliban, Nigeria's Boko Haram, Somalia's al-Shabab and two factions of the Islamic State group.

"Our announcement of these designations is in keeping with our values and interests to protect national security and to advance human rights around the globe," Blinken said. "Countries that effectively safeguard this and other human rights are more peaceful, stable, prosperous and more reliable partners of the United States than those that do not."

The Wagner Group is run by a confidant of Russian President Vladimir Putin, Yevgeny Prigozhin, and its mercenaries are accused by Western countries and United Nations experts of numerous human-rights abuses throughout Africa, including in the Central African Republic, Libya and Mali.

Friday's designation does not immediately carry U.S. sanctions but opens up those targeted to potential penalties for violations of religious freedom. The Wagner Group and the other "entities of particular concern" are already subject to an array of U.S. sanctions.

In addition to his designation of the Wagner Group and the others, Blinken identified China, Cuba, Eritrea, Iran, Burma, Nicaragua, North Korea, Pakistan, Russia, Saudi Arabia, Tajikistan and Turkmenistan as "countries of particular concern" for religious freedom violations.

All of those countries, which Blinken said have "engaged in or tolerated particularly severe violations of religious freedom," have been on the list previously.

Blinken also put Algeria, the Central African Republic, Comoros and Vietnam on a "special watch list" for religious freedom violations, meaning they could eventually be hit by U.S. sanctions unless their records in the area improve.