Rainwater got a taste for advertising while working with The Country’s Best Yogurt by Werner Trieschmann | December 4, 2022 at 8:16 a.m. 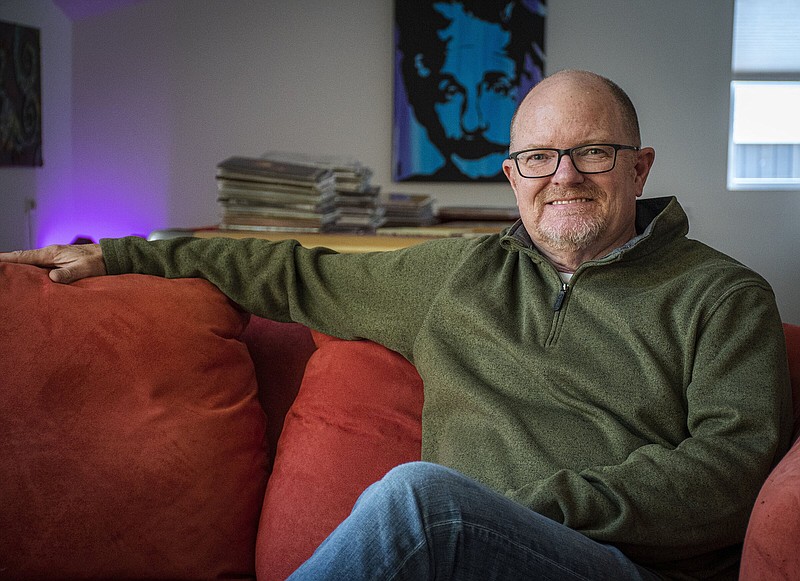 Let's take a moment and send a special shoutout to yogurt. Yes, we mean the sweet confection that perhaps you'd push a few people aside to secure a cup of blueberry with nuts and chocolate chips. You scream, I scream, we all ... uh, go nurts for yogurts.

We also have yogurt to thank -- OK, in part, to thank -- for the notable advertising and promotions career of David Rainwater.

"Almost right out of college, I got hired to be a temp on the TCBY (The Country's Best Yogurt) account," Rainwater says. "That account was a dynamic piece of business. I was soon an assistant account executive and then the actual account executive [for TCBY] moved on and I took her place. I moved up quickly after that."

The taste for the ad business thanks to that TCBY account only grew for Rainwater, who recently celebrated 34 years working for Little Rock's Mangan Holcomb Partners/Team SI. Rainwater has been a partner at the 50-year-old agency for 22 years and a CEO there for over 20 years.

MHP/Team SI has expanded during Rainwater's tenure, now employing over 160 working out of offices in Little Rock, Rodgers and Florida. Rainwater's firm is one of the oldest and largest marketing agencies in the state.

"David has been integral to our company's strategic growth," says C.C. "Chip" Culpepper, chief creative officer at MHP/Team SI. "He's been a genuine catalyst and vision leader and instrumental in expanding our portfolio of services -- and in establishing the strong management team we have today."

Celebrating its 50th birthday, MHP/Team SI is kicking off a special giving campaign by committing over $50,000 in monetary donations and more than $50,000 in in-kind marketing services to local nonprofits and community organizations. In his time with the company, Rainwater has been one of the leaders as the marketing firm has donated time and money to a variety of causes.

"As mentors here, we try to lead by example," Rainwater says.

Rainwater has logged hours on numerous nonprofit boards including the Arkansas Repertory Theatre and the Argenta Community Theatre.

"David and I have always been kindred spirits, but looking across our team, we all value so many of the same things both personally and professionally, including a deep commitment to community service. That is something I believe has bled over, and ultimately has found expression in our fundamental corporate DNA."

STANDING UP IN THE FRONT SEAT

Rainwater was born in 1959 in Fort Smith. Most of his life, from that first day up until he graduated from high school, he grew up in a series of different houses in different towns, most of them small and in Arkansas.

"I am the product of my two parents who were and are Methodist pastors," Rainwater says.

Rainwater, the oldest of three boys in his house, says he became used to being "the new kid," adjusting at regular intervals to new circumstances, teachers, friends and neighborhoods.

"I got hauled around everywhere," Rainwater recalls of his earliest days. "This was back before day care. I remember spending a lot of time car traveling. I was the kid that stood up in the front seat."

Though he says he "marks time by the houses we lived in," Rainwater could see the value of his parents' work.

"My parents were both such dedicated public servants," Rainwater says. "My mom is 80 years old and still the pastor of two churches in Arkansas east of Jonesboro. What they did [as pastors] goes way beyond delivering the message on Sunday. It was a 24-hour job. People called us with issues and needed help and they hurt."

That example of service is still fresh in Rainwater's mind.

"The lesson I took away from them is that we all have a responsibility to make things better."

Rainwater says that he had "a broad set of interests" when he was in school. A good student in math and English, Rainwater also played sports -- baseball and football -- but he was more interested in pulling off grander schemes.

"In fifth grade, I formed a club to pick up trash," Rainwater recalls. "I had jackets for the club made. The time we were supposed to get together to do this was on the weekends when school was out. Kids were like 'It's Saturday, there are cartoons on.'"

Organizing other kids to put on fairs to raise money or pick up trash excited young Rainwater. Others would have shied away from seemingly impossible projects that Rainwater was happy to take on.

"I came up with what I thought were brilliant ideas," Rainwater says. "My dad would pat me on the head. I was learning how to build things mostly."

Rainwater was the kind of dreamer who thought that learning how to repair a car in sixth grade would be easy.

"In the sixth grade, I called and was talking to a wrecking yard, a junk yard with cars. I was gonna buy an old car and learn how to fix it. I called to see if I could have the car dragged to our backyard. My dad found out what I was planning and was like, 'Uh, no.'"

To be moving to a new house and new town every year is one thing when you are in elementary or middle school -- it's quite another when you are 16.

"Being the new kid is hard when you are starting your sophomore year in high school," Rainwater says.

The good news was that Rainwater was going off to college once he picked up his high school diploma.

"Our family were real proponents of education," Rainwater says. "My dad and his two siblings were the first generation to graduate from college in their family. It was never forced on us but going on to college was valued. I watched as my dad went back to college. I watched as my mom went to night school. She graduated from college when she was 42."

Rainwater graduated from high school after 11th grade and figured he might go to the University of Arkansas at Fayetteville and study to be an architect. He enjoyed his drafting classes and building things had always been the best way to spend hours of time.

"I applied to Hendrix and the idea of a small campus and an academically challenging environment appealed to me," Rainwater says.

After one year at Hendrix, Rainwater decided to transfer to nearby University of Central Arkansas. Rainwater then put college on hold to "take a break and sort out what I wanted to do next."

The next thing turned out to be a job with the Arkla gas company. College papers and textbooks were promptly traded in for a suit and a tie.

"I was a runner for a couple of executives there," Rainwater recalls. "I was delivering stuff and picking them up at the airport. I got to see how the business worked. I observed these people who were highly successful. I did that for four and half years."

Rainwater would eventually return to college, taking classes at night. Before long, he had a degree in business advertising and public relations from the University of Arkansas at Little Rock. He notes that within a week of his graduation he was working in a Little Rock advertising agency. He didn't start out with an office.

"My desk was in the hallway next to the men's room. The person next to me was Chip Culpepper. It was crazy chaos all the time. You worked 70 hours a week and didn't think twice about it."

The pressure to produce, to be creative on demand didn't and doesn't bother Rainwater. It's an environment where he thrives.

"If you are an adrenaline junkie like me this industry is perfect," Rainwater says. "Everything changes and there is always a problem. You always start with, 'What is the problem I have to solve today?' That is a rush. There are highs and lows equally."

Looking back at his years at MHP/Team SI, Rainwater isn't inclined to name a specific client as an example of company prowess. Instead, he points to "difficult times in the '90s" and takes pride in how his agency survived when others fell by the wayside.

Rainwater's ability to be proficient in more than one thing has impressed his colleagues.

"I would describe David as a Renaissance man," says Sharon Tallach Vogelpohl, current president and CEO of MHP/Team SI. "He has a freakish ability to master pretty much anything he sets his mind to -- from media to music to master woodworking to flipping houses. David is currently leading the initiative to transform the agency's headquarters offices on the Arkansas River from inspiring space he envisioned 20 years ago to a modern, hybrid-friendly 'collaboratory' that helps team members focus their time in-office on the four C's: connection, collaboration, creation or celebration with teammates or clients."

Even while taking on the day-to-day issues at his marketing agency, Rainwater hasn't let his energy dip for helping out others where he is needed.

"I started out on boards like Camp Aldersgate," Rainwater says. "I love that organization. I supported arts organizations, particularly the performing arts. I was on the board of the Argenta Community Theater. I took over a board seat at [The Arkansas Repertory Theatre] when the Rep was going through some things. There was a capital fundraising campaign that was successful. I loved every minute of that."

Rainwater is particularly proud of being a co-founder for Amp Out Alz, an annual fundraiser for Alzheimer's Arkansas, a nonprofit support group for caregivers. The idea for Amp Out Alz is a music concert and an event that would raise money but also be a networking moment where Alzheimer's caregivers could share information.

"A lot of charity events are $150 plate dinners," Rainwater says. "The Amp Out Alz tickets are much less. The purpose of Amp Out Alz was to bring people together so they would know better the Alzheimer's Arkansas organization."

Rainwater is a happy warrior, content to, as he says, "come up with ideas for talented people to work on." This attitude guides new hires at his marketing agency. They are expected to want to do more than simply clock in and clock out.

"You need to have a passion project," Rainwater says. "We will give you time and money and resources. Go do something big. Go make a difference."