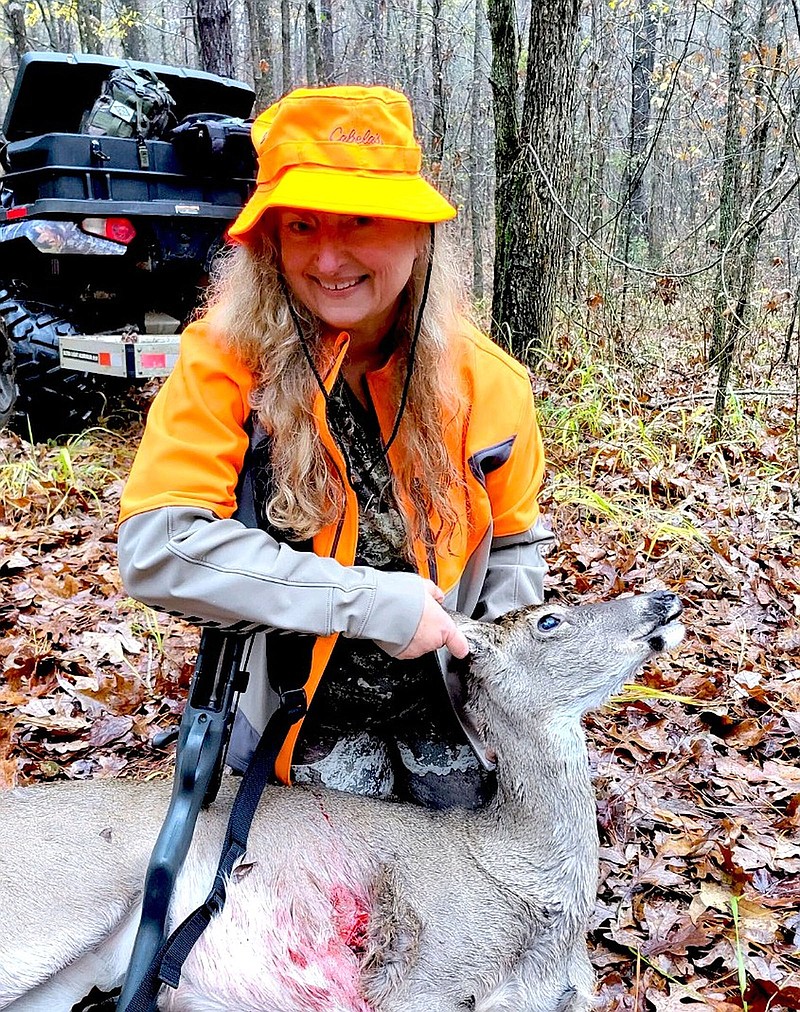 Lisa Saldivar of Houston is a quick study.

In September, Saldivar, a 1983 graduate of Little Rock Central High School, visited her parents in Little Rock. Saldivar had recently taken up shooting and had planned a couple of sessions at the Arkansas Game and Fish Commission's shooting range at Mayflower with her stepfather Mike Craig .

Saldivar's gun was a Pre-1964 Winchester Model 70 Featherweight chambered in 30-06. It does not have a recoil pad, only a metal butt plate. It kicks violently. Saldivar struggled to hit paper at 50 yards.

After many shots, I told Saldivar to close her eyes and look away. I opened the bolt and quietly removed a cartridge from the chamber.

Saldivar screwed her eye into the scope and put a death grip on the rifle. She was as tense as a watch spring. She inhaled deeply and exhaled several times. Finally, she squeezed the trigger. There was only a click. Saldivar flinched mightily and looked confused. She opened her bolt and found the chamber empty. She was angry, believing Craig and I had pranked her.

"It shows you how bad you flinch," I said. "You're terrified of your gun."

When Saldivar returned to Houston, she sold her Winchester and bought a Steyr bolt action rifle chambered in 300 Winchester Short Magnum. It's considerably more powerful than a 30-06, but she said it is better suited to accomplish her goals of taking an elk and a brown bear. Also, the Steyr stock is better designed to minimize recoil. She installed a Leupold 3HD 8-24x50 scope.

On Oct. 19, Saldivar visited a range near her home. Through text messaging I helped her dial in her scope. She shot her first bullseye, and then adjusted the reticles to hit 2 inches high. She retired the target to a prominent place in her garage where she said, "I can look at it every day."

The one-day session involved firing 20 rounds over 4 1/2 hours at distances of 50-600 yards. Woolley shot the first three rounds at 50 yards to evaluate the ballistic coefficient of Saldivar's ammo. She used Winchester Deer Season brand. That is consumer grade hunting ammo and certainly not something a serious long-range shooter would choose.

On paper, it's a better choice than it seems. This ammo features a 150-grain, all-copper bullet. Most 150-gr. lead bullets are short and squat with low ballistic coefficients. Because copper is less dense than lead, a 150-gr. copper bullet is much longer than an equal weight lead bullet. Its higher ballistic coefficient should give it a flatter arc.

At 100 yards, Woolley shot five more rounds to zero in Saldivar's scope. Then it was her turn to shoot.

At 400 and 600 yards, a lot of factors affect accuracy. Natural dispersion is one. Because a rifle bullet spins in flight, it naturally pulls to one side. Imperfections in the bore also alter its path. Wind pushes a bullet to one side or the other. It can also push it down faster than gravity. This all makes it hard for a novice to shoot accurately at those distances.

"Jim would say, 'You're hitting the target,' but each time he looked at me with the strangest expression," Saldivar said.

On Nov. 19, Saldivar attended the Precision Rifle Shooting Expo at Navasota, Texas. She "test-drove" a Barrett MRAD 6.5 Creedmoor, a precision long-range rifle. It was raining, and the wind blew 15 mph. On her second shot, Saldivar hit a target at 1,000 yards.

Enamored with long-range shooting, Saldivar believed she needed a tool that was tailored for that purpose. She bought a Savage Long Range Hunter chambered in 6.5 Creedmoor. It's as fine a rifle as can be built outside of a custom shop. Saldivar topped it with a Vortex Strike Eagle 5-25x56. With the scope and bipod, the package weighs about 18 pounds.

While sighting it in, Saldivar shot one-hole groups at 100 yards.

On Nov. 29, Saldivar visited the Old Belfast Hunting Club in northern Grant County for her first deer hunt. I took her to my stand in a pine thicket known as The Thin. Saldivar insisted that she would only shoot a mature buck. She intended to convert it's skull and antlers to a European mount herself.

One does not simply dial up a mature buck, especially of the quality Saldivar wanted.

"Absolutely not!" Saldivar said. "I want a buck!"

"They're all does," Saldivar said. "That one on the edge is standing still!"

Saldivar's shot was perfect. Minutes later, she checked her kill on the Arkansas Game and Fish Commission's mobile app.

Hunters joke that the 300 WSM kills on both ends. Blood poured from a deep wound on Saldivar's forehead. Her scope cut her almost to the bone. Even so, she insisted on field dressing the deer herself, another first. Back at camp, she slugged down two shots of Irish whiskey to dull the pain, and then she went to the emergency room for stitches.

On Thursday, we went to a farm in Prairie County owned by my friend Bob Rogers of Maumelle. Bigger bucks inhabit that area, but none appeared that day.

Back at the shop, under the lights, Matt Gladish of Hazen peered with disbelief at Saldivar.

"Girl, what happened to you?" Gladdish asked.

Saldivar turned away and lowered the bill of her cap.

"Don't you turn away from me," Gladdish said with a laugh. "Is that a scope bite?"

Saldivar nodded meekly, prompting a round of playful, profane teasing.

"It looks almost like a 6," Gladdish shouted. "It's the mark of the beast!"

"A lot of times when you take a hit like that, it'll cause you to start flinching," Rogers said. "You need to jump right back in that saddle and get your confidence back."

Gladdish and Rogers insisted she shoot her Steyr immediately. Saldivar's form was rock solid, without a hint of a twitch. All of the men congratulated her heartily, but Saldivar was piqued over the teasing. She felt slighted.

"No way," I said. "It's happened to all of us. You're in the club. That wasn't ridicule. That was respect!"

Print Headline: Mark of the beast