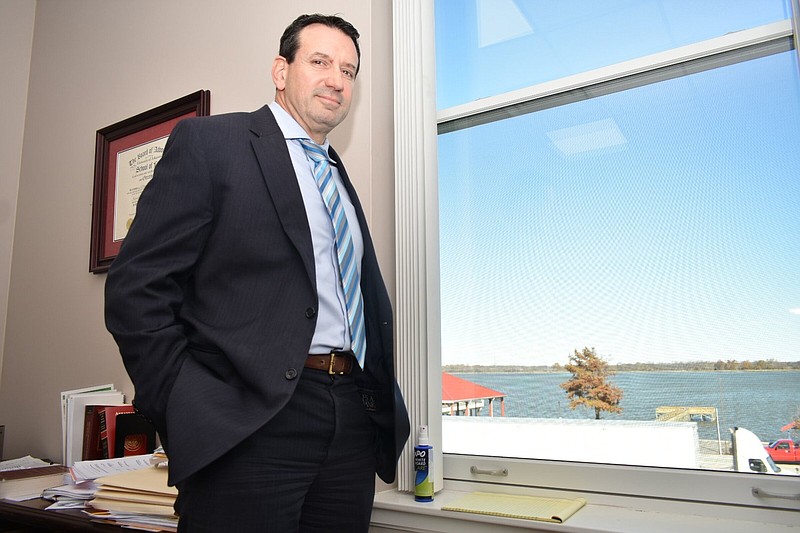 Living in North Little Rock, Will Jones knew for a long time he wanted to become prosecuting attorney in Arkansas’ Sixth Judicial District.

“A lot of times, a lot of people get a calling confused with something they really want to do,” Jones, 47, said. “For me, I do think it was a calling because I worked in an office for so long. I wanted to be part of the leadership change from Larry Jegley because I worked for him for so long. I know how he runs the office, and there are so many good things about that. I wanted to make sure there was somebody good in place to carry on the baton after him. I really just felt like that was me.” A majority of voters in Pulaski and Perry counties thought so, too.

With 53.5% of the vote, Jones won a close race over public defender Alicia Walton in May to succeed the retiring Jegley as prosecuting attorney. Jones will leave his role as 11th Judicial District West (Jefferson and Lincoln counties) chief deputy prosecutor on Dec. 21 and be sworn in as the Sixth District’s top attorney Jan. 1.

“Going back to that office, in a lot of ways, is like going back home for me,” said Jones, a native of Murfreesboro. “Most of my career has been spent in that office.” Before he sought the PA office in Pulaski County, Jones felt he needed to return to such an environment after spending more than seven years leading the cybercrimes unit in the Arkansas Attorney General’s office, first under Dustin Mc-Daniel and then Leslie Rutledge.

“I was flattered Kyle [Hunter, the 11th West prosecutor] called me and that he had enough faith in me that I could do this job,” Jones said. “That was certainly something that attracted me to it. I also wanted to know for myself if I could still do the heavy day-to-day work of a prosecutor’s office because I had a very intense docket and work in Pulaski County. But when I went to the AG’s office, I was traveling around a lot and I had much lower case numbers than I had, and I kind of needed to know if I was still cut out for this because I knew I wanted to run for Pulaski County’s prosecutor’s office.” Jones’ decision to come to Pine Bluff “was the best thing that could have happened,” he said.

Hunter, who ran unopposed for re-election in May, sought someone with Jones’ experience to handle a large caseload as Jefferson County dealt with the early stages of the pandemic.

“We had just gone through a covid shutdown, so we had gone through a lot of cases that had not been resolved because we weren’t having jury trials in Jefferson County,” Hunter said. “And then we had another 20 to 30 homicides in the covid years, so it was important to me to get somebody with some trial experience who tried those types of cases. [Jones] fit the bill for that. So, I was thrilled to death when I made the call and he agreed to come here.” Hunter hired Jones in January 2021, aware his new chief deputy would run for prosecutor in Pulaski County. Still, Jones called his chief deputy “a real asset” who helped the office get through tough times.

“The number of homicide cases that are pending that have been filed is probably over 50,” Hunter said. “There are still some the police are working on that have happened but just haven’t been solved yet. It’s important to have people dealing with those cases who have got experience with that type of case. They can be overwhelming. They require a lot of extra work, a lot more hands-on treatment than what I would call a typical run-of-the-mill case or a battery case, even. In a homicide, you have a lot more technical things that could be involved.”

One case Jones has intensely worked on is the Oct. 5, 2020, slaying of a Pine Bluff police detective. Kevin Collins was shot during an investigation at the Econo Lodge motel on North Blake Street. The suspect, Ke-Shone Smith, is scheduled to stand trial for capital murder and three counts of battery in April.

“I walked in thinking, that’s one I really want to make a commitment to getting resolved before I leave, and I met his mother pretty early on,” Jones said. “She’s a dear, sweet lady. I really wanted to get that resolved before I left, but it just didn’t work out that I was able to do that. That, honestly, is my only regret – and it’s not really a regret because it’s not anyone’s fault. I really wanted to get that one resolved for the family and community before I left, and I’m kind of sorry I didn’t get to do that.

“But they’ll be in good hands. Obviously, there are good attorneys here and Mr. Hunter’s here. The case will be fine without me, but I came in thinking I really want to get some closure for the family and community on that case.”

Jones earned his bachelor’s degree from Henderson State University in 1998 and a juris doctorate from the University of Arkansas law school in 2001. He started his career in the Crawford County prosecutor’s office for nine months before moving into the Pulaski County office under Jegley, where he stayed until going to the AG’s office.

“He’s got all the tools in the toolbox to pick up with what we built all of these years and carry on with the largest prosecuting office in the state,” Jegley said. “This office is large. We have 48 full-time attorneys and seven deputy prosecuting attorneys on a covid backlog. I’m excited he’ll pick things up Jan. 1.” Will Jones’ wife, North Little Rock District Judge Paula Juels Jones, will swear him in shortly after midnight on New Year’s Day. The married couple of 17 years are parents to Caroline, 14, and Collier, 12.

Due to the Jones’ marriage, the North Little Rock city attorney will handle misdemeanor cases instead of Will’s office to avoid conflicts of interest, Will Jones said.

“We hate to see him go, but at the same time, we’re proud of him and we’re happy for him,” Hunter said. “Because there seems to be a connection of violent crime between Pine Bluff and Little Rock, it’d be good for both offices to have a relationship going forward and deal with some of these same people that we see dealing with some of those same crimes in Little Rock and here.” Jones said he’s gained a deeper appreciation for how people in the Pine Bluff area grieve over the violence that occurs. At the time of the interview, however, the number of homicides during 2022 – 21 in Pine Bluff and three elsewhere in Jefferson County – has stalled since Sept. 14.

“This community has been rocked by the violence,” Jones said. I’ve met so many good people, so many families who are sitting in these chairs that [a reporter is] sitting in. … You guys cover it and you guys run stories, and there are so many families behind those stories. We get to see and hear and work with and seek justice for those families. That’s the thing that’s impacted me the most.

“While crime is high in the Little Rock area as well, the connection I’ve been able to gain with the families here in this role will really help me moving forward.”

Hunter said he may structure his office differently following Jones’ departure, asked who would take over as his chief deputy.

“I do have some very talented people here in my office,” Hunter said. “My plan is to set that up in office and put the leadership with the people I got here now. Karres Manning, Jill Reed and Cymber Tadlock have been here for years and have a lot of experience, along with others who are also very experienced. So I may restructure things to put leadership in the hands of several people instead of one chief deputy, and have several division chiefs probably. I think it’ll be good down the road.”