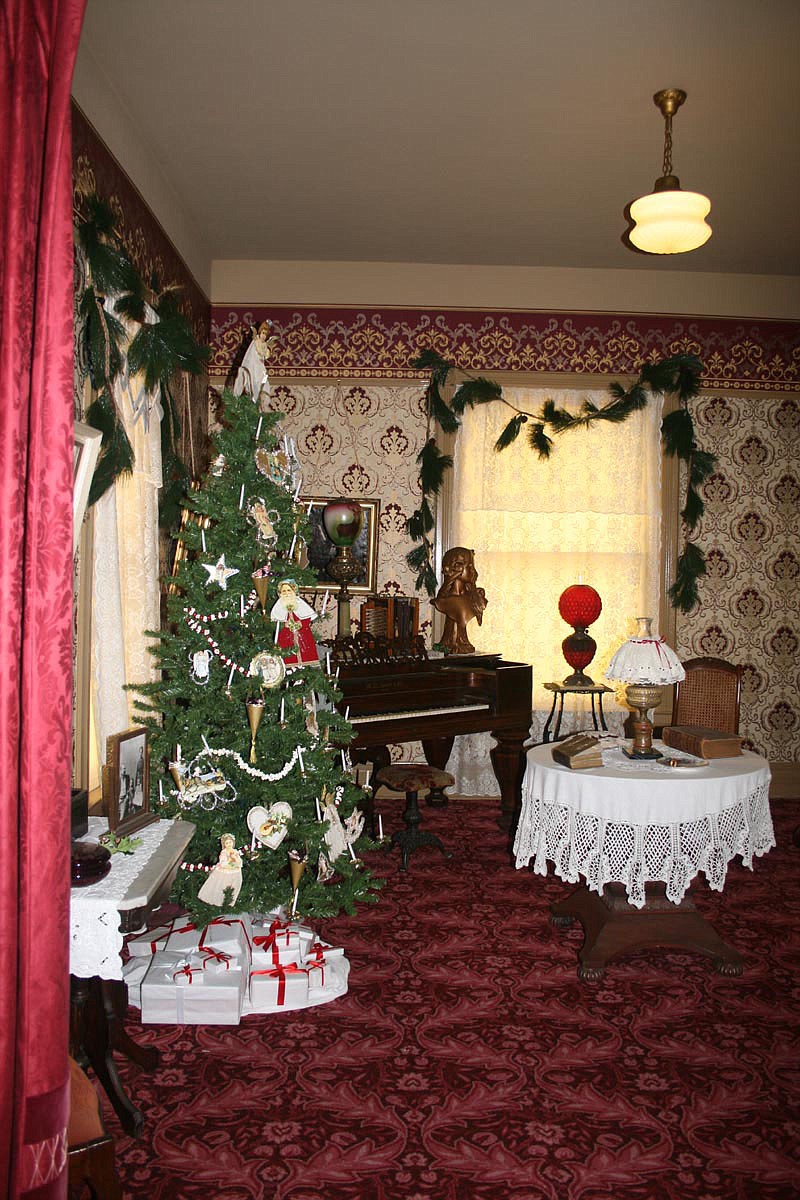 “Most of the Victorian Christmas traditions are really quite similar to ours today,” says Rachel Smith of the Rogers Historical Museum. “We decorate a Christmas tree, give each other store-bought or homemade gifts, and enjoy an elaborate Christmas dinner with our family and loved ones.” (Courtesy Photo)

It's the turn of the 20th century, and the Hawkins family of Rogers would like to invite you into their home for Christmas Eve. They're celebrating around the theme of Clement C. Moore's beloved 1823 poem, "Twas the Night Before Christmas," and their 1895 red brick house features scenes from the story plus holiday customs of the period.

The Hawkins House tour, a Christmas tradition of the Rogers Historical Museum, is based this year on a similar exhibition from 2010, says Rachel Smith, the museum's assistant director and curator of collections.

"People come for the Christmas tour at the Hawkins House year after year to enjoy the house festively decorated for the holidays. We change the tour annually to keep things interesting, with different themes like 'Patriotic Christmas,' 'Victorian Culinary Christmas' and 'A Rogers Christmas.' It will be fun to do this one again!"

Visitors will enter the Hawkins House through the bedroom where, after preparing for the holidays, the family has gone to bed early in anticipation of Christmas morning.

"The Hawkins House only has one bedroom, so the parents slept here while the children may have slept in the back parlor," says Smith in the script for tour guides. "A quilt on the bed will keep them warm during the long winter night, and a nightgown and lantern are set out, ready to dash to the window and look for St. Nick. Just as in the story, 'not even a mouse' is stirring."

In the back parlor, the children are indeed "nestled snug in their beds" with sugar plums, a traditional Victorian treat, dancing over their heads.

"This piece of furniture is a sofa by day and a bed by night," Smith says. "Many families stretched bedroom space by using fold-out or fold-down beds. The children went to sleep with the Christmas tree glittering in the parlor, though not with electric lights. Before the widespread use of electric lights, Christmas trees were lit with tiny candles. This presented quite a fire hazard, so the candles were lit for a short time, then snuffed out before bed."

In the front parlor, a larger-than-life Santa stands by the Christmas tree, "decorated with homemade decorations, including popcorn garlands, paper cornucopias filled with treats, and scrap ornaments trimmed with tinsel, cotton-wool batting and shiny foil," Smith says. "Many families also purchased a few commercial decorations each year, such as tinsel garlands, candle holders and glass ornaments.

"Santa's gifts, seen here poking out of his sack, were usually left unwrapped, so that children could see them first thing Christmas morning," Smith adds. "Under the tree are gifts from one family member to another. At the turn of the 20th century, the common way to wrap a gift was with white paper, tied with red ribbon. [And] since Scotch tape hadn't yet been invented, the packages were secured with straight pins, a prickly danger for eager children!"

The dining room table is set with the best dishes, silver and crystal, Smith says, and the meal would have included many of today's traditional holiday foods -- yeast rolls, potatoes, peas, jellied salads, cranberry sauce and puddings, pies or candy.

"Fancier diners might choose raw oysters, sweetbreads, goose or quail, and Nesselrode pudding, a frozen confection of chestnuts, dried fruit, cream, and sherry that was all the rage in the 1890s," Smith adds.

And finally, in the kitchen, last-minute work is in progress while Christmas songs are playing softly.

"The kitchen is probably my favorite room on this tour because it looks as if the family were just here, stringing popcorn garlands, making ornaments, polishing the silver, and preparing evergreen garlands," Smith says. "Most of the Victorian Christmas traditions are really quite similar to ours today. We decorate a Christmas tree, give each other store-bought or homemade gifts, and enjoy an elaborate Christmas dinner with our family and loved ones."

WHERE -- Rogers Historical Museum and the Hawkins House in downtown Rogers

BONUS -- The Hawkins House will remain decorated for the holidays and open for tours through Dec. 31. Museum hours are 10 a.m.-4 p.m. Tuesday-Saturday.

WHERE — Rogers Historical Museum and the Hawkins House in downtown Rogers

BONUS — The Hawkins House will remain decorated for the holidays and open for tours through Dec. 31. Museum hours are 10 a.m.-4 p.m. Tuesday-Saturday.

Print Headline: All Dressed Up