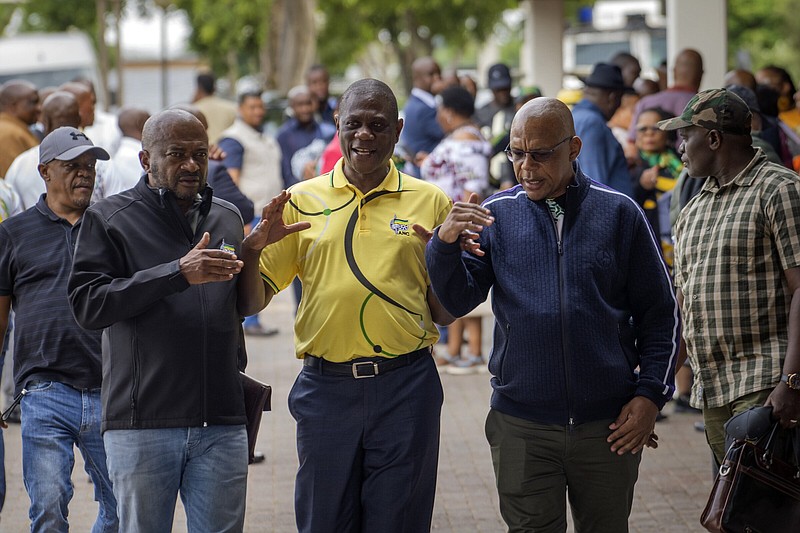 African National Congress (ANC) treasurer general Paul Mashatile, center, walks out following a meeting of the ANC's national executive committee in Johannesburg, South Africa, Friday Dec. 2, 2022. South Africa's president Cyril Ramaphosa, who did not attend the meeting, might lose his job, and his reputation as a corruption fighter, as he faces possible impeachment over claims that he tried to cover up the theft of millions of dollars stashed inside a couch on his farm. (AP Photo/Jerome Delay)

South African President Cyril Ramaphosa no longer plans to resign and will seek a second term as leader of the governing party as he weighs asking the courts to review a report that found there may be a case for his impeachment.

The decision represents an about-face by Ramaphosa two days after he considered quitting in the wake of an advisory panel's report that stated he may have violated the constitution in a scandal involving the theft of at least $580,000 stashed in a sofa at his game farm. The governing African National Congress is scheduled to hold its five-yearly elective conference in two weeks.

"Resigning was one of the many options" the president considered last week his spokesman, Vincent Magwenya, said Saturday by phone. "Now it's off the table."

Ramaphosa has drawn criticism from senior African National Congress officials after the advisory panel's report, including Cabinet minister Nkosazana Dlamini-Zuma, who has said he should resign. Congressional leaders were preparing to meet over the weekend on the outskirts of Johannesburg to discuss their response to the panel's findings, before a vote Tuesday in parliament on whether or not to adopt the report.

On Thursday, investor concerns that Ramaphosa might step down over the scandal triggered the rand's worst one-day loss since May and the biggest selloff of government bonds since 2015. Some of those losses were recouped after key allies closed ranks behind the president.

"Further evidence that the president will fight convincingly to clear his name will lift the rand," Annabel Bishop, chief economist at Investec Bank Ltd., said Friday in a note to clients. "Although risks remain and the elevated political noise has afflicted domestic markets."

Finance Minister Enoch Godongwana said Friday that there was a 10% chance of Ramaphosa leaving office. Those comments came after Gwede Mantashe, the chairman of the governing African National Congress, said it would be premature for Ramaphosa to resign.

The president's decision to continue with plans to seek a second term comes after he received an "unequivocal message" from branches of the party to make himself available to be re-elected as African National Congress president, Magwenya said. Ramaphosa secured the vast majority of nominations for the top congressional job from branches last month.

"The president understands that message to mean he must continue with both the state and economic reforms which are beginning to bear fruit," Magwenya said. "In that regard, the president has with humility and with great care and commitment accepted that call to continue being of service to his organization, the ANC, and to the people of South Africa."

Ramaphosa is also "seriously considering" asking a court to review the findings by the independent panel. A legal review will be crucial for South Africa's democracy since the report is being used to remove a sitting president, he said.

The panel "applied a law that doesn't apply in this case" because it based its report on an act that deals with graft, Thuli Madonsela, director of the Centre for Social Justice at Stellenbosch University, said in an interview with Newszroom Afrika. "If I was involved, I would take the matter on review."

Information for this article was contributed by Amogelang Mbatha of Bloomberg News (WPNS).