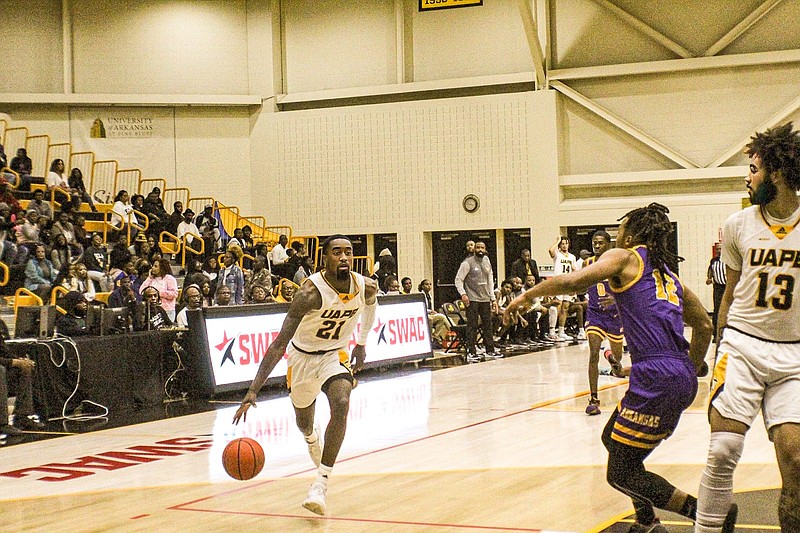 The Golden Lions Shaun Doss goes for a goal in Saturday's game against the Arkansas Baptist College Buffaloes at H.O. Clemmons Arena. (Special to the Pine Bluff Commercial)

The University of Arkansas at Pine Bluff Golden Lions claimed their third win of the season on Saturday, beating the Arkansas Baptist College Buffaloes, 59-41.

Eric Bozeman, the Buffaloes' new coach this year, is the father of Golden Lions Coach Solomon Bozeman and Jeremiah Bozeman, an assistant coach for the Lions.

Ultimately, the sons beat their father for bragging rights at Christmas dinner.

"It's a blessing that you get to play against your dad at this level of college ball," Solomon Bozeman said. "There are not a lot of father-son duos out there. I have to give a shout-out to God that I can do this and he [Eric Bozeman] has been doing it 30 years.

In the first half, the Golden Lions charged after the Buffaloes. Chris Greene dominated the court with 16 points followed by Shaun Doss with 8.

The Buffaloes attempted to keep up with the Lions, but it was almost impossible as the Lions defense held strong with 16 rebounds.

Coming into the second half, Greene kept up the heat he generated during the first half, getting an easy layup. Doss followed with two quick layups to put the Lions up 41-25.

Despite the big lead, the Buffaloes slowly started inching back. Buffalo guard Antonio Howard hit a three-point shot, putting the score at 42-31. Doss quickly answered that basket with a layup.

With 10 minutes left, Buffalo guard Brandon Williams made, with no Lions defenders around him, a basket, putting the Buffaloes within 13 points of the Lions, 46-33.

The Buffaloes focused on rebounding as the Lions lost focus under the basket, missing several opportunities. But the Lions corrected the lost rebounds with a 3-pointer by Zach Reinhart followed seconds later with a slam dunk by Doss. The Lions led 50-33 with 7:18 left in the game.

Doss made a slam dunk with Greene following with a jumper and a 3-pointer to give the Lions another seven points on the board. Greene also made the final points in the game with one made free throw, followed by another foul against the Buffaloes to put Greene back on the line for the final free throw to end the game 59-41.

Greene led the Lions in scoring with 25 points, including 3 3-pointers. Doss chipped in 15, including 1 3-pointer, and Kylen Milton and Reinhart finished with 8 and 6 points respectively.

Solomon Bozeman said that his team has to get better on the boards, especially on offense.

"I think we did a bad job on the glass, and we need to get better with that" Bozeman said. "We had really good defense and our guys did a good job supporting each other."

Doss said he told his team at the half to focus on the defensive end of the game and the offense would take care of itself. For the Lions next game, Doss plans on practicing on handling his turnovers.

"I will be focused on stopping turning over the ball," Doss said. "I'm doing that too much and that's one me."

The Lions take on the Texas Longhorns on Saturday, Dec. 10 at noon at Austin.