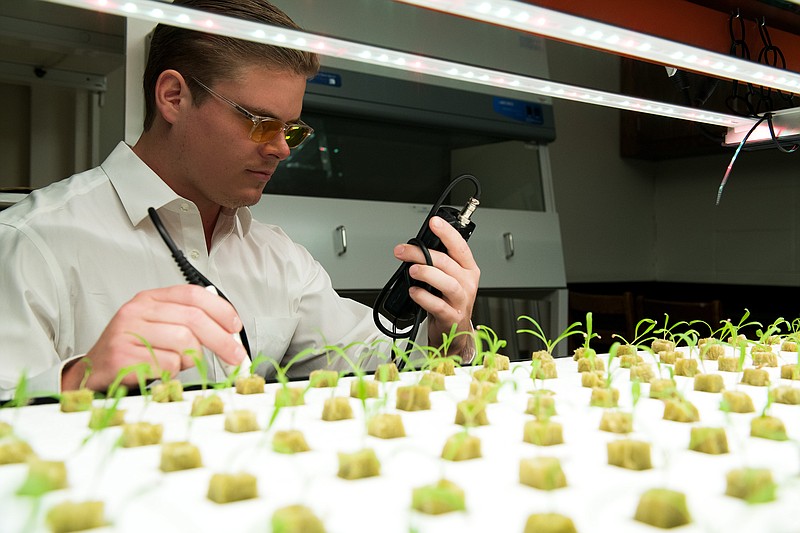 Derek Dean, a graduate student in horticulture, screens spinach germplasm for disease resistance in a vertical farm system. (Special to The Commercial/Fred Miller/University of Arkansas System Division of Agriculture)

Researchers with the Arkansas Agricultural Experiment Station are using a new vertical farming system to find spinach varieties that have resistance to a challenging root disease in hydroponic systems.

The research is in collaboration with Bowery Farming as part of an effort to develop spinach that is resistant to Pythium. Bowery Farming states it is the largest vertical farming company in the United States in terms of retail footprint.

Pythium, a fungus-like pathogen, is one of the main factors limiting the production of spinach in commercial indoor growing operations, according to Ryan Dickson, assistant professor of greenhouse and controlled-environment horticulture for the experiment station.

The experiment station is the research arm of the University of Arkansas System Division of Agriculture, which has a research agreement with Bowery Farming to evaluate spinach varieties for waterborne pathogen resistance.

Vertical farming uses stacked hydroponic systems to increase production with a smaller footprint. A growth cycle for spinach in the system is about 21 days.

"There is less research on Pythium-resistant spinach cultivars in field and conventional hydroponic productions systems, with even less published data on Pythium resistance in vertical farming system," said horticulture graduate student Derek Dean, a collaborator on the experiment station research.

"The difference between a common hydroponics system and a true 'vertical farming system' is a heightened level of control for growers and scientists alike, and that level of control grows every day as we continue to learn more about these systems and continue to develop and integrate more technologies," Dean said.

Fresh produce grown in vertical farms generally travels less miles to reach grocery stores compared to conventional produce, according to "Vertical Farming for the Future," an article released by the U.S. Department of Agriculture in October 2021. Vertical agriculture could help increase food production and expand agricultural operations as the world's population is projected to exceed 9 billion by 2050, the article adds.

Under the bright LED grow lights and humming fans of the vertical hydroponic system provided by Bowery Farming under the agreement, Dean wears yellow-tinted safety glasses to shield his eyes and exposes different varieties of spinach to Pythium in high and low doses. It is part of the calibration process to identify an adequate amount of Pythium to use in the experiment.

The fungal-like oomycetes thrive in moist conditions and infect root tips to create root rot, severely limiting growth or killing the plant. Some species – Pythium aphanidermatum and Pythium dissotocumare – produce a spore that can swim to infect an entire hydroponic system if not caught in time.

Once the system is calibrated, Dean and Dickson will screen multiple varieties of spinach that are commonly used in the industry, as well as up-and-coming varieties. They will also screen unreleased germplasm selections developed by experiment station researchers Ainong Shi, associate professor and vegetable breeder for the department of horticulture, and Haizheng Xiong, program associate in the department of horticulture.

"The first objective is to screen a wide population of commercial and non-commercial varieties and germplasms for Pythium resistance, but we also want to test Pythium complexes with other diseases," Dickson said.

Demand for spinach has increased as many consumers seek healthier diets, and it remains the most popular vegetable in terms of per capita consumption, according to a research paper by James Correll, distinguished professor of plant pathology for the experiment station. Spinach has become a $500 million industry in the United States and the European Union, Correll noted.

John Lovett is with the University of Arkansas System Division of Agriculture.