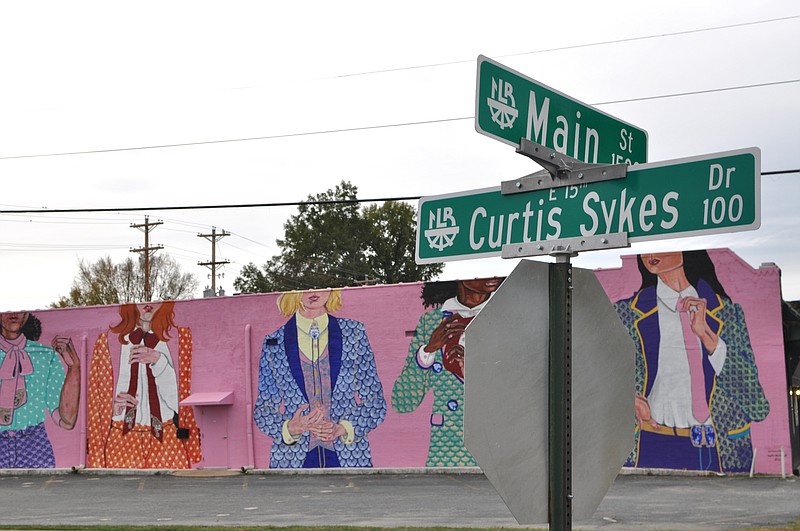 Curtis Sykes Drive, named for a groundbreaking leader who spent much of his life in Dark Hollow, begins at Main Street in North Little Rock and proceeds about three-quarters of a mile east through the neighborhood. (Special to the Democrat-Gazette/Sonny Rhodes)

It's a breezy Friday afternoon in November, getting cooler by the hour. Under a leaden sky, near the apex of where East 13th Street and Curtis Sykes Drive converge in North Little Rock, I take a photograph of a street sign that says, "Welcome to Dark Hollow."

Above me, I hear snow geese and look up to see the birds in a ragged V formation frantically moving south about as fast as their wings will carry them, aided by a steady north tailwind. I will hear geese the rest of the afternoon and well into the night as that cold front brings rain over a good part of the state as well as snow in northern Arkansas.

I have driven through this part of town countless times in the 23 years my family has lived in North Little Rock's Park Hill neighborhood. That's because East 13th, which becomes North Hills Boulevard about a block from where I am standing, is one of the few thoroughfares for anyone wanting to get from downtown to the city's northern neighborhoods. And, while I have been curious about Dark Hollow's history for a long time, well, as with a lot of things, I just never got around to it. I am on a quest now.

First, it might help some readers to know where exactly Dark Hollow is. Encompassing a neighborhood, a warehouse area and what was once a huge swamp, the Hollow is roughly bounded by Union Pacific Railroad yards on the east and south, Main Street on the west, and Interstate 40 on the north.

Ever go to McCain Mall or take Interstate 40 toward Memphis? Well, the northern part of Dark Hollow is all that flat land across the interstate from that enormous First Pentecostal Church over there at the foot of Park Hill.

Now, returning to that neighborhood welcome sign. Across the street is Dark Hollow Memorial Park and a large historical marker. I check them out.

The park features a red brick walkway and a wall with bricks bearing the names of past residents. There's a plaque honoring the memory of residents who "kept this community together through their concern, time and hard work." The plaque further notes that the area "has produced many community leaders including Arkansas' first African-American State Senate Majority Leader, Tracy Steele."

Steele, by the way, is still active in public life, being, among other things, a North Little Rock School Board of Education member.

The large historical marker explains: "African Americans began settling in the Dark Hollow neighborhood of the Iron Mountain Addition in the early 1900s, near the railroad and jobs. Named for an ancient swamp, Dark Hollow developed further after the Arkansas Legislature authorized an improvement district to finance a federal drainage project in 1907. Homes, churches, stores and a school helped define the community of business owners, educators and blue-collar workers who endured floods, fires, economic hardship and neglect."

The sign further explains that the street I just crossed was renamed from East 15th Street to honor the memory of a longtime resident, educator and historian. The Encyclopedia of Arkansas notes that Curtis Sykes was one of the Little Rock School District's first Black principals in the 1960s before the district was fully desegregated and was "a driving force in legislation requiring the teaching of African-American history in Arkansas public schools."

His life was truly an up-by-his-bootstraps story. Curtis Henry Sykes was born Dec. 21, 1930, at the home of his grandparents on Pine Street in Dark Hollow. After graduating from high school in 1947, he enrolled at Little Rock's Dunbar Junior College but dropped out because he could not afford the monthly tuition of $10. After that he took a job at the Lafayette Hotel and joined the Army Reserve.

Called to active duty in the Korean War in 1950, Sykes would recall this development as a blessing in disguise, according to the encyclopedia. He was honorably discharged as a sergeant in 1953 and "qualified for educational benefits, thus beginning a life-long commitment to education."

He went on to earn a bachelor's degree and two master's degrees, one of which came in 1965 from what is now Harding University, becoming the institution's first Black graduate.

He spent 34 years as an educator and administrator, including stints as principal of Booker T. Washington Elementary School in Little Rock and as the first Black principal at Woodruff Elementary. He ended his education career as assistant principal at Gibbs Elementary in 1985.

It adds that he is "perhaps best remembered for his leadership of the Black History Commission of Arkansas," an advisory group to the Arkansas State Archives. From 1993 to 2007, he was the commission's chairperson. "In this role, Sykes pushed for legislation to have African-American history taught in Arkansas public schools under Act 326 of 1997."

He died Sept. 9, 2007, and is buried in the Arkansas State Veterans Cemetery. More about him can be found at arkansasonline.com/1205sykes.

So, now we know for what the community was named and for whom the street was renamed. But how did that ancient swamp get its name?

First, let's address a few fallacies that I have run across in researching old newspapers and sifting through volumes of material provided by the North Little Rock History Commission's Cary Bradburn, whose book "On the Opposite Shore: The Making of North Little Rock" is a fascinating read.

First, the name was not derived from an American Indian term that was translated as "Dark Hollow."

Second, the area was not called that because of a lack of streetlights. Dark streets may very well have been a legitimate complaint over the years, but the bottom line is, the area was known as Dark Hollow well before anyone put down roots there.

With that out of the way, let's sift through some old newspapers.

References to Dark Hollow go at least as far back as the 1890s. These include a mention in the April 5, 1896, Arkansas Gazette in a feature known as "North Side News," a collection of one-sentence folksy reports. April 5 was Easter Sunday, and the reports ranged from church services and baptisms to visits from out-of-town guests. Sandwiched between an item about a church speaker and one about Miss Ida Samples being the guest of a Mrs. Robkins, was this tidbit: "Robert Reed and Walter Young spent yesterday at Dark Hollow fishing."

Nine days later came another mention in the "North Side News" that leaves this reader begging for more: "Some of our young men are enjoying themselves at Dark Hollow this week." (Doing what? Fishin'? Frog giggin'?)

A little over a year later, on Sept. 25, 1897, the Gazette reported a Dark Hollow fire that had been raging for a week or more and had produced smoke that enveloped Little Rock. "It was worse than a London fog and you could almost cut the smoke with a knife. It caused sore eyes without number."

The report went on to say there were no houses or fences nearby and the "only damage entailed is the destruction of timber and the effect the smoke has upon the eyes of those within its spread. For the time being Little Rock, like Pittsburg, is a smoky city and is as clear of mosquitoes as though the thermometer registered zero."

Ten years later, work began on a project that would drain a huge swamp in Dark Hollow. Back when such things were known as land reclamation projects, the project involved making a roughly six-mile ditch from the swamp to the Arkansas River, essentially draining a 3,000-acre wetland -- home to a large body of water known as Loomis Lake, which had provided bountiful hunting and fishing -- and a huge forest of cypress and tupelos.

Sounds logical to me.

I return to Dark Hollow the following Monday. It's colder and darker than it was Friday. I walk next to the big ditch that drained the swamp and continues to carry murky runoff that will soon enter Redwood Tunnel and course beneath East Broadway and other streets into the Arkansas River.

There are no sounds of geese today, only the roar of traffic on North Hills Boulevard and Interstate 40.

Sleet begins falling with a vengeance, stinging my ears and nose. I take shelter under a bridge. I close my eyes and try to imagine Dark Hollow some 130 years ago. For a moment I hear the laughter of young folks hunting and fishing and even catch a whiff of smoke.

Sonny Rhodes is a (mostly) retired journalism professor and avid student of history. He spends a lot of time walking.