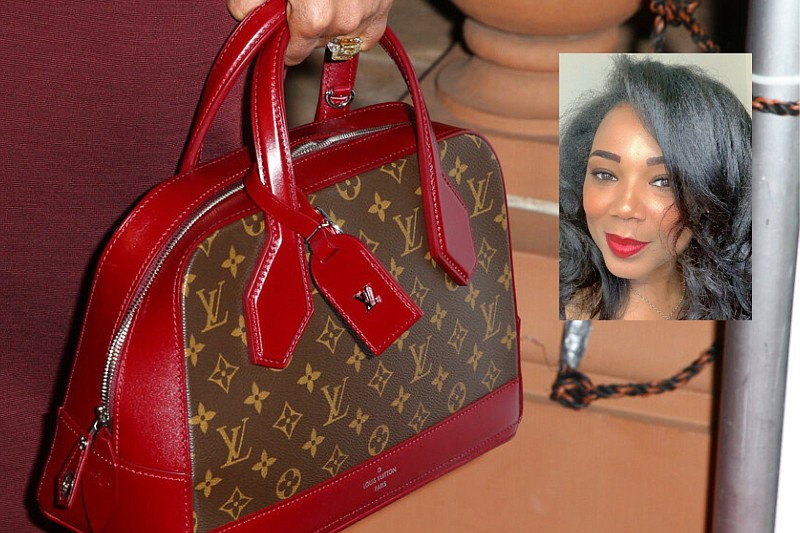 Mary Wicks, (inset), a 2001 graduate of the University of Arkansas at Pine Bluff, is shown with a Louis Vuitton purse carried by Mary J. Blige at the "Freeze Frame" Gala and Architects of Change at The Wallis Annenberg Center for the Performing Arts in Beverly Hills, Calif., on Feb. 4, 2016. Wicks works for Louis Vuitton. (Inset, courtesy photo; main, Rich Fury/Invision/AP)

Mary Wicks, a 2001 graduate of the University of Arkansas at Pine Bluff, wears many hats professionally. She currently works for Louis Vuitton, the French luxury fashion brand, and she also has experience in a number of other fields, including sales, print journalism, live news reporting and film and TV production.

Wicks credits her unique and adventurous career to what she calls her passion for people and networking.

After graduating from UAPB with a degree in mass communications -- journalism, she worked as a reporter for KTBS-TV Channel 3 in Shreveport. Eager to expand her skill set and diversify her career after a year of working as a reporter, she packed up and drove to Los Angeles.

"I didn't have an apartment or job lined up when I made the decision to move to Hollywood," Wicks said. "I stayed in a hotel the first night, but by the next day I found myself an apartment. Thanks to my experience in reporting, I had speaking skills and knew how to present myself. This really came in handy as I started finding jobs and gaining experience in acting and TV/film production."

While building her career in California, she appeared in skits on Jimmy Kimmel Live and starred in films including "Hollywood Chaos," which starred Vanessa Simmons and Tyler Lepley, who acted in Tyler Perry's "The Haves and the Have Nots" on the Oprah Winfrey Network.

Her acting credits also include "The 7th Commandment," an independent film produced by Will Smith and Jada Pinkett Smith. She worked behind the scenes on movie productions in roles such as production coordinator and director's assistant for films including "Season of the Witch" starring Nicolas Cage and "Open Gate" starring Tyler Hoechlin and Agnes Bruckner.

In 2021, she was hired as talent coordinator for Brat TV. In that role, one of her responsibilities was recruiting talent for the Facebook Watch digital show "Something About Larray," starring Larri "Larray" Merritt, a YouTuber and social media influencer.

As her gig with Brat TV started coming to a close, Wicks wondered what her next professional move would be. In a moment of serendipity, she found out about a potential job opportunity as talent acquisition coordinator for Louis Vuitton. She says being offered the job is a testament to the importance of meeting new people and making connections.

"I met my now-manager at a Mexican restaurant in Allen, Texas, a suburb of Dallas, when I was a graduate student," she said. "We started talking, and she gave me her card and asked to stay in touch. I added her to my professional connections on LinkedIn. I stayed in communication -- my expertise -- and after graduation, she posted the position on LinkedIn. I immediately reached out. She called me in for an interview, and here I am."

DIVERSITY AND INCLUSION IN FASHION RETAIL

Wicks said her experience in recruiting talent for the TV studio played a crucial part in getting the job at Vuitton. Based in Dallas, she is responsible for hiring people with a passion for luxury fashion in the southern and central U.S.

As a member of Vuitton's diversity and inclusion department, she is also responsible for helping ensure that everyone at the company has the chance to thrive professionally regardless of race, sex, gender identity or sexual orientation.

"Louis Vuitton wants to change the narrative about who luxury fashion is intended for," she said. "One way to work toward this goal is to hire people from different backgrounds and from different communities of color. This includes hiring African Americans, Hispanic Americans, Asian Americans and people from other national origins. This will show our commitment to not only reaching out to a diverse range of consumers, but also recruiting and retaining talent from diverse backgrounds to work in our stores."

In the past year, Wicks has traveled to historically Black colleges and universities (HBCUs) to interact with students and tout the benefits of a career in fashion retail. She said she made sure to start her HBCU recruitment tour at her alma mater. In September, she participated in UAPB's career fair and plans to return next year.

"My management has been very supportive of my project to recruit talent at HBCUs," she said. "At first, they asked about the practicality of recruiting in Arkansas, a state with no Louis Vuitton retail stores. I explained that UAPB students come from all over the U.S. and that many of them move back to their home states after graduation. Because of their high mobility, UAPB graduates could potentially move to cities such as Chicago, Atlanta or Dallas to pursue lucrative careers with Louis Vuitton."

She also believes UAPB will be a great source of potential talent because of the university's Merchandising, Textiles and Design (MTD) program. The program, offered through the UAPB Department of Human Sciences, teaches students the fundamentals of textiles, apparel design and merchandising/retailing.

Yunru Shen, instructor for the MTD program, said it features a fashion network club, as well as fashion internship opportunities.

"We support our students in writing resumes, building their portfolios and through professional advising to help them advance their fashion careers. The MTD program also provides fashion show and exhibit opportunities to allow students to gain real-world experience in fashion during their time at college."

TIPS TO WORK IN LUXURY FASHION

In her recruiting efforts, Wicks said she is looking for students who are seriously interested in a career in luxury retail.

"We want to hire students with some retail experience, drive, determination and an elevated desire to speak to the brand and, most importantly, to our clients," she said. "The essential skills are communicating well, multi-tasking, being a fast learner and understanding the retail industry."

Wicks recommends that students gain experience in the fashion retail industry before applying for jobs with luxury brands.

"My advice would be to start working at a retail store such as Kendra Scott, Dillard's, Michael Kors, Macy's, JCPenney or a local high-end boutique," she said. "After gaining some experience, start studying and learning all about Louis Vuitton and the Moet Hennessy Louis Vuitton houses. What makes the brand stand out? Read about the history and the culture and think about how this relates to your career path and personality. Then create a LinkedIn account and start networking."

Wicks said current students may be surprised to learn the variety of jobs available in the luxury fashion retail industry. Experienced graduates can work as concierges, client advisers or private client advisers, as well as in operations, visual merchandising, web development, legal affairs, client relations and even security.

"When hired by luxury fashion brands such as Louis Vuitton, most individuals start out as client advisers," she said. "I know one client adviser who earned over $100,000 in commissions alone over the course of a year."

When interviewing for the luxury fashion company of their choice, graduates need to make sure not to make one mistake in particular that could cost them the job -- they should not wear clothes made by competing brands to the interview.

"Imagine someone shows up to an interview for Louis Vuitton decked out in Gucci clothing and accessories," Wicks said. "This is a big no-no, because it shows the candidate doesn't take the brand seriously enough."

Wicks said Louis Vuitton currently only offers paid internships in New York City, but students on summer or winter breaks can be hired seasonally and work in part-time or full-time roles for a few weeks to gain experience in the regional stores.

"Students should keep in mind that we have opportunities all over the country and globally if they are open to mobility," she said.

Wicks credits her decision to attend UAPB to a family legacy of graduates from the university. Her relatives who graduated from Arkansas Agricultural, Mechanical & Normal (AM&N) College (now UAPB), include the late Vertie Lee Carter, a renowned educator who is a member of the UAPB National Alumni Hall of Fame and Arkansas Black Hall of Fame, as well as the late Roy "Doc" Walker, who served as coach in the Texarkana, Ark., school district for 35 years. During his time at AM&N, Walker played football and baseball and later served as athletic trainer and assistant baseball coach.

Wicks said Lorraine Fuller, former UAPB professor of mass communication, convinced her she could achieve great success in the field.

"She stayed on me throughout my studies, and seeing my potential for success, spoke it into me," Wicks said. "This is the true value of pursuing an education at UAPB -- professors see something in you and help you grow."

Will Hehemann is a writer/editor with the UAPB School of Agriculture, Fisheries and Human Sciences.