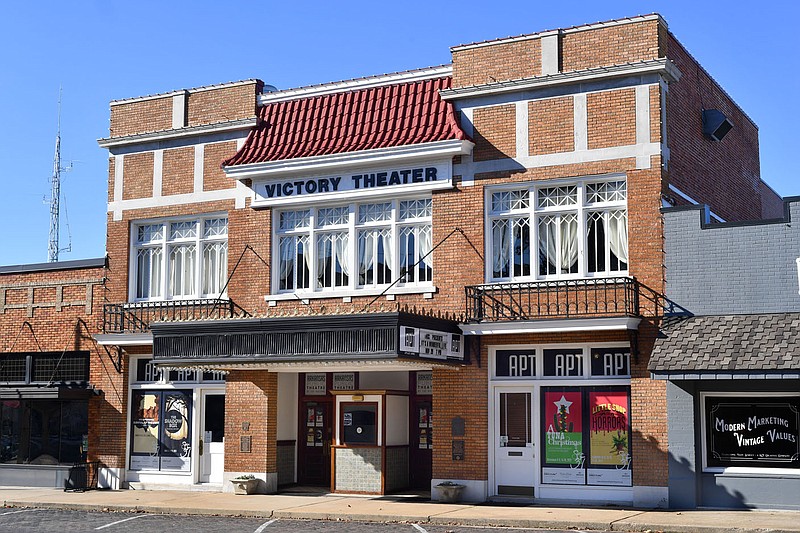 The Victory Theater, home of Arkansas Public Theatre, is seen Monday, Nov. 28, 2022, on Second Street in downtown Rogers. A grant from the Walton Family Foundation will fund renovations to the theater that will more than double its seating capacity. Visit nwaonline.com/221129Daily/ for today's photo gallery. (NWA Democrat-Gazette/Andy Shupe)

ROGERS -- An interior restoration project at Victory Theater will make the downtown venue available for live music and larger crowds.

Seating capacity will increase from just over 200 to nearly 500 seats, transitioning out of the current dinner-theater setting, according to community development director John McCurdy.

An upgraded sound system will make it a better place for concerts, McCurdy said.

"These two improvements together will allow us to bring high-quality music events to downtown Rogers during the colder months, which will build upon our success with Railyard Live," he said.

Railyard Live concerts and related downtown events this year drew an average of 700 people per event and saw revenue from ticket sales from table reservations almost double, he said recently.

Community-based nonprofit group Arkansas Public Theatre and its theatrical experiences will remain a part of the city-owned theater at 116 S. Second St.

The city will continue to look for ways to improve the building as a theatrical venue, according to McCurdy.

"We worked hand-in-hand with APT throughout this process," he said. "Our commitment to APT was memorialized in 2008 and will continue via a space-sharing plan between APT and the city."

"The Arkansas Public Theatre has, and will continue to be, an important part of this ecosystem," Christian said.

At its meeting on Nov. 22, the City Council unanimously approved funding from the Walton Family Foundation and the city's general fund reserve for the Victory Theater project.

The Walton Family Foundation is contributing $710,000 to the restoration.

Design work and additional construction costs will be paid for by $150,000 from the city's general fund reserve.

"The foundation recognizes that Rogers is a safe bet for their investments in regional placemaking," McCurdy said.

The city's partnership with APT and programming at the venue is crucial for the downtown area, council member Betsy Reithemeyer said at the meeting.

The foundation is also contributing $270,000 in grant money for arts and culture programming across the city, matching the $270,000 allocated for that use in the city's recently approved 2023 budget.

A person may eventually be hired to manage Victory Theater and its events, according to McCurdy. The new position will depend on the council approving the use of city money. The Community Development Department plans to present a formal request to the council next summer, he said.

Late next summer is the estimate for starting the interior restoration, which will likely take four months, according to McCurdy.

Victory Theater was designed by Rogers architect A.O. Clarke, according to the Arkansas Public Theatre website.

After its opening in December 1927, the theater was renovated several times as a movie and vaudeville theater before shutting down in the early 1970s, the site states.

The city bought Victory Theater in 2008 and agreed the 95-year-old facility would be Arkansas Public Theatre's permanent home.

Rounds of exterior renovation work were completed on the building in 2013 and 2021, facilities manager David Hook said.