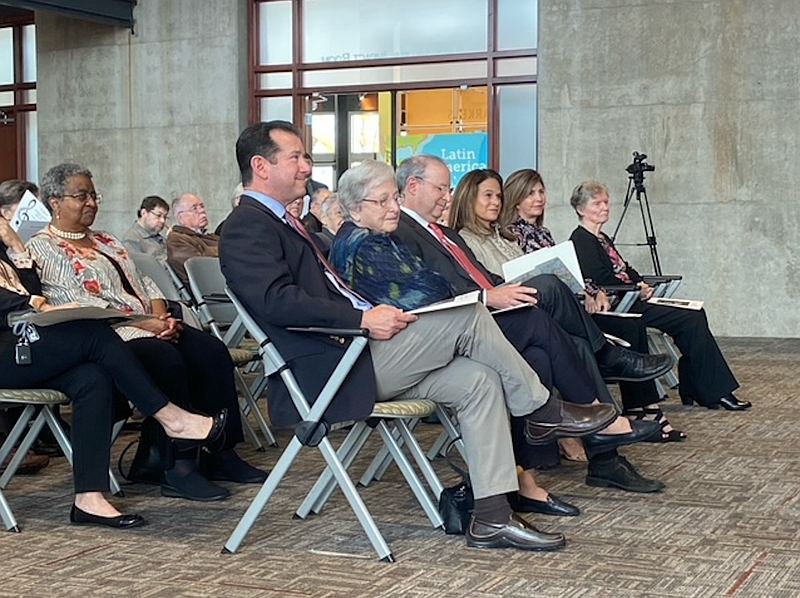 Guests attend an event at Heifer Village on Tuesday, Dec. 6, 2022 celebrating the largest individual contribution ever to the Arkansas Symphony Orchestra by former board chairman Lee Ronnel, who passed away on Jan. 29, 2022. (Arkansas Democrat-Gazette/Colin Murphey)

The name change, announced Tuesday at Heifer International, honors a bequest by Ronnel. He was a longtime supporter of the orchestra and a former ASO board chairman. Ronnel died in January at age 85.

The orchestra — honoring a request in Ronnel’s will – is not divulging the amount of the gift, but is calling it “the largest individual gift in the nonprofit’s 56-year history.”

The orchestra’s previous largest individual donation was a 2018 bequest of $1.8 million from Linda Garner Riggs, a Fordyce native who had served on the Arkansas Symphony board. She had also been director of the Research and Committee staff of the Arkansas Legislature; legislative and budgetary director for Gov. Frank White; and Arkansas Insurance Commissioner. Riggs died in 2017.

Ronnel’s bequest supports the orchestra’s endowment “to support a strong orchestra in Arkansas and ensure future generations of Arkansans have access to quality music education,” according to a news release.

Ronnel, founder and president of Metal Recycling Corp. in Little Rock, was also a professionally trained pianist with a passion for symphony performances. In 2013, he and his wife Dale were the recipients of the Patron of the Arts award from the Governor’s Arts Awards.

He supported the orchestra in various capacities for five decades, including serving as orchestra board president and as a "life" member of the board, the nonprofit said. Ronnel also served as president of the orchestra’s foundation. He led multiple conductor search committees and co-chaired the orchestra’s Opus Ball X fundraiser with Dale in 1994.

"We've had good years and bad years, and through them all, there was Lee Ronnel," said orchestra CEO Christina Littlejohn.

A portion of Ronnel’s legacy gift will fund an endowment supporting operating costs for the orchestra's future Stella Boyle Smith Music Center. The orchestra is in the midst of a capital campaign to build the $9 million education and administration facility between the Clinton Presidential Center and Heifer International in Little Rock’s East Village.

Littlejohn said at the announcement that the orchestra is dedicated to raising the money before breaking ground. The campaign, which opened in January, is still shy by almost $1.9 million, but she said she hopes to have raised the remainder by April and that the facility will open in early 2024.

The academy that will bear Ronnel's name includes music engagement programs — children’s concerts, string instruction and community and youth orchestras — and will have its home in the new music center.

“We had been looking for a way to unify all of these programs under one name,” Littlejohn explained.

What the orchestra had been calling the Sturgis Academy will now be called the String Academy.

Littlejohn called Ronnel’s service to the orchestra “inspirational and transformational,” and noted that Ronnel, who had worked to preserve and strengthen the orchestra for 50 years, had through his bequest “set us up to continue to grow and thrive for the next 50 years.”

“Lee’s support, friendship and commitment to the arts have helped the Arkansas Symphony Orchestra grow and thrive since our earliest days. He truly loved supporting musicians and their work,” said Littlejohn. “He’s honored us all with this opportunity to carry on his mission by ensuring a strong future for ASO’s community and youth orchestra programs and introduce new generations of Arkansans to the transformative power of music."