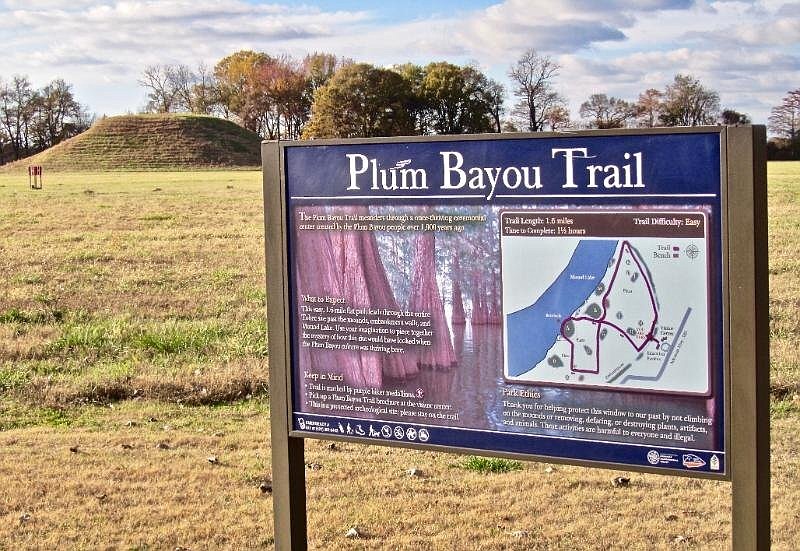 One of the two trails at Plum Bayou Mounds Archeological State Park is described. (Special to the Democrat-Gazette/Marcia Schnedler)

In one of William Shakespeare's indelible lines, Juliet says that "a rose by any other name would smell as sweet."

Now the Arkansas Department of Parks, Heritage & Tourism has decided that the name for one of the state's most important prehistoric sites would sound even sweeter if changed to accurately reflect its long-ago roots.

Until last month, the long-standing misnomer was Toltec Mounds Archeological State Park, erroneously bestowed in the 19th century. That vanished Toltec culture prospered about 1,000 years ago in Mexico, some 1,300 miles south of here. But knowledge of Mexican prehistory was hazy at best in 19th-century Arkansas.

Newly blessed with a proper name, Plum Bayou will host an annual event this month that its prehistoric people are believed to have marked. The Winter Solstice Celebration, 3:30-6:30 p.m. on Dec. 17, is scheduled for that weekend date four days before the actual shortest daylight of the year.

Visitors on Dec. 17 are invited to "walk into the past with us to discover what archaeologists have uncovered about the people who lived here over 1,000 years ago. The story of the Plum Bayou people will be revealed, including why sunsets were so important to their culture."

After the sunset is viewed over the tallest of the site's earthen structures, visitors will be invited to the picnic area to warm up at a fire with hot cocoa, cider, s'mores, and American Indian storytelling.

Meanwhile, the park's name change is still a work in progress. Except for that big new sign, most of the posted information still refers to "Toltec Mounds." As a park ranger explained during a recent visit, it will take a good deal of time to change all the posted information inside and outdoors, as well as reprint the brochures and other material. 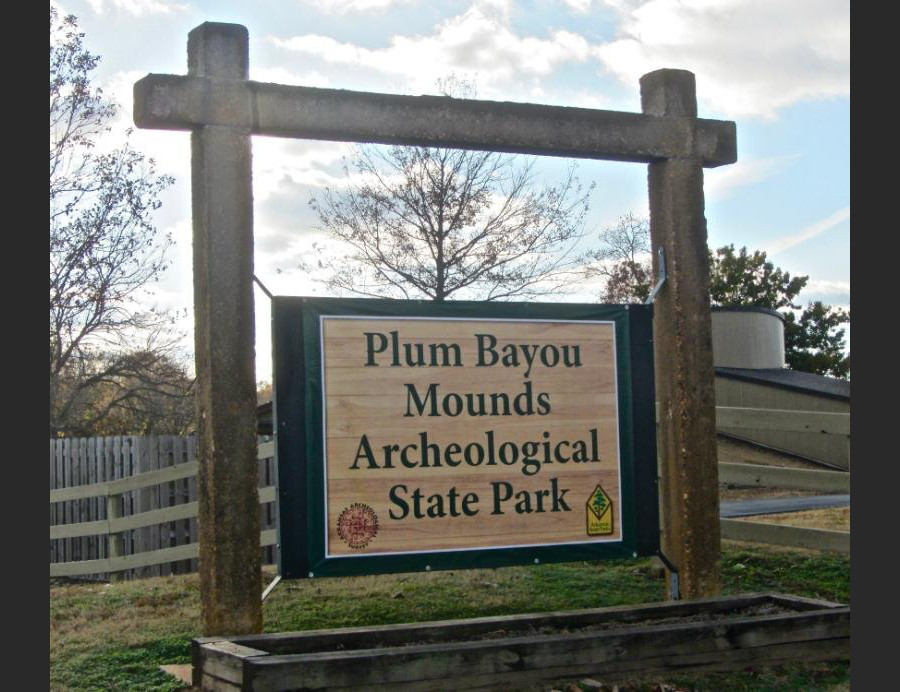 A new sign tells visitors that the site is now Plum Bayou Mounds Archeological State Park. (Special to the Democrat-Gazette/Marcia Schnedler)  "I don't think the people in charge realized what a huge task that is," he added.

Input received from Arkansans at a forum last spring was a factor in the name-change decision. Opinions were collected from other parties, including the Arkansas Archeological Survey, which manages the site along with the Arkansas Department of Parks, Heritage & Tourism.

In announcing the name change on Nov. 2, Arkansas Archeological Survey's Paige Ford said, "We have always known the name Toltec to be a misnomer. It's a fact that the park's staff makes well known to visitors."

The site was occupied from about A.D. 650 to 1050 as a religious and social center for people living in the region. The culture was illiterate, so only physical evidence remains. There originally were 18 mounds, built near the oxbow lake now called Mound Lake. Farming during the 19th and early 20th century destroyed all but three of them.

A free brochure at the visitor center maps the park's two main paths, with numbered markers along the way describing site features. Walking either the Plum Bayou Trail or the Knapp Trail gives a close-up look at the layout.

The brochure reports that "archaeologists believe only about 50 people lived within the boundaries of this site. They were probably the religious and civic leaders of the Plum Bayou people. The general population, it is believed, lived in scattered villages and farmsteads in the surrounding area." It's likely that only several times a year would ordinary citizens have been admitted "for special ceremonies and to renew social and family ties."

The tallest of the three remaining structures, labeled Mound A and rising to 49 feet, is flat on top. It likely would have served as a platform for a temple or house. Mound B, 39 feet high, probably had a similar function.

The third, Mound C, is much lower and rounded on top. Archaeologists decided decades ago that it is a burial site, making it off-limits for digging under a 1991 state law that bans any disturbing of American Indian graves.