Health center will be first building shared by the state educational institutions by Neal Earley | December 7, 2022 at 4:20 a.m. 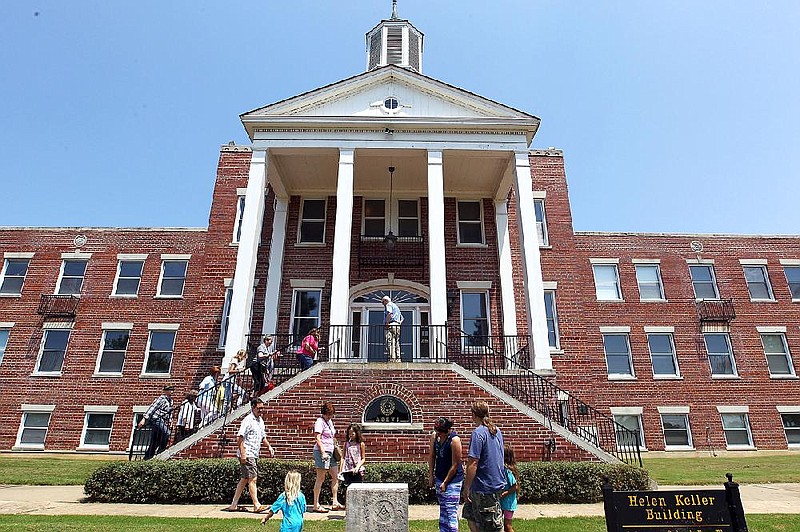 Arkansas Democrat-Gazette/BENJAMIN KRAIN -- 8/5/2016-- People tour the Helen Keller Memorial Building at the Arkansas School for the Blind and Visually Impaired during an Arkansas Historic Preservation Program's monthly Sandwiching in History tour on Friday. Internationally-known blind educator Helen Keller delivered a speech at the 1939 dedication ceremony of the Colonial Revival-style building.

Arkansas schools for blind and deaf students broke ground on a $4 million health center Tuesday that will serve as the first facility shared by both schools.

The health center will be built with design elements for blind and deaf students, the first on either campus to accommodate both types of students.

"This building is the first -- I think in the history of either school -- that is designed for deafblind children," said Janet Dickinson, superintendent for the Arkansas School for the Deaf. "A building that is designed for both is a gift to both the deaf students and the blind students."

The planned center is part of $6 million in funds allocated for infrastructure upgrades for the schools, with $2 million set aside for replacements to water lines and the power grid.

Gov. Asa Hutchinson, who announced in February he would set aside dollars for the schools from the 2020 CARES Act, a federal covid-19 stimulus package, said Tuesday during the ceremony that the project was the first on the campus in decades.

"I'm delighted this will be the first major construction project since the 1970s. It's actually very embarrassing that it's been that long," the Republican governor said.

The health center will host the school's nurse and provide services for mental health, audiology and ophthalmology/optometry. The center will be unique in having accommodations for blind, visually impaired and deaf students.

"It's designed to meet their needs where a regular building might not be," said Alosha Cerney, an architectural technician with Cromwell Architects Engineers, the Little Rock firm for the health center. "So this is specifically designed with them in mind."

Terry Watson, an architect with Cromwell, said the center is likely to open before Christmas 2023.

The 9,560-square-foot building will feature wide hallways to give room for people to walk and communicate through sign language, and dimmable LED lights to reduce glare, tactile surfaces and wallpaper with Braille for people who are blind or visually impaired.

It also will have larger conference rooms and counseling spaces, which make it easier for groups of deaf students and staff to form circles to face one another, and rounded corners to prevent hallway collisions.

Dickinson, superintendent of the Arkansas School for the Deaf, said through an American Sign Language interpreter the groundbreaking was a ceremonial beginning of the post-pandemic future for the schools.

Dickinson spoke about the challenges the school faced during the pandemic, including closings, when many of the students, who live in dorms on the campus, headed to their homes across the state. Dickinson thanked Hutchinson and Arkansas Secretary of Education Johnny Key for their leadership through the pandemic as well as school staff, such as the nurse and mental health professional who guided students through it.