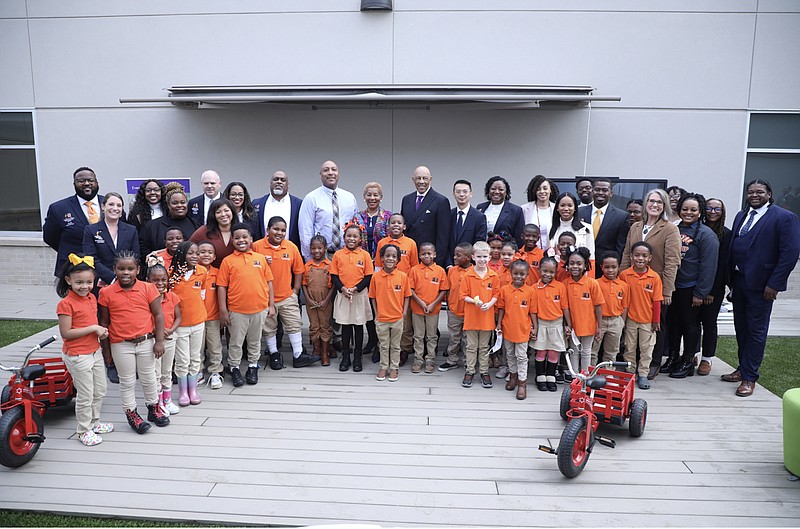 Students, faculty and administrators of Friendship Aspire Academy Downtown Campus gather for a group photo during its grand opening Tuesday. The school officially welcomed students Monday. (Special to The Commercial)

"This school represents an urban partnership with the city, a partnership with the downtown library, arts center and aquatic center," said Joe Harris, CEO of the Friendship Education Foundation, an organization behind the Friendship charter schools in Arkansas. "These are resources intended to be used by our children and families. We really created a community resource school."

The new campus at 700 S. Main St. held its grand opening Tuesday, one day after 160 kindergartners and first graders moved into the school along with their teachers and other staff members. Pine Bluff Mayor Shirley Washington was on hand for the ceremony.

The growth of Friendship's elementary campus on South Hazel Street, along with a desire to connect with newly built downtown structures including the new Pine Bluff/Jefferson County Main Library, led school officials to construct the new school, which will add a grade level each school year beginning with second grade in the 2023-24 school year.

Students in kindergarten and first grades who have siblings also attending Friendship attend the Hazel campus along with second through fourth graders for efficiency in transportation, elementary Principal Jherrithan Dukes said. Fifth graders, who are currently attending the Friendship Southeast campus on 73rd Avenue, will remain there for sixth grade next school year, while fifth grade will be taught again at Hazel.

Open house for the downtown campus was held last Thursday as the Pine Bluff Christmas Parade on Main Street wound down. With 16 core classrooms installed in a 27,500-square-foot, single-story school, Friendship Downtown was completed on time and on budget, Harris said.

"We delivered on our promise to have our kids in there by the first part of the year," he said.

As part of its community-oriented theme, citizens are welcome to use the campus for after-hours meetings, as well as other Friendship campuses, Harris said.

A "learning courtyard" is also installed with artificial turf to make the school sustainable and environmentally friendly.

"Everything about the school is focused on education and exploration," Harris said. "This school teaches not only about being a good neighbor but accommodating the needs of kids in an academically rich environment that is also state-of-the-art."

Friendship Downtown will focus on teaching kids to develop a love for reading and giving them solid foundations in reading, writing and math, Harris added. The second floor of the Main Library will serve as an additional classroom for the school.

"Kids will learn to write in cursive because some of the most significant U.S. documents are written in cursive," he said. "We're also ensuring that every child is not only able to read but develop a love for reading. The library will be an extension of our classroom."

The joy on the faces of children over a new environment has not easily withered away, by the account of their principal.

"We're looking forward to that school being a great learning opportunity and a great learning space for families in the area, and kids carrying out great friendships and having a world-class learning experience," Dukes said. "We're excited about the school, and staff and students will transform our network and the city of Pine Bluff."

The unveiling of Friendship Downtown came as the 73rd Avenue Southeast campus is undergoing renovation to be converted into a middle and high school. Friendship Southeast is phasing out its current high school with the May 2023 graduation of the senior class, which began with the former Southeast Arkansas Preparatory School.

Friendship's elementary and middle schools also won a "Beating the Odds" award from the University of Arkansas Office for Education Policy, which honors schools where at least 66% of students face economic challenges and students are demonstrating the highest levels of academic growth. The Hazel campus won a similar award last year. 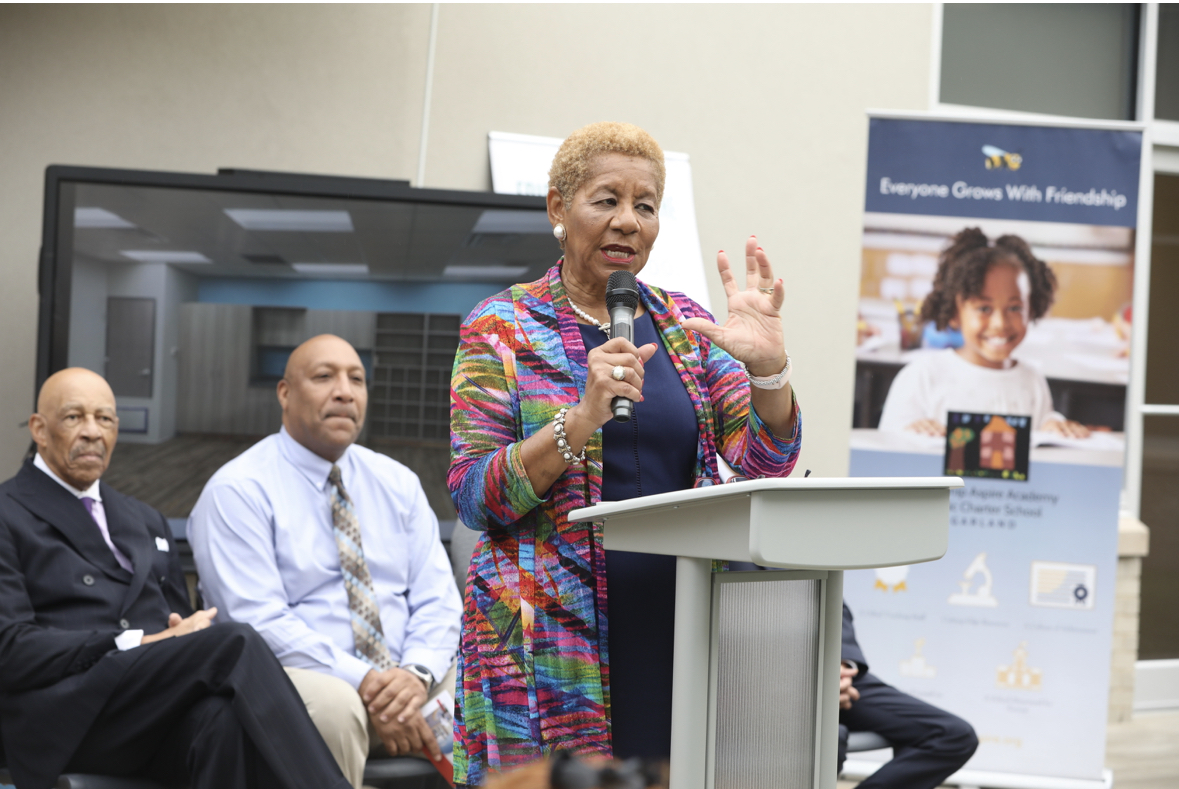 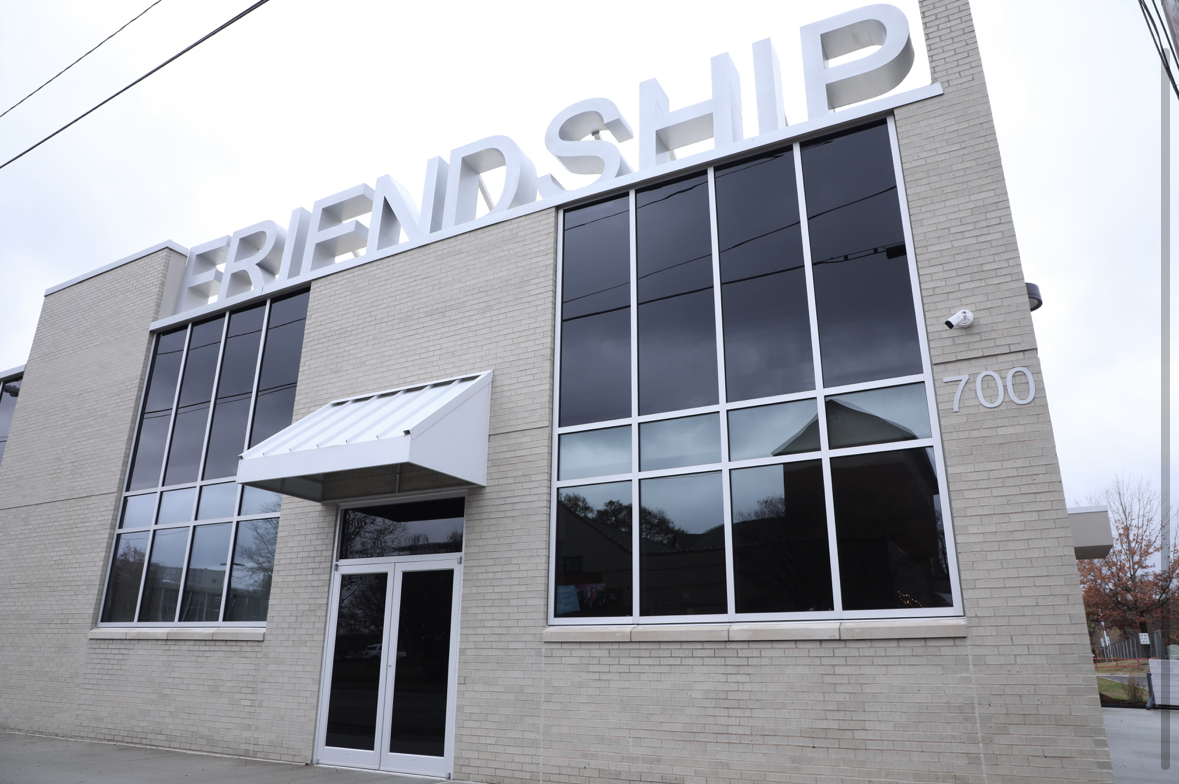