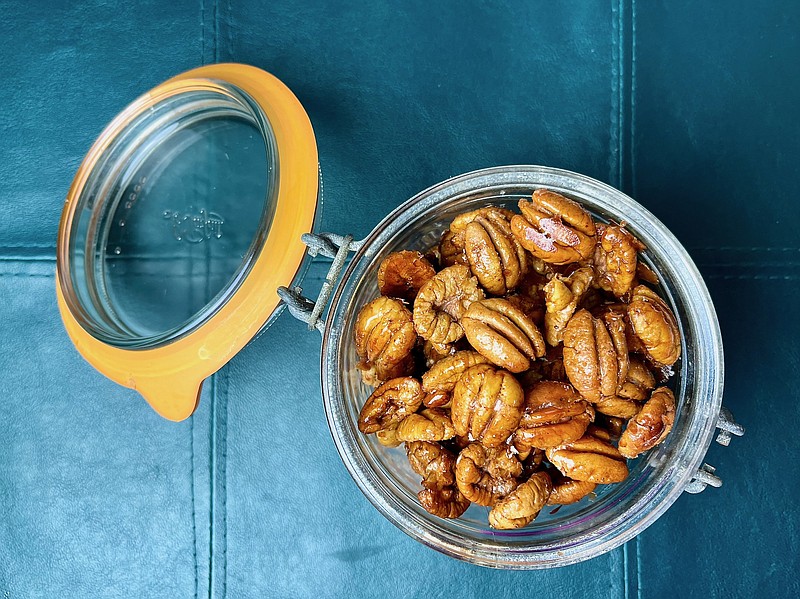 Right up there with the cookies, the cheese balls, the eggnog, the peppermint bark and the fudge, nuts are our favorite holiday snack food.

And by nuts, we mean all the nuts — the true nuts, the drupes and the legumes — whether they grow on trees, shrubs or underground.

We're not botanists and we're not allergists. We're cooks and for culinary purposes almost any seed that has some meat and crunch to it is a nut: almonds, pistachios, cashews, peanuts, walnuts, hazelnuts, pecans, Brazil nuts, macadamia nuts, even pumpkin seeds.

And as good as they are straight out of their shells, nuts are even better when toasted with spices and other flavorings.

We recommend buying ready-to-use nuts — as in pay the extra money and let someone else do the work of shelling and picking out the bitter bits. It's worth it. First, it'll save you lots of time. Second, it's nearly impossible to get perfect halves of walnuts and pecans when shelling your own nuts.

Most recipes call for cups, but nuts are usually sold by the pound. Shelled means the nuts have been removed from their hard outer layers. If you need or simply want to shell your own, here's a handy guide.

Brazil nuts: You're on your own. See intro to Spiced Mixed Nuts for an explanation why.

Pistachios: 1 cup pistachios weighs 5 ounces. You'll need about half a pound of in-shell pistachios for 1 cup nuts. (We feel sorry for your fingertips already.)

Walnuts: 1 cup walnut halves and pieces weighs about 3.5 ounces. It takes just over half a pound of in-shell walnuts to get 1 cup nut meat.

We could not stop eating these sweet and spicy candied pecans. They're delicious on their own, but also excellent tossed in a spinach salad or scattered on a cheese board.

In a medium bowl, stir together the confectioners' sugar, 2 ½ teaspoons water, salt and cayenne. Add the pecans. Stir well so that the pecans are coated with the mixture. The sugar mixture will be thick, but it should be thin enough to coat the nuts. If necessary, add ½ teaspoon more water. Spread the nuts on the baking sheet.

Bake, stirring once or twice, until the pecans are golden brown and shiny, 10 to 12 minutes. Cool on the baking sheet, breaking up any clusters as they cool.

Once cool, store in an airtight container until ready to serve. 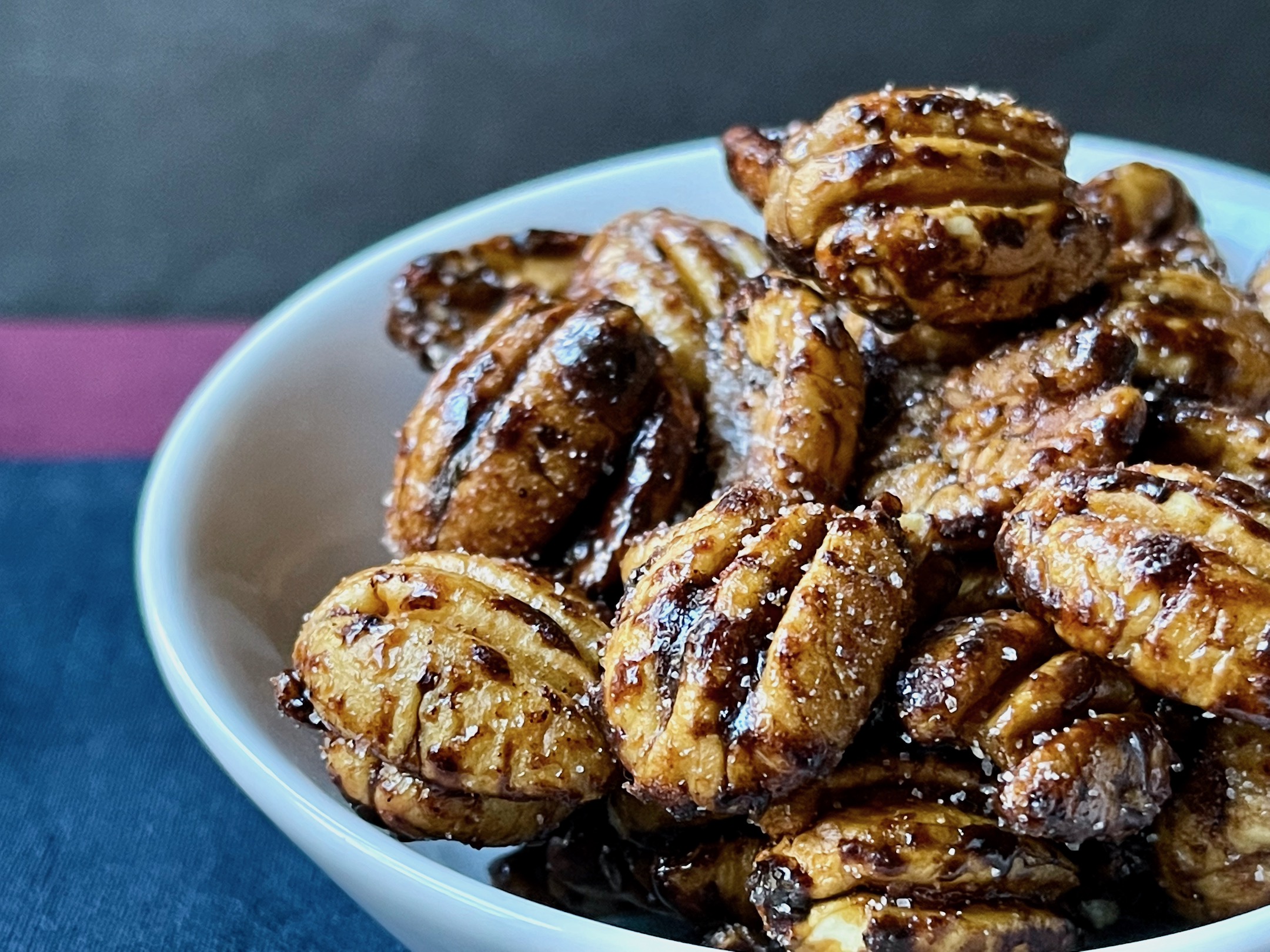 In a mixing bowl, combine the bourbon, brown sugar, cinnamon, granulated sugar, salt and butter. Add the pecans and stir to coat.

Place the pecans in a large skillet over medium-high heat; cook, stirring, until fragrant and caramelized, 5 to 8 minutes. Toss with cinnamon sugar (we used a tablespoon or two). Transfer the nuts to a parchment-lined baking sheet and bake for 30 minutes.

Cool on the baking sheet, breaking up any clusters as they cool.

Recipe from "The Living Table: Recipes and Devotions for Everyday Get-Togethers" by Abby Turner 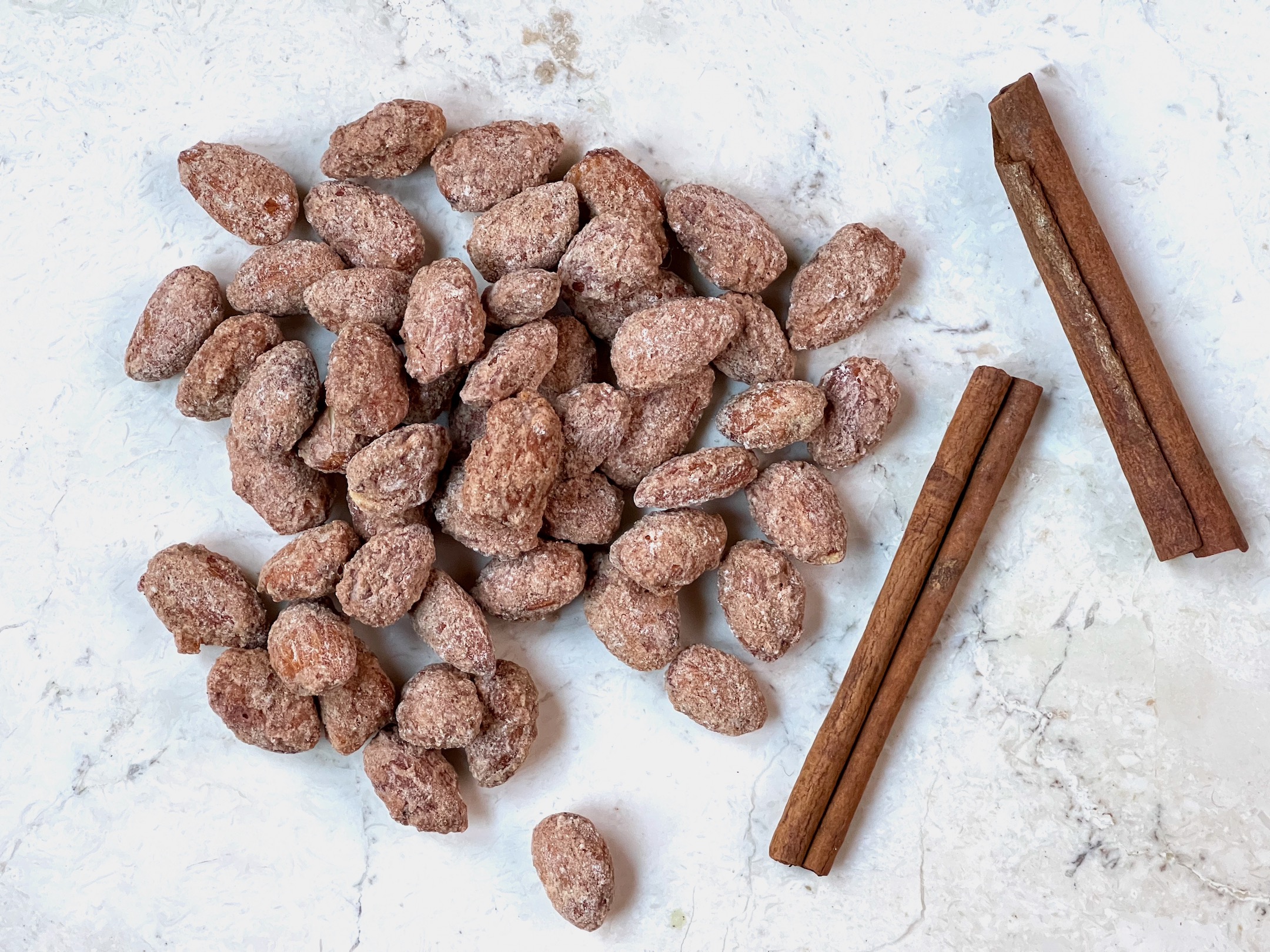 In a large heavy saucepan, combine the ¾ cup sugar, 1/3 cup water, the cinnamon and the salt. Bring mixture to a boil, stirring, over medium heat. Once mixture boils, stir in the almonds. Cook, stirring constantly. The sugar-water will become syrupy thick and as the water evaporates the sugar will turn dry and crusty, this takes a while, just keep stirring. Once the water evaporates, reduce the heat to medium-low and continue stirring until the sugar melts, turning to caramel, and the almonds become shiny. This will also take a while depending on your stove and the pan you use. Once the sugar has melted completely, carefully stir the vanilla extract and remaining sugar. The almonds may pop and crack. This is normal. Adjust the heat as necessary to keep the sugar and almonds from burning, stirring until the almonds are fairly shiny, but crusted with sugar.

Spread the almonds on the prepared cookie sheet. Let cool slightly. When they are cool enough to handle, but still warm, break almonds apart with your fingers or two forks. Serve immediately or cool completely and transfer to an airtight container. If the almonds are not crunchy after cooling completely, place the baking sheet in a 350-degree oven for about 5 minutes.

Variation | Cocoa Chile Toasted Almonds: Reduce the cinnamon to ¾ teaspoon and add ¼ to ½ teaspoon ground red (cayenne) pepper. Omit the vanilla. Mix 2 tablespoons unsweetened cocoa powder with the 1/3 cup granulated sugar before stirring it in at the end. 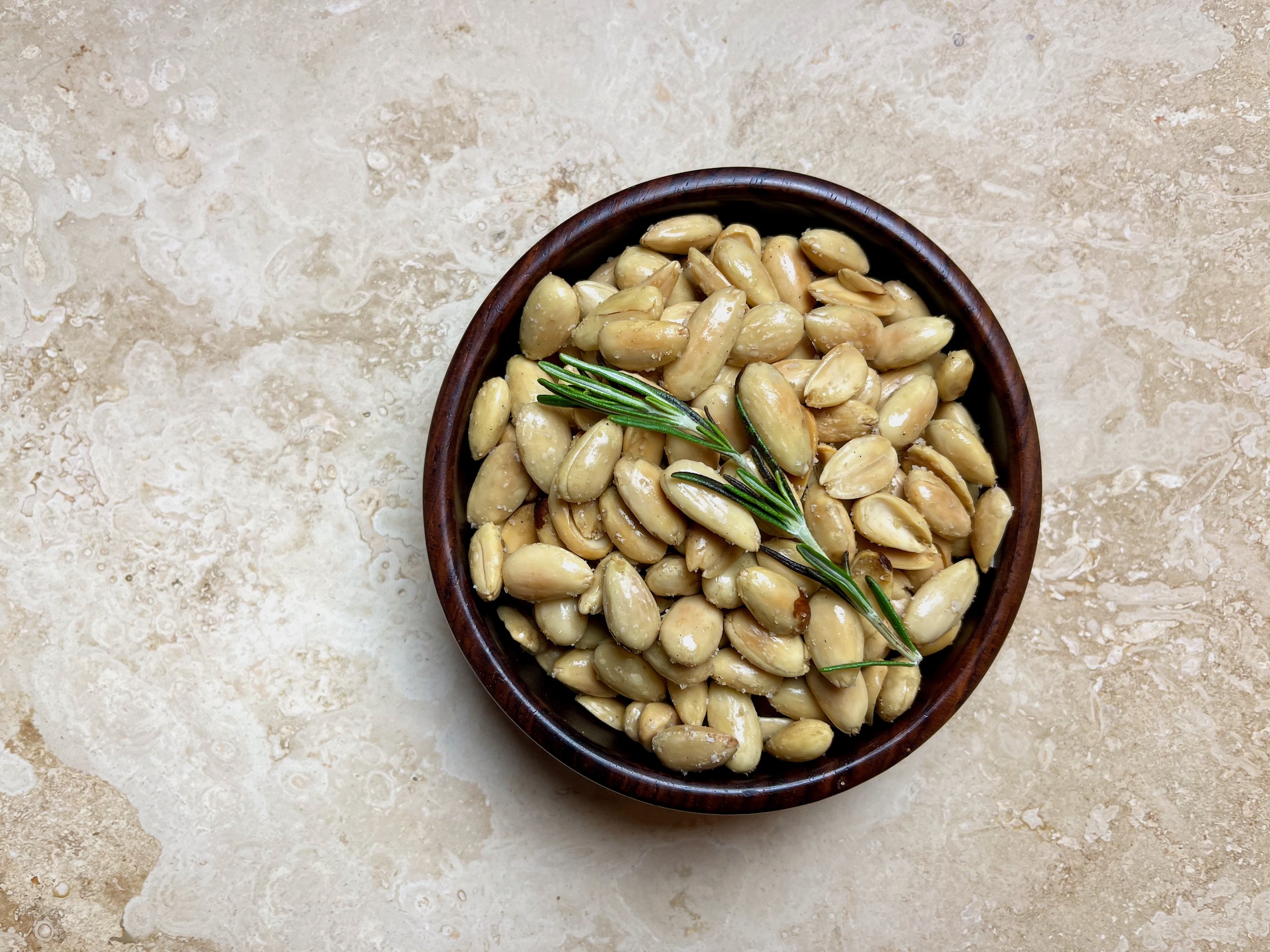 Spanish-Style Almonds (Arkansas Democrat-Gazette/Kelly Brant)  We used a wide cast-iron skillet for the stovetop portion of this recipe and then transferred the almonds to a sheet pan and crisped them in the oven.

Place the almonds in a large bowl, cover with lukewarm water and allow to stand for 1 hour.

Drain and spread the almonds in a single, even layer on a clean tea towel or paper towel and leave to air-dry for about 20 minutes.

In a large wide pan over medium-high heat, combine the olive oil, rosemary and garlic. Add the almonds and stir to coat. Cook, stirring almost constantly to ensure the almonds toast evenly. Once the almonds start to turn golden, add the butter, swirl the pan to coat and continue to cook for 2 minutes.

Remove the pan from the heat, stir in the salt, then briefly drain the almond mixture on paper towels. Transfer to a serving bowl and serve immediately while the almonds are still warm. If the almonds are not crunchy enough for your liking, spread them out on a rimmed baking sheet and bake for 10 to 12 minute at 325 degrees.

Note: If you only have almonds with their skins on, blanch and soak them at the same time. Place the almonds in a large bowl and add boiling-hot water to cover. Let stand 45 minutes. Drain, slip off the skins, rinse and then proceed to spreading the almonds out to dry. 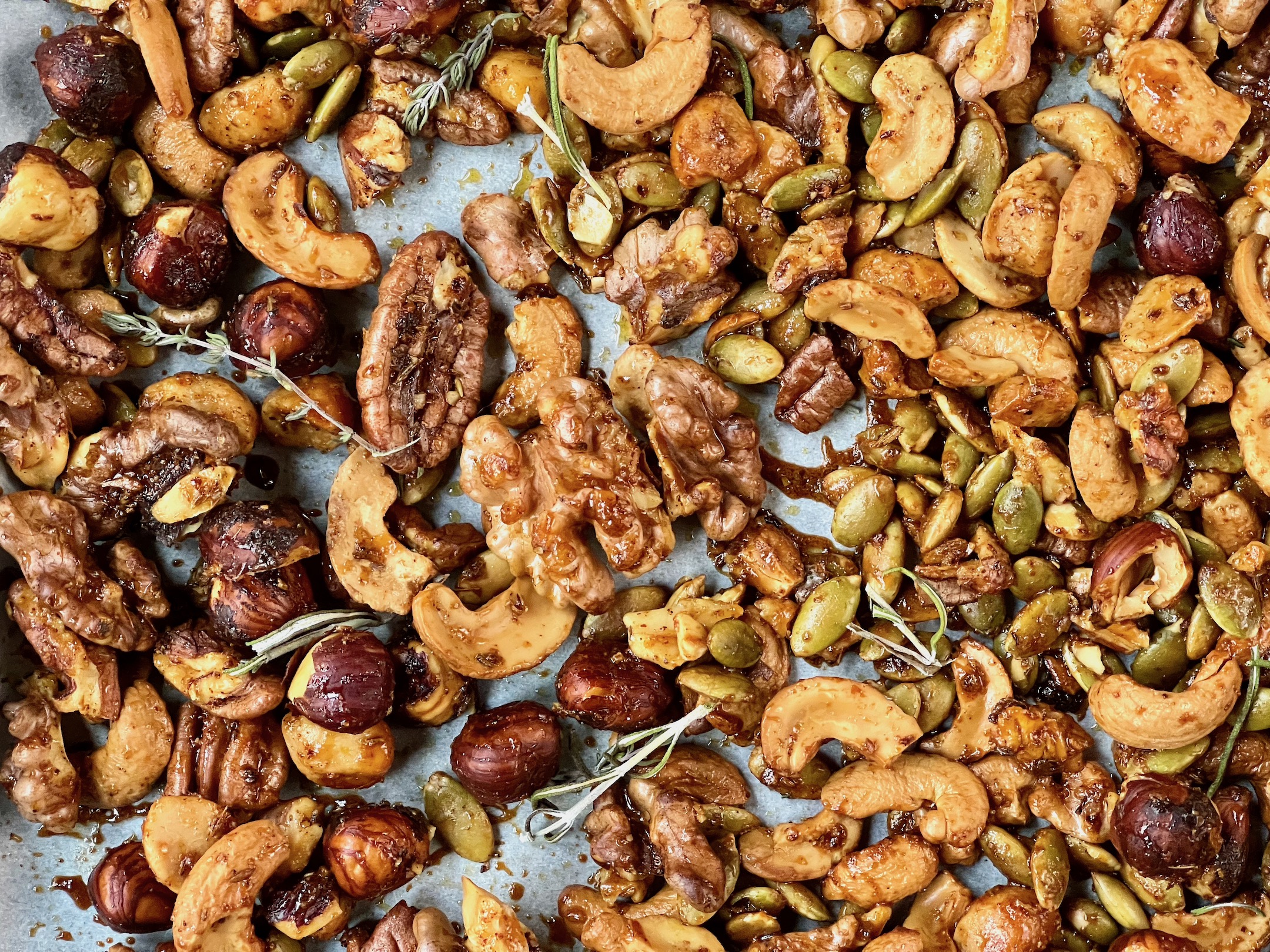 Spiced Mixed Nuts (Arkansas Democrat-Gazette/Kelly Brant)  We played around with the combination of nuts in this recipe from "Christmas at the Palace, A Cookbook" by Carolyn Robb. Robb's version calls for pecans, cashews, Brazil nuts, macadamia nuts and pumpkin seeds. We were unable to find any shelled Brazil nuts and when we tried shelling them ourselves we were dreadfully unsuccessful, obliterating every nut we tried to crack. We used walnuts instead and added some hazelnuts for good measure. We also couldn't make up our minds between rosemary or thyme, so we used both.

Heat oven to 325 degrees. Line a baking sheet with parchment paper or a nonstick baking mat.

In a large bowl, combine the maple syrup, walnut oil, paprika, chile flakes, cumin and salt. Add the nuts and seeds and stir or toss until thoroughly coated with maple mixture.

Spread nuts out onto the prepared baking sheet in an even layer. Add thyme or rosemary sprigs, if using, scattering them around the pan. Bake for 20 to 25 minutes, stirring every 5 minutes, or until glaze has dried and the nuts are toasted and forming clumps. Cool completely, leaving the nuts in little clumps, if desired. Nuts will keep in an airtight container for several weeks, if they last that long.

Recipe adapted from "Christmas at the Palace, A Cookbook" by Carolyn Robb 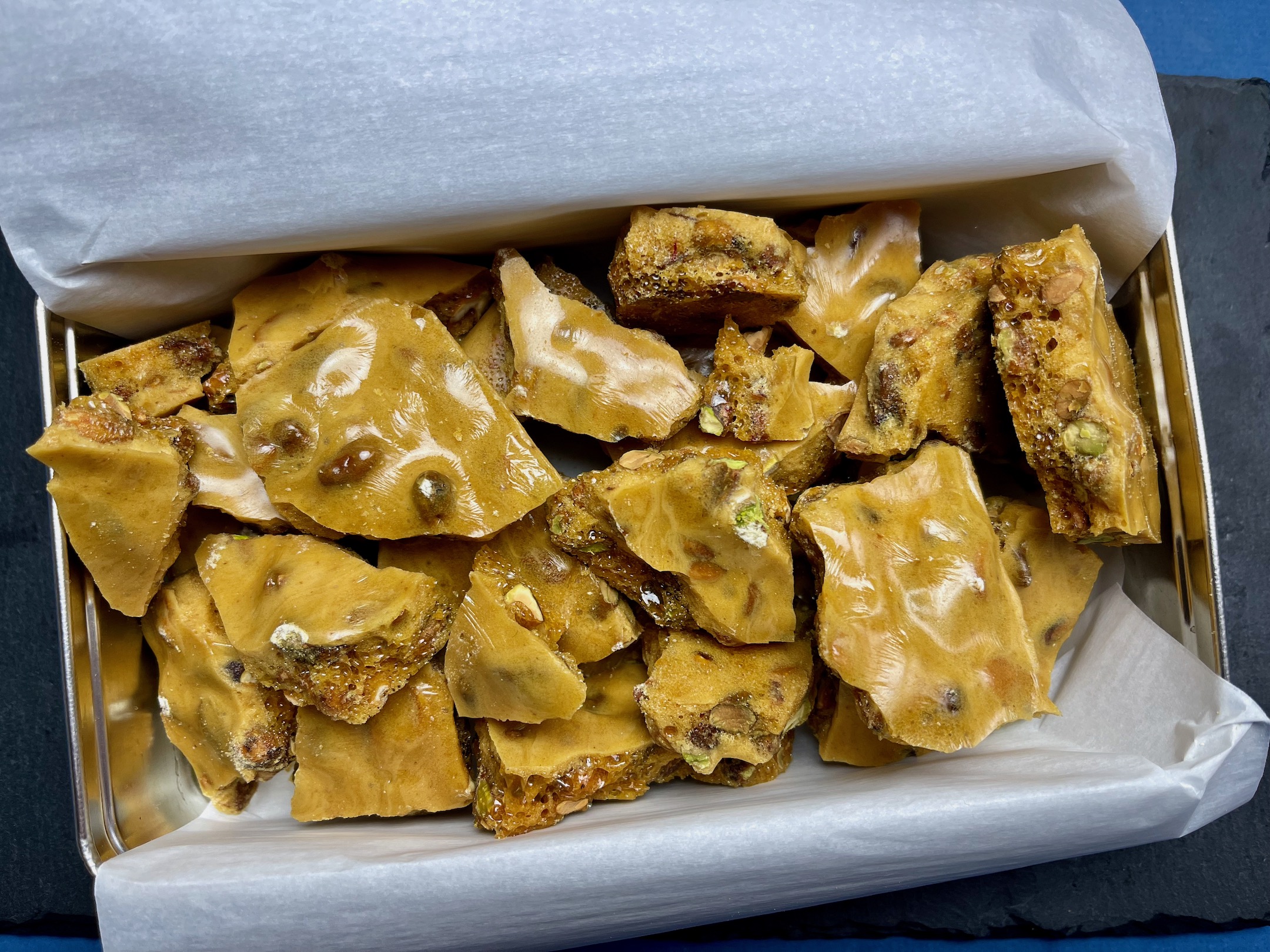 Saffron-Rose Pistachio Brittle (Arkansas Democrat-Gazette/Kelly Brant)  We can't write about holiday nuts without mentioning brittle. The following recipe works for a variety of nuts — pistachios, cashews, peanuts. We especially liked it with pistachios, saffron and rosewater.

Heat oven to 250 degrees. Generously grease 2 rimmed baking sheets with butter and place them in the oven.

In a small bowl, stir together the baking soda, vanilla and 1 teaspoon water.

In a large, heavy saucepan or Dutch oven set over medium heat, combine the sugar, corn syrup and 1 cup water, stirring until the sugar dissolves and the mixture is no longer cloudy. Continue cooking, without stirring, until the mixture reaches 240 degrees. Stir in the 3 tablespoons butter and the nuts; cook, stirring constantly, until the mixture thickens and reaches 300 degrees. Keep the mixture moving and keep an eye on the heat to prevent scorching. When the mixture reaches 300 degrees, remove it from heat and immediately carefully stir in the baking soda mixture. It will bubble up! Remove the baking sheets from the oven. Working quickly, carefully pour half of the hot candy onto each warm baking sheet, spreading it to an even thickness. (This is easier if you have a helper. One person to tilt the pan and one person to scrape the mixture out.) Set aside to cool for about 1 hour before breaking into pieces and storing in an airtight container.

Variations | Saffron-Rose Pistachio Brittle, add generous pinch saffron threads to the sugar and corn syrup mixture. Add a few drops rosewater extract (such as Nielsen Massey) along with the vanilla. If desired, immediately after pouring, sprinkle the brittle with dried rose petals.

Recipe adapted from recipes from "Baking for Every Season" from Williams Sonoma and MarthaStewart.com