Some Ford dealers opt to e-certify 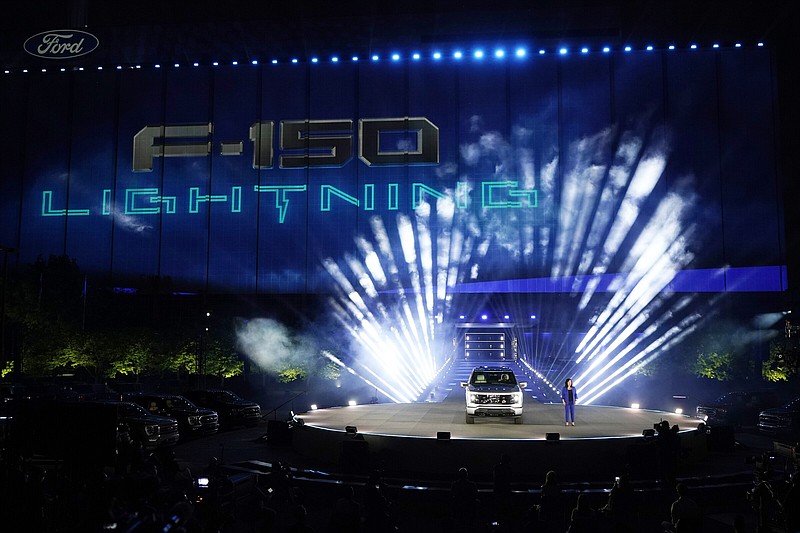 FILE - Ford's Chief Executive Engineer Linda Zhang unveils the Ford F-150 Lightning, Wednesday, May 19, 2021, in Dearborn, Mich. United Rental said Tuesday, May 10, it has a deal to buy 500 of Ford’s F-150 Lightning electric trucks and 30 of its E-Transit electric vans. United Rental expects 120 of the trucks and all 30 of the vans to be delivered and deployed this year as part of its goal to reduce its fleet’s greenhouse gas emissions. (AP Photo/Carlos Osorio, File )

DETROIT -- Roughly two-thirds of Ford Motor Co.'s dealer network in the United States has opted to participate in a new -- and, to some, contentious -- certification program governing how dealers handle electric vehicle sales.

Of those enrolled, the vast majority -- 1,659 dealers -- opted into the highest level, "certified elite," which gives them full sales and service capabilities, and requires a higher investment level. Another 261 dealers opted to become "certified" with full service capability, a cap on how many EVs they can sell and a lower investment requirement.

Ford has about 3,000 dealers in its franchised dealer network in the U.S. The company will give those that didn't enroll another opportunity in 2025, for a second wave that starts in 2027.

Farley said executives didn't have a specific enrollment number they were aiming for but wanted to ensure Model e dealers were adequately spread out to serve customers who are new to the brand.

Ford executives unveiled the standards in September at the company's annual dealer meeting in Las Vegas.

Some dealers and trade groups have pushed back on the standards. They've expressed concerns about the amount of spending required for EV charging infrastructure, questioned how they'll recoup their investments and argued that some of the program's provisions run afoul of state franchise laws.

Generally, those laws require legacy automakers to sell vehicles via dealers and give dealers authority to set pricing.

State dealer associations in a number of states have pushed back on Ford's EV standards. And Ford now is facing legal challenges over the program, Automotive News first reported. Those challenges include a lawsuit filed on behalf of four dealers in New York, an attorney for the plaintiffs confirmed to The Detroit News.

The program also has attracted the attention of a federal lawmaker. U.S. Sen. Richard Blumenthal, a Connecticut Democrat, wrote to Farley last week, urging him to extend the program's enrollment deadline and raising concerns about what he described as its "costly" requirements, according to a news release.

In his letter to Farley, Blumenthal argued that implementing the program as planned would be "antithetical to consumers' interests."

"It is unreasonable to expect that all dealers, in just a few months, are able to commit to hundreds of thousands of dollars in investments that could take years to see the returns of," he wrote. "Fewer Ford Model e dealers lessens competition and consumer choice. Consumers should not be punished for Ford imposing on its dealers tight deadlines requiring high-cost investments."

Ford closed the enrollment window Friday after previously postponing the deadline from Oct. 31. Farley on Monday acknowledged the concerns and said Ford will make changes if needed, but said he feels the automaker didn't make any major mistakes in how it developed and rolled out the program.

"We're big boys and girls. If we get something wrong, we'll make an adjustment," he said. "We don't think we have anything wrong yet. But it's going to be a long journey."

The program aligns with an internal restructuring Ford announced earlier this year that reorganized the company around three business units: Ford Blue, the legacy combustion engine business; Ford Model e, the EV and software business; and Ford Pro, the commercial vehicle business. The standards apply to dealers that want to sell vehicles under Ford Model e.

Dealers were not required to opt into the standards. Some of the pushback around the way the program is structured centers on those dealers not being allowed to sell Ford's EVs through 2026.

Certified dealers are required to invest about $500,000, primarily to install one public-facing fast charger at their store. They would have a limited EV allocation and would not have EVs in stock, but rather would be restricted to build-to-order sales for "loyal" customers.

Certified elite dealers, meanwhile, are required to invest up to $1.2 million and install two on-site fast chargers. They'd have demo units on site, "access to rapid replenishment from Ford," according to a Ford presentation on the program and would be represented on the automaker's website -- with nonnegotiable pricing.

Ford executives have said publicly that they view the company's dealer network as a competitive advantage, given its scale and the opportunities around service business that it brings. But they've also said that changes to Ford's sales model are needed.

With the Model e standards, they aim to deliver efficiencies driven by changes such as e-commerce and digital opportunities, reducing ground stock and "evolving" dealer margins.

The program also has requirements around training dealership employees, and providing new physical and digital services for customers. And Ford is requiring certified elite dealers to maintain pricing consistency and sell EVs for the initial asking price.