Wife to receive Hot Springs veteran’s medal; he was among last of Merrill's Marauders 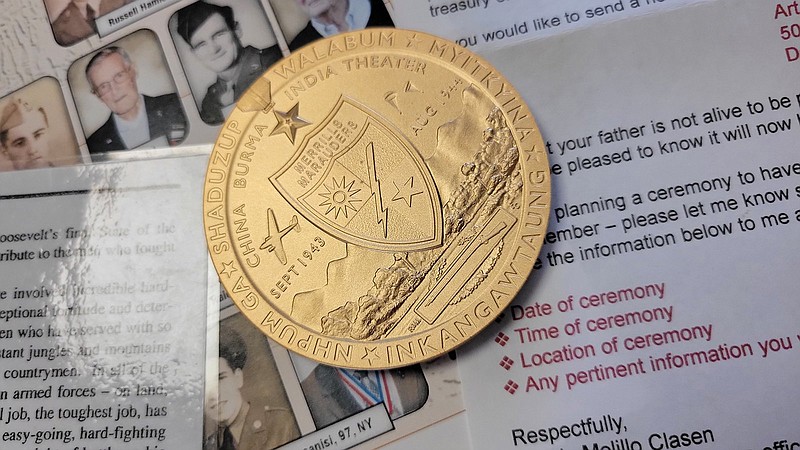 Members and families of Merrill's Marauders were given the opportunity to purchase a bronze casting of the Congressional medal honoring the soldiers. - Photo by Lance Brownfield of The Sentinel-Record

HOT SPRINGS -- Sua sponte is Latin for "of one's own accord," or "voluntarily." It's also the motto of the 5307th Composite Unit, also known as Unit Galahad or Merrill's Marauders.

Merrill's Marauders was a special operations unit of the U.S. Army during World War II, considered a precursor to the Army's elite 75th Ranger Regiment. The Marauders fought in the China-Burma-India Theater, known as the Forgotten Theater. Made up of 3,000 volunteers when formed in 1943, the unit had been reduced to about one-tenth its size by the end of the war.

Fewer than 10 Marauders are known to be alive today.

Fred Randle, a Hot Springs native and member of the Marauders, was awarded a Congressional Gold Medal for his efforts in combat by a bill that was signed into law in 2020. Randle was recognized after it had been confirmed by Merrill's Marauder spokesman Bob Passanisi that he was still alive.

Sadly, Randle passed away the same year, on Nov. 23, at the age of 97 before a special bronze striking of the medal could be presented to him.

Now, the medal will be presented to his widow, Glendal, and to Randle, posthumously, at the Arkansas State Veterans Cemetery in North Little Rock for his 100th birthday on Sunday.

Randle served in the 3rd Battalion, Khaki Combat Team, and recounted his service in his book, "Hell on Land, Disaster at Sea -- the story of Merrill's Marauders and the sinking of the Rhona."

According to a news release by Passanisi, Randle was on the deck of Her Majesty's Hospital Ship Karoa in the Mediterranean Sea when he witnessed a historic event. Her Majesty's Transport Rhona was struck by the world's first guided missile.

After training at Fort Meade, Md., he was loaded onto a merchant ship called the Booker T. Washington. Eighteen days later, he reached the Strait of Gibraltar -- the mouth of the Mediterranean Sea. While en route to India via the Suez Canal, the ship next to him was struck with the missile. His ship continued at speed, leaving the men in the water. Landing in Bombay, India, he took a train to Calcutta, according to a short autobiography by Randle.

Seeing the horrors of famine across the country, he'd heard about a secret volunteer group being formed called Galahad, later known as Merrill's Marauders.

He and his best friend joined with the promise that as soon as the mission was over, they would be sent back to the United States.

Randle was born in the Oakside Community near Mountain View, Mo., in 1922. He and Glendal, to whom he was married for 72 years, raised six children before moving to Hot Springs in 1988 for retirement. He was a big proponent of Veterans Affairs and often shared his experience with other soldiers he met.

The same year he moved to Hot Springs, Randle discovered an organization of Merrill's Marauders survivors. He joined "The China, Burma, India, Banks of Arkansas," and started going to reunions every year.

"I'm telling you, he never let up," his son, Harold Randle, said. "He talked to everybody about these Merrill's Marauders. He just knew there was going to be something about it and sure enough, they were recognized with this Congressional Medal of Honor."

"There's something to them," he said. "He told me so many times in my life that sometimes I just would shrug it off."

Although the regiment was never officially recognized as a Ranger Infantry Battalion, their accomplishments and feats certainly have earned their place in U.S. military history as one of the most impressive forces in all of World War II. Known for navigating the toughest terrain and for being the first U.S. ground force to engage with the enemy in Asia, the Marauders were invaluable in making headway into the continent.

"I'm so glad it worked out the way it was," Harold Randle said. "Because about half the time, people would tell you, 'Oh, that's not interesting,' or, 'That's too much,' but he just pursued."

Two medals were struck thanks to the bill, honoring another World War II unit alongside the Merrill's Marauders. At the time when the bill was signed, each of the nine Marauders was given the opportunity to purchase a bronze striking of the medal.

Randle's family purchased one of the medals, which will be presented to him posthumously on Sunday. The ceremony is set for 3 p.m. 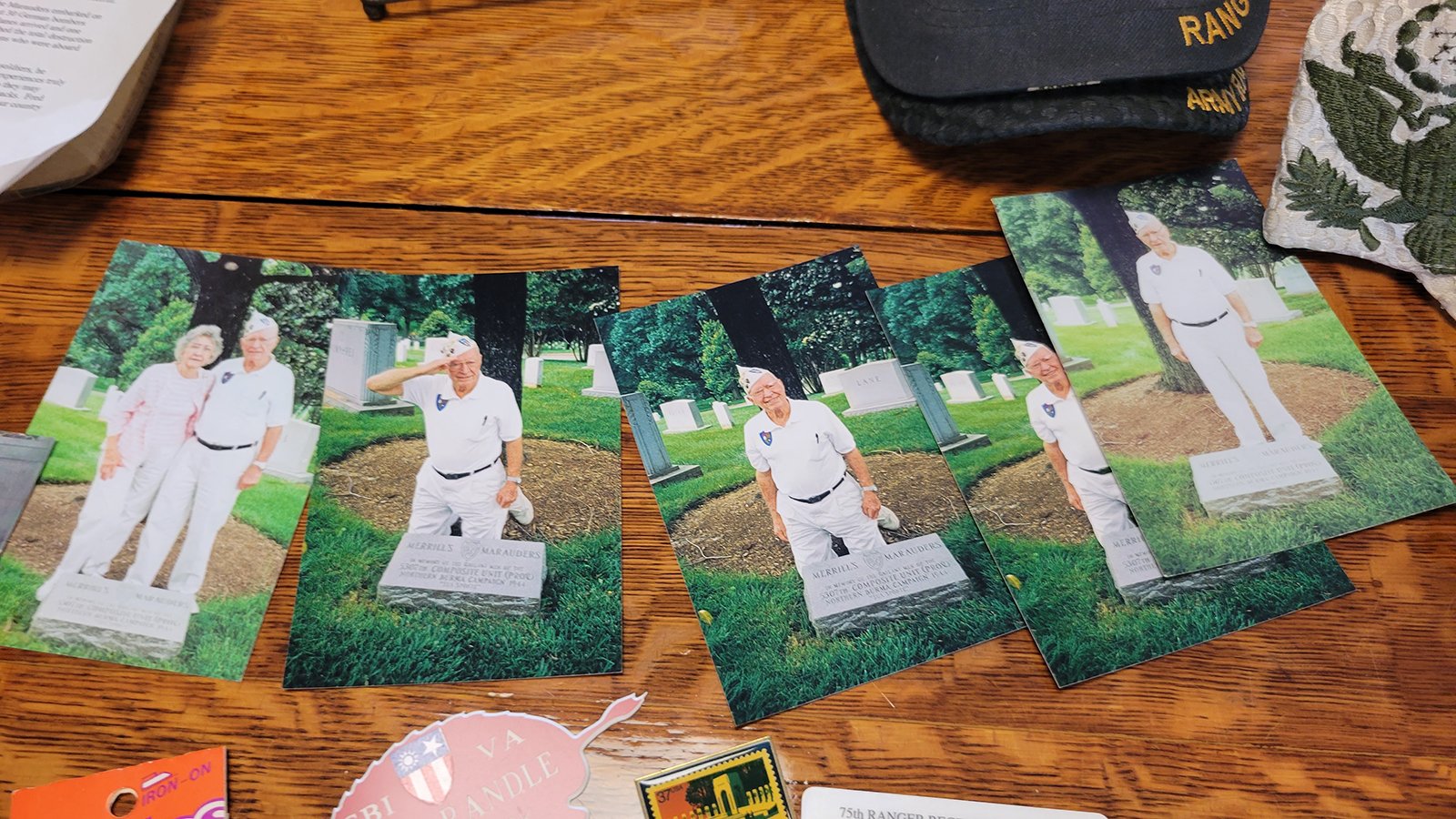 Fred Randle is shown with a Merrill’s Marauders marker in several photographs at the Arlington National Cemetery along with his wife, Glendal. - Photo by Lance Brownfield of The Sentinel-Record