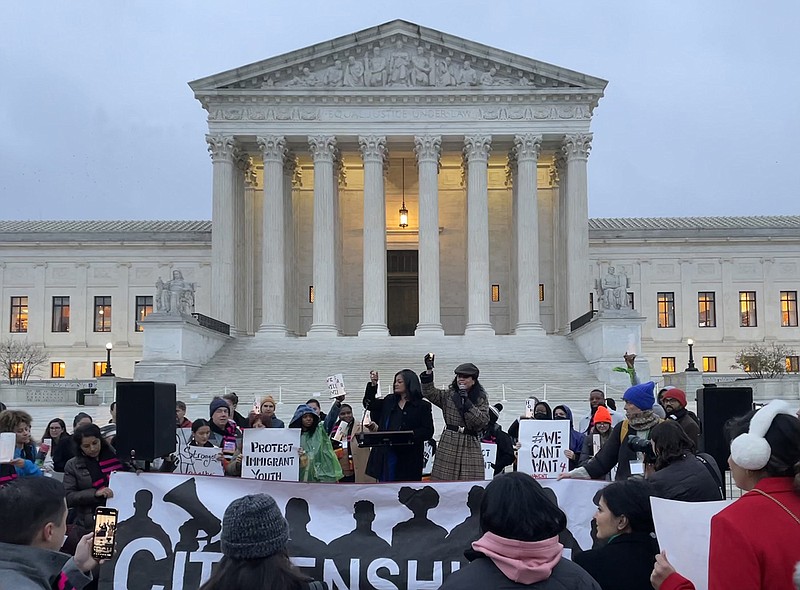 That feeling stems from reports earlier this week regarding a draft framework that would open a pathway to citizenship for 2 million people brought to the country illegally as children. Sens. Thom Tillis, R-N.C., and Krysten Sinema, D-Ariz., have not released any text on the framework, but it would be another bipartisan milestone for legislators who helped the Senate pass gun legislation and marriage protections this year.

Reith, the founding executive director of the immigration advocacy group Arkansas United and co-chair of the Fair Immigration Reform Movement, was in Washington, D.C., for a conference when she saw the first reports regarding the draft.

"We had an emergency meeting on Monday. They were like, 'Did everyone see that? All right, we got to change strategies,'" she told the Arkansas Democrat-Gazette on Wednesday.

Reith, of Fayetteville, helped organize a rally on the steps of the U.S. Supreme Court building Tuesday, during which multiple people spoke of the impact of Deferred Action for Childhood Arrivals protections.

Reith also reached out to a fellow Arkansan: U.S. Sen. John Boozman, R-Ark. She met with the senator's staff Wednesday with plans for another meeting next week.

"I felt that if anyone could help us navigate in this moment, it was going to be him," she said.

The Obama administration created DACA in June 2012 after Congress failed to approve legislation granting temporary residency to people who entered the country illegally as children. The program provides these individuals with renewable protection from deportation and the ability to secure work permits.

Advocates stressed the importance of Congress addressing immigration with an emphasis on Senate action. Senators have yet to take action on House of Representatives immigration measures that the chamber passed in early 2021.

"The problem has been in the Senate, and that is no longer acceptable," U.S. Rep. Pramila Jayapal, D-Wash., told around 50 attendees of Tuesday's rally.

As first reported by The Washington Post, the draft agreement includes a pathway to citizenship for around 2 million people, including 11,000 individuals living in Arkansas according to Reith. The plan will increase funding for border security and extend Title 42 -- a Trump administration policy limiting entries into the United States amid the coronavirus pandemic -- amid work on new immigration processing facilities.

The report of the draft came with lawmakers entering the final weeks of its session. Legislators are focused on addressing the looming threat of a government shutdown and the annual defense measure before the new Congress takes power next month.

Democrats will maintain control of the Senate in the new year with the advantage of a 51-49 majority following Georgia Sen. Raphael Warnock's victory in Tuesday's runoff election. Republicans will gain control of the House with a 221-seat majority.

"Adding something at this late stage would be challenging, and as a stand-alone bill, they felt there probably wasn't enough time for this Congress," Reith said regarding her meeting with Boozman's staff. "What we really leaned into with our message is the urgency."

Legal questions about DACA linger nearly a decade after its enactment. U.S. District Judge Andrew Hanen -- who declared the program illegal in July 2021 -- ordered a continuation of DACA in October amid his ongoing review. Current participants can renew their status, but the program cannot accept new applicants. The U.S. Supreme Court could consider the matter depending on the preceding decisions.

"Not only is it bad policy to let the Supreme Court make the decision, but because everyone's aware we are talking about a timeframe in the near future, DACA-mented are getting negatively affected now," she said.

In a statement, Boozman, of Rogers, acknowledged the need to address immigration, mentioning "our porous southern border and dysfunctional asylum process" as concerns.

"That's where any solution to this problem has to begin and, once implemented, be verified," he continued. "Rushing legislation through a lame-duck Congress with little to no input from the majority of senators or committees of jurisdiction is a non-starter."

"Any immigration deal must secure the border first," he said Wednesday in a statement to the Arkansas Democrat-Gazette. "Trading border security tomorrow for amnesty today has always failed to solve the border crisis and only encourages more illegal immigration."

Reith is reaching out to other lawmakers besides Boozman about meetings next week. She noted that DACA-impacted individuals will participate in those discussions.

"They're not just kids," she said. "These are professionals, they're family, they're fathers, they're mothers, and they play really important roles in our communities."