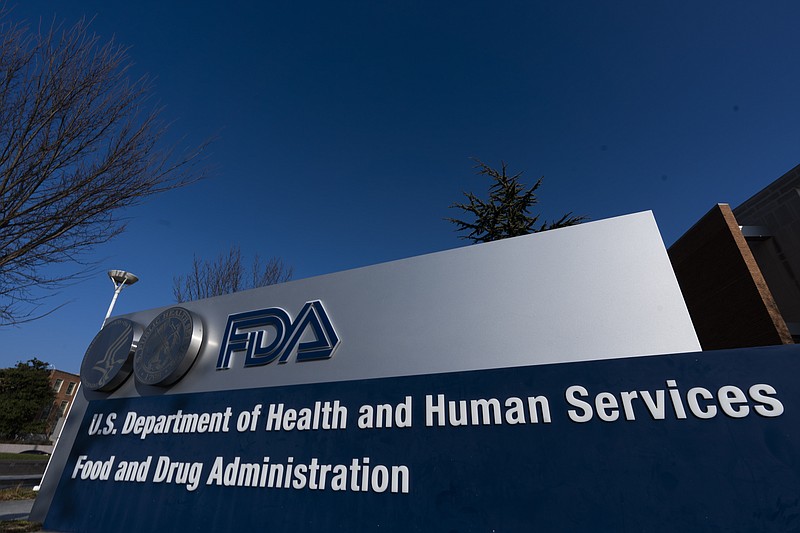 FILE - A sign in front of the Food and Drug Administration building is seen on Dec. 10, 2020, in Silver Spring, Md. Expedited drug approvals slowed in 2022, as the FDA's controversial accelerated pathway came under new scrutiny from Congress, government watchdogs and some of the agency’s own leaders. With less than a month remaining in the year, the agency’s drug center has granted 10 accelerated approvals — fewer than the tally in each of the last five years, when use of the program reached all-time highs. (AP Photo/Manuel Balce Ceneta, File)

WASHINGTON -- Expedited drug approvals slowed this year as the Food and Drug Administration's contentious accelerated pathway came under new scrutiny from Congress, government watchdogs and some of the agency's own leaders.

With less than a month remaining in the year, the FDA's drug center has granted 10 accelerated approvals -- fewer than in each of the past five years, when use of the program reached all-time highs.

The program allows drugs to launch in the United States based on promising early results, before they are proven to benefit patients.

Academics have long complained that the practice has resulted in a glut of expensive, unproven medications, particularly for cancer. But last year's accelerated approval of a much-debated Alzheimer's drug touched off a new round of criticism, including investigations of FDA decision-making by federal inspectors and Congress.

A recent FDA hearing aimed at revoking approval for an unproven preterm birth drug further underscored the program's shortcomings. The FDA has been trying to get the drug, Makena, off the market for more than two years because a follow-up study showed it didn't benefit infants or mothers. The manufacturer has refused to cooperate.

Amid the latest controversy, FDA leaders have taken unprecedented steps suggesting a tougher stance on accelerated approval, nudging drugmakers to remove a growing list of unproven uses for drugs and asking Congress for new powers to expedite removals when companies balk.

Reshma Ramachandran, a Yale University researcher who supports congressional reforms, believes the recent scrutiny of the accelerated approval process "definitely led to them pausing and taking a different path." Still, Ramachandran and other critics say it's too early to tell if the FDA's recent actions reflect a longer-term policy shift.

An FDA spokeswoman said the agency's posture on accelerated approval "has remained consistent, and the agency is committed to ensuring the integrity of the program." She added that the FDA is using "every authority at our disposal" to make sure drugmakers quickly conduct confirmatory studies after approval.

Launched in 1992, the accelerated approval program is credited with speeding the availability of early breakthroughs for HIV and cancer. About 300 drug approvals have been made that way, nearly half of them in the past five years.

But researchers and government watchdogs have chronicled problems with FDA oversight, including delays in quickly removing drugs with failed or missing confirmatory studies. Federal inspectors recently found that 40% of accelerated approvals had incomplete confirmation studies.

The picture is beginning to change. In less than two years, the FDA has successfully called on drugmakers to remove more than 20 approvals from accelerated drugs -- mainly cancer therapies -- that failed to show a benefit. That's more than half of the withdrawals in the program's history.

The ability to require drugmakers to have studies underway before approval is one part of legislation that congressional lawmakers hope to attach to an end-of-the-year spending bill. If passed, it would be the most significant overhaul in accelerated approval's 30-year history.

"We need more teeth in terms of getting the confirmatory trials started before accelerated approval," FDA Commissioner Robert Califf said at a recent cancer conference. "Once approval occurs it's very difficult to hold back the marketeers."

FDA regulators are already testing the approach. Increasingly, the agency is telling drugmakers they must have confirmation studies underway before approval.

"We know the FDA has raised the bar for accelerated approval, and so that's why we're seeking additional clarity on their position," Mike Sherman, CEO of startup Chimerix, told investors on a recent call discussing the company's plans for a coming cancer drug.

A higher bar is expected to spell trouble for smaller drugmakers, which often rely on accelerated approval to gain a market foothold before raising additional funds.

To be sure, FDA approval trends are affected by a variety of forces. The agency's overall tally of novel drugs is down this year to about 30, compared with 50 last year. And even the recent peak in use of the accelerated pathway -- 45 approvals in 2020 -- reflected several trends.

Drugmakers have been aggressively pursuing a new class of "immunotherapies" that help the body recognize and attack cancer. The FDA has granted more than 80 uses for those drugs since 2015, pushing up annual accelerated approval tallies.

Additionally, covid-19 pandemic disruptions forced some drugmakers to cut short research plans, asking the FDA for accelerated approval based on partially completed studies, instead of on full results.

"There was a lot of reinterpretation of the FDA rules to make sure those companies could proceed; otherwise they would have lost billions of dollars," said Sam Kay, a consultant with Clarivate, which advises pharmaceutical companies.

It's a reminder of how much flexibility the FDA has. Many of the reforms pending in Congress "are things the FDA could do now," notes Ramachandran.

"I think having Congress do it gives them the cover and blessing to carry forward with what they want to do," she said.