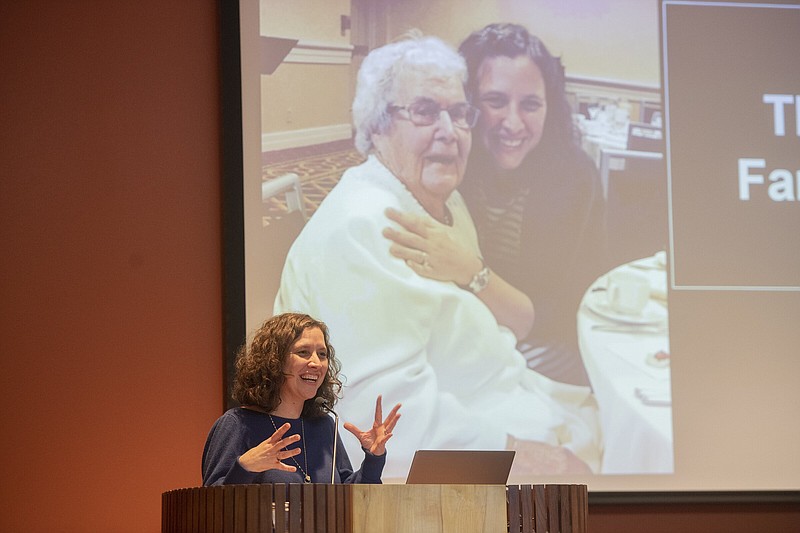 Courtney Doi speaks at the Fayetteville Public Library on Wednesday, sharing the story of her grandmother, Judith Klein, the youngest of six children, who left Berlin on the Kindertransport in December 1938 just after Kristallnacht. Klein’s father, grandmother, two aunts and two of her siblings died in concentration camps. (NWA Democrat-Gazette/J.T. Wampler)

FAYETTEVILLE -- The anti-Semitism that fanned the flames of the Holocaust is "still here -- I feel like you see it more and more every day," said Courtney Doi, which is one of the reasons she said she is so intent on telling the story of her grandmother, Judith Klein, and her family.

"I am the chosen family historian, and getting her words out is very important to me," said Doi, who discussed Klein's journey out of Germany as a teenage refugee, her extended family's experiences across Europe before, during, and after World War II, and Doi's own travels to Germany to further understand her family history Wednesday at the Fayetteville Public Library.

"It's a miracle I'm here to tell this story, [and] it makes me so happy that folks here -- and in other pockets of the country -- get to know [Klein's] story."

Doi, who lives in North Carolina, discusses her grandmother and family often at schools and other events, as she believes it can be easier for some people to comprehend the Holocaust through the personal tale of one individual, she said. She's heard people say, "it must be real if it happened to this person."

Klein was one of thousands of children and adolescents -- she was the 680th youth to be signed up for the Kindertransport -- the operation to evacuate Jewish children from Nazi-controlled areas of Europe to the United Kingdom between 1938 and 1940 -- who escaped Germany as the country's persecution of Jews became increasingly pernicious, Doi said.

She fled via ship to England -- where her elder sister had already settled -- in December 1938, but Klein's father, grandmother, two aunts and two of her siblings eventually perished under the Nazis.

Roughly 6 million Jews were murdered during the genocide by Nazi Germany and its collaborators. Romani people, Poles, Ukrainians, Soviet civilians and prisoners of war, Jehovah's Witnesses, Black people, people with disabilities, communists and gay individuals were also targeted in the systematic mass killing.

Before Adolf Hitler's rise to power in 1933, Klein enjoyed an idyllic childhood as the youngest of six children, and her family had been rooted in Germany since the 1700s, part of the reason "they could not imagine what was to come," Doi said. They prospered, with various members working as lawyers and bankers, but as Hitler began to constrain the civil and human rights of Jews, Klein's two oldest siblings left Germany.

The family could no longer make their cherished pilgrimages to the beach, and Klein was expelled from her public school; they also had to leave their country house -- "paradise" -- for an urban apartment in Berlin that was owned by her mother, who was not Jewish, Doi said. During "Kristallnacht," or the "Night of Broken Glass" -- a pogrom against Jews -- Nov. 9-10, 1938, Klein's father was beaten in front of the family and taken to a work camp.

After that, Klein -- who happened to be in a hospital due to an appendectomy during the "Night of Broken Glass" -- was shipped to England for her own safety, Doi said. There, she went to live with a foster family, then later worked in London, married a fellow Jewish refugee, and had three children.

Klein's father was beaten to death by the Gestapo when caught attempting to sneak two of his children out of the country with Dutch merchants, Doi said. Klein had to endure a lot of "death, she had to make a new home multiple times in different countries, and she had to bury two of her own children, but she always said she was a miracle -- it was her favorite word."

Klein's first marriage "was not good," but she met her second husband at the London School of Economics when they were students, Doi said. He took her and her children to the U.S., and she eventually taught at the University of Maryland.

She even reclaimed an estate that had been taken from her family by the Nazis -- "taking away their property was one way they got rid of the Jews" -- as part of a reparations suit, and it was on Doi's first journey to Germany with her grandmother that Klein opened up about her past, Doi said. "She held off on telling me about it until I was older, because she'd been very open with her young [sons], and they had nightmares."

Though Doi made two trips to Germany with her grandmother -- as well as another with her own daughter and a fourth with her grandfather -- her own father won't step foot in Germany, nor will he discuss anything related to the Holocaust with Doi, she said. "It's too close for him."

Doi's grandmother, who died in 2016 at age 91, spoke four languages, read constantly, and kept copious journals, which Doi inherited, she said. She also spent summers with her grandmother for a decade growing up, and it's through Klein's stories and writings that Doi had been able to create such an extensive historical record.

Wednesday's event complemented "Americans and the Holocaust: A Traveling Exhibition for Libraries," which ends its run at the University of Arkansas, Fayetteville campus today after a month on display, so there's "one last chance" to view it, Kara Flynn, education and engagement archivist for University Libraries at UA-Fayetteville, said Wednesday. This is the only time the exhibit is in Arkansas during its tour of the country.

Previously, exhibits like this would stop mostly at museums, but public and campus libraries are the focus this time, said JoAnna Wasserman, education initiatives manager at the William Levine Family Institute for Holocaust Education, United States Holocaust Memorial Museum. "We wanted to take it where there might be more exposure and to places that people might go for other reasons," because the goal is to reach "audiences that may be underserved by Holocaust education."

It's "so important to have this exhibition in a library," Doi said. "Not everyone will walk into a Holocaust museum, but they will walk into a library for something unrelated, and then they'll see the exhibit."

Doi is passionate about preventing modern genocide -- "it keeps happening," even after the horrors of the Holocaust -- and succoring genocide victims, she said. "Volunteer -- there are refugees fleeing [genocide] now and coming to towns all over the U.S. I urge you to support the organizations in your community" that aid those individuals.