Remarks made after board discusses fire equipment by Joseph Flaherty | December 8, 2022 at 3:45 a.m. 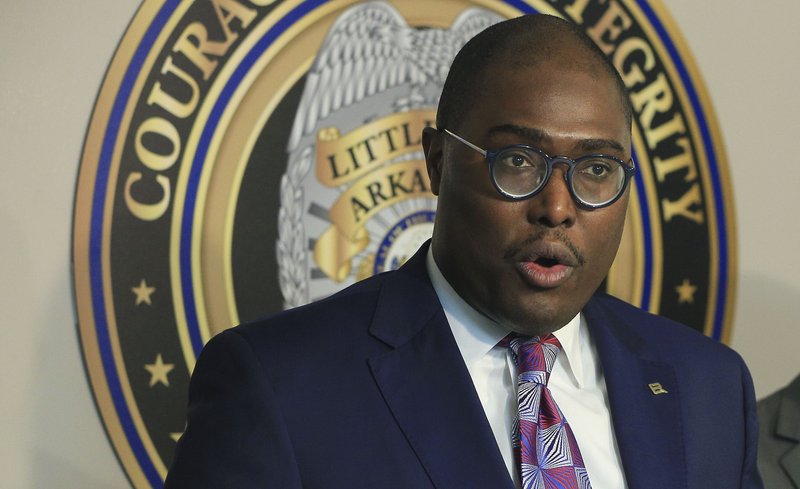 Little Rock Mayor Frank Scott Jr. on Tuesday suggested that city officials will need to examine a sales-tax increase in the near future, possibly within the next 18 months.

His remarks came during a discussion related to Fire Department apparatus at a city board meeting.

Scott told board members that they will have to "make some serious decisions" in 2024 and 2025 with regard to budget priorities.

Referring to a need for new revenue, Scott asked board members to put the idea of a sales tax on their radar for the next year to 18 months as something that will probably come before the board for consideration.

The comments were the clearest signal yet that the 39-year-old mayor will pursue a new tax during his second term after winning reelection Nov. 8.

At the same time, Scott indicated that officials would continue to monitor the status of inflation or a possible recession.

Shortly before Scott made his remarks concerning a new tax, Ward 1 City Director Virgil Miller Jr. expressed shock and outrage about the state of the Fire Department's fleet.

In a September 2021 special election, Little Rock voters rejected a sales-tax increase Scott had proposed. The "Rebuild the Rock" package would have funded various initiatives over 10 years by adding 1 percentage point to the local rate.

An estimated $530 million in new revenue over the 10-year lifetime of the tax would have funded public safety, parks, infrastructure and more. The proposed tax was defeated 62%-38%.

Also last year, city officials opted not to renew a 10-year sales tax for capital improvements. The three-eighths percent (0.375%) tax expired at the end of 2021.

More recently, Little Rock voters in August approved a $161.8 million bond issue tied to an extension on a property-tax levy of three mills. (A mill is one-tenth of a cent, meaning each mill translates to one dollar in tax paid on every $1,000 of the tax-assessed value of a piece of property.)

Scott has made references to the possibility of instituting a new tax before.

On Sept. 21, Scott told a crowd at a community meeting that the city would "probably" have to pursue a sales tax specifically to fund infrastructure work at some point in the future.

And in an interview in the lead-up to the Nov. 8 election, Scott left the door open to a new tax to fund planned initiatives during a second term, though he said he would have to work with the city board.