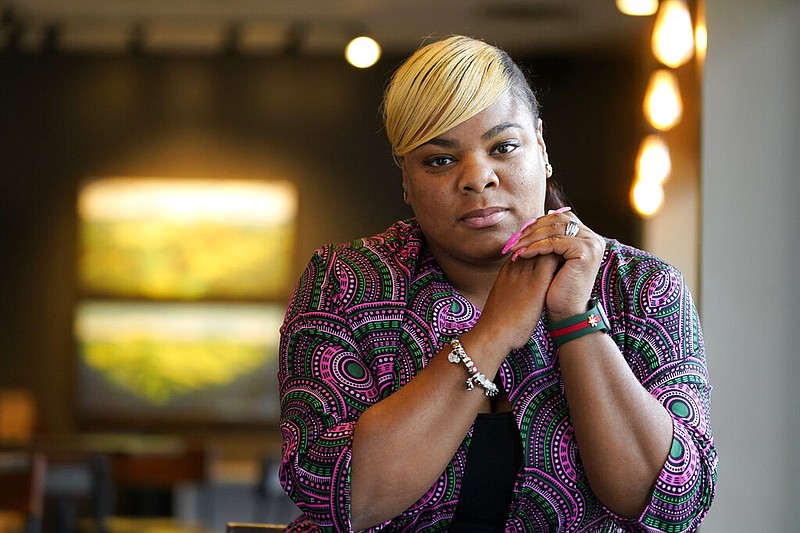 Tanita Hilliard sits for a portrait on Oct. 25, 2022, in Memphis, Tenn. When a young man live streamed himself driving around Memphis and shooting at people, she recognized the man as Ezekiel Kelly, one of her former middle school students. Kelly is accused of killing three people and injuring three others. (AP Photo/Mark Humphrey)

MEMPHIS — Tanita Hilliard made a wish the night a shooter livestreamed himself driving around Memphis, firing at people: “I hope it isn’t one of my babies.”

She paused the video to study the young man.

“I know that face,” she thought.

She sent a screenshot to some former students.

Is this him? she asked. It’s him, came the replies.

“Him” was Ezekiel Kelly, one of Hilliard’s former middle school students, now accused of killing three people, wounding three others and bringing the city to a terrified standstill that early September night. The shootings followed other high-profile killings in Memphis — a kindergarten teacher, Eliza Fletcher; a community activist, Yvonne Nelson; and the Rev. Autura Eason-Williams, a leader of the local conference of the United Methodist Church. Last year, Young Dolph, the rapper and businessman, was ambushed while visiting a bakery.

Even before Memphis, like other cities, endured a surge in homicides in 2020 during the pandemic, it suffered for decades from disproportionately high homicide rates. But the escalation in killings in 2020 seized the attention of many, including Patrick Lawler, who runs a local nonprofit. His response was to establish an ambitious program to address it.

For more than 35 years, Lawler's organization, Youth Villages, has counseled children with mental health or behavioral problems. His organization had not worked with adults before, much less potentially violent ones, and Lawler said he typically tried to avoid news coverage of local crime. But the latest killings pushed Lawler to a breaking point.

“I started asking around," he said. "What was our community doing to reduce gun violence, and why weren’t we more involved?”

Instead, he discovered a body of research suggesting that a surprisingly small number of people, generally acting in groups, are behind most shootings. In some other cities, community programs had reduced gun violence by identifying and then intervening with those most likely to be either victims or perpetrators.

Youth Villages set a lofty goal: It would raise $60 million from donors over four years, with the intent of reducing homicides in Memphis by 30% by 2026. It's among the largest recent commitments to community violence interruption anywhere in the country.

So far, Youth Villages has raised $16 million to design and launch its initiative, called Memphis Allies — including $3 million from the Ballmer Group, co-founded by former Microsoft CEO Steve Ballmer and his wife, Connie. Organizers hope for further aid, including from the federal government.

Memphis Allies' goal is to target the seven neighborhoods in Memphis with the most reported homicides. It's embraced a plan to employ “credible messengers” — people with long-standing relationships in the neighborhoods who have lived among or survived shootings. These messengers then connect with people most at risk of involvement in gun violence and provide them with counseling for anything from housing to job training.

Youth Villages drew on research from practitioners and academics like David Kennedy, director of the National Network for Safe Communities at the John Jay College of Criminal Justice in New York City. Kennedy's network documented that among a range of cities from 2014-2018, less than 1% of their total population was involved in more than half the city’s shootings.

Extrapolating from that figure, Lawler’s team estimates that only about 500 to 600 people in Memphis are at high risk of involvement in gun violence and that shooters are not predominantly teenagers or very young adults. They determined that the average age of suspected shooters in Memphis was 28.

All that knowledge helped Memphis Allies create a roadmap that focuses on the most likely victims or perpetrators of gun violence and offers them a path away from it. Many involved in gun violence, Lawler said, don't know how to safely extract themselves.

Decades of research and projects in such cities as Oakland, Boston and Chicago have shown how conflicts among small groups in a community who are connected to each other — through families, gangs or cliques — are a key predictor of future violence. Kennedy, who has consulted with Memphis officials, said it's been difficult to convince people that gun violence tends to be narrowly concentrated within communities and that intervention could significantly reduce it. A Justice Department assessment of a similar program in Boston in 2011 classified it as “effective” — its highest rating.

Youth Villages canvassed Memphis organizations to find potential partners and sent staffers around the country to learn from experts. The process stretched over a year.

Lawler is quick to acknowledge that his organization's mission is daunting, with a successful outcome far from assured.

“All of a sudden," he said, “we’re venturing into the most violent people in the community."

Among the challenges in raising money is educating donors skeptical of Lawler's ideas.

Successful community programs, Lawler said, should “be led by an entity that is not surrounded by temporary funding and an elected official. Because they come and go.”

Memphis has already funded an anti-gun violence program, called 901 Block Squad, though on a smaller scale and with less funding than what Youth Villages is pursuing. (Mayor Jim Strickland initially accepted a request for an interview to discuss Memphis' approach to gun violence. His office later said he was unavailable.)

The Rev. Earle Fisher, who leads the Abyssinian Missionary Baptist Church and whose colleague Autura Eason-Williams was among the victims of recent violence, expressed skepticism that Youth Villages can help reduce shootings, given the group’s lack of experience with the problem. Fisher said he was also concerned that having a community group assume a key role in addressing violent crime might allow the city to shed some responsibility for the crisis.

“How is government not at the forefront of this?” Fisher asked.

Staffers of Memphis Allies, which officially launched in July, meet every Monday to review each shooting in the area during the previous week and discuss ways to connect with anyone who had been either a victim or a shooter.

Most of the group’s time, though, isn’t spent in conference rooms. Street outreach teams visit the sites of recent shootings and keep returning until they form connections with people.

It’s a slow build, with conversations starting about music, sneakers or sports. Given the proliferation of guns in Memphis and elsewhere, the staff assumes everyone could be armed.

“The biggest thing,” said one outreach worker, Valentino Smith, “is being embarrassed on social media, sort of like, ‘You embarrassed me, so I’m going to show you that I’m harder than you.’ It’s almost like they’re competing for strength, but they’re killing each other in numbers.”

Eventually, outreach workers will ask potential participants if they want to take part in Memphis Allies. Once they do, the program will pay for such expenses as housing, utility bills, food and phones. Participants may be paid between $50 and $150 weekly, depending on whether they fulfill a series of obligations — which include staying in touch with their care team and avoiding conflicts on social media. They also must advance toward larger goals, like finding a job, learning a skill or obtaining housing or regular access to food.

One participant had spent so much of his life incarcerated that he didn’t know how to use a washing machine the organization had made available. Others don't know how to read and can’t fill out job applications or lack documents needed to obtain employment. Memphis Allies guides them through such tasks, along with providing mental health treatment.

“To see my young gang members that I’ve had for four to five years now, working on a computer, now taking notes, now getting up early in the morning to go to a scene or staying up late to make sure the neighborhood’s good. ...” Vinessa Brown, its executive director, said with pride.

Brown has heard criticism about Youth Villages' initiative as another white-led project, created to receive donations that could instead go directly to Black-led nonprofits — an issue that minority-led philanthropic groups have raised for decades. She acknowledges that her group and Youth Villages have had to work through issues stemming from the systemic racism that has long existed in philanthropy. But she says the partnership has taught both groups plenty: “Screw the color thing. Let’s just get the work done.

The life coach Florence Brooks previously worked as a dental assistant, a job for which she could probably earn more money. But she said she feels a deep connection to this work and is committed to helping pull people out of the cycles of violence that she herself endured for years.

Now 48, she was stabbed by a former partner and was imprisoned for shooting at him in response. He survived but was shot to death in 2020.

Some people, she said, assume there’s no way out of the tangled problems that individuals involved in violence frequently struggle with, from hunger to abuse.

“I think some people think there is no hope," Brooks said. "We’re doing it because there is hope because I’m standing here. I’m their hope. I’ve been where they are, and look at me now.”

Hilliard, the educator, said that when a young person they know is shot, she and her colleagues sometimes ask themselves whether they could have intervened earlier.

“Where did we miss the mark?” she says they’ll ask. “And in what way do we stop missing the mark?”

For Lawler, the answer is to keep working.

“This is an ultramarathon,” he said. “This is not something that we are going to resolve in a few years.”

Eventually, he said, he hopes to win support from “the most generous philanthropists,” whose donations could help reduce gun violence and save lives.