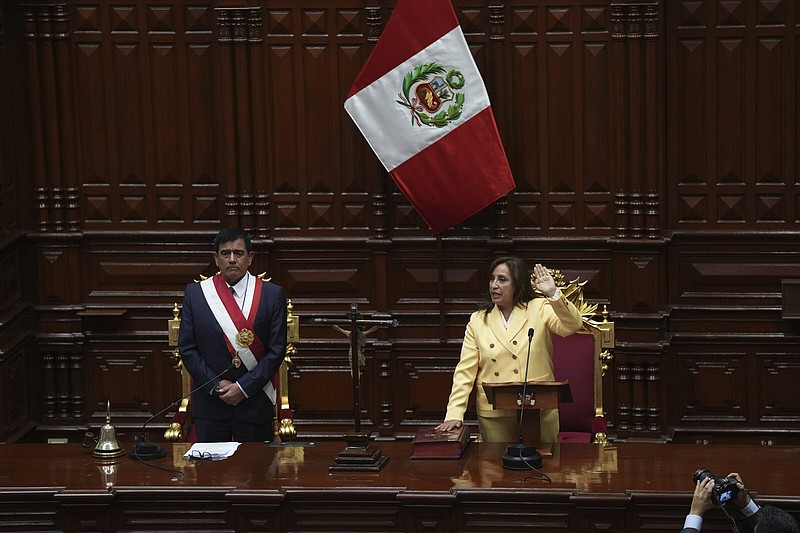 Former Vice President Dina Boluarte takes the oath of office next to Congress President Jose Williams on Wednesday during her swearing-in ceremony to become president in Lima, Peru. (AP/Guadalupe Pardo)

LIMA, Peru -- Vice President Dina Boluarte was sworn in Wednesday as Peru's next president after Congress voted out President Pedro Castillo shortly after he dissolved the legislative body.

The 60-year-old lawyer took the oath of office and became the first female leader in the more than 200-year history of the independent republic.

Her swearing in capped hours of uncertainty as both the president and Congress appeared to exercise their constitutional powers to do away with each other.

Boluarte said her first order of business would be to address government corruption, ostensibly what felled Castillo.

"There has been an attempted coup ... that has not found an echo in the institutions, nor in the street," Boluarte said. She called for a political truce to install a national unity government.

"What I ask for is a space, a time to rescue the country," she said.

Bilingual in Spanish and Quechua, Boluarte was elected as vice president on the presidential ticket that brought Castillo to power July 28, 2021. During Castillo's brief administration, Boluarte was minister of development and social inclusion.

Earlier Wednesday, Peru's Congress removed Castillo from office shortly after he had decreed the dissolution of the legislature ahead of a scheduled vote to oust him.

The national ombudsman's office, Constitutional Tribunal and Supreme Court called Castillo's move to dissolve the Congress a coup, although at least one expert disagreed.

Lawmakers voted 101-6 with 10 abstentions to remove Castillo from office for reasons of "permanent moral incapacity."

Castillo left the presidential palace in an automobile that carried him through Lima's historic downtown and later entered a police station, where his status was not immediately clear. In a photograph circulated by the national police on Twitter, which was later erased, Castillo was visible seated inside the station surrounded by officers.

Shortly before the vote, Castillo announced that he was installing a new emergency government and called for the next round of lawmakers to develop a new constitution for the Andean nation. He said during a televised address that he would rule by decree meanwhile, and ordered a nightly curfew starting Wednesday night.

Castillo also announced that he would make changes in the leadership of the judiciary, police and constitutional court. The head of Peru's army then resigned, along with four ministers, including those over foreign affairs and the economy.

Castillo took action as his opponents in Congress moved toward a third attempt to remove him from office.

The Ombudsman's Office, an autonomous government institution, said before the congressional vote that Castillo should resign and turn himself in to judicial authorities. After years of democracy, Peru is in the midst of a constitutional collapse "that can't be called anything but a coup," the statement said.

"Mr. Castillo must remember that he was not only elected president of the republic, but also that the people elected representatives for public service," the statement said. "Castillo's actions ignore the will of the people and are invalid."

The congressional vote called for Boluarte to assume the presidency. Boluarte via Twitter rejected Castillo's actions, saying "it worsens the political and institutional crisis that Peruvian society will have to overcome with strict adherence to the law."

Castillo has denied allegations of corruption against him, saying they're based on "hearsay statements by people who, seeking to lighten their own punishments for supposed crimes by abusing my confidence, are trying to involve me without evidence."

Federal prosecutors are investigating six cases against Castillo, most of them for alleged corruption, under the theory that he has used his power to profit from public works. 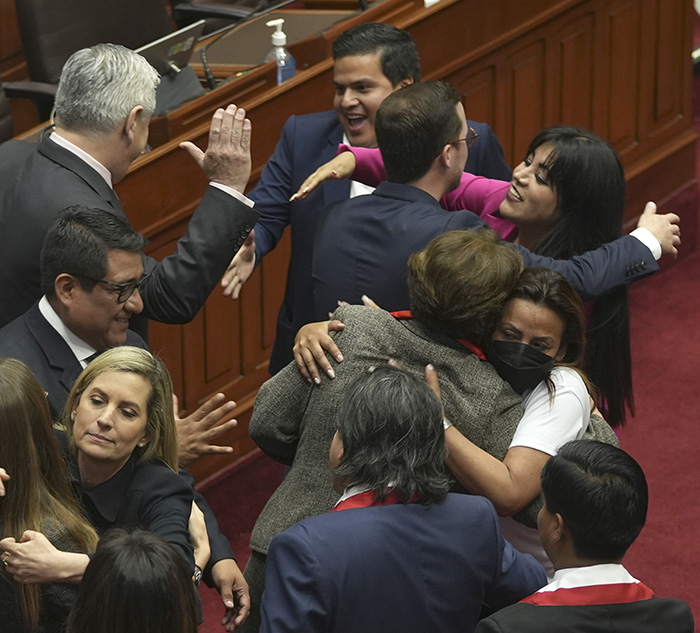 Lawmakers celebrate Wednesday in Lima, Peru, after voting to oust President Pedro Castillo after he tried to dissolve Congress and take sole control of the government. Castillo was later arrested on a charge of rebellion and accused of violating constitutional order, and Vice President Dina Boluarte replaced him as president. (AP/Guadalupe Pardo)