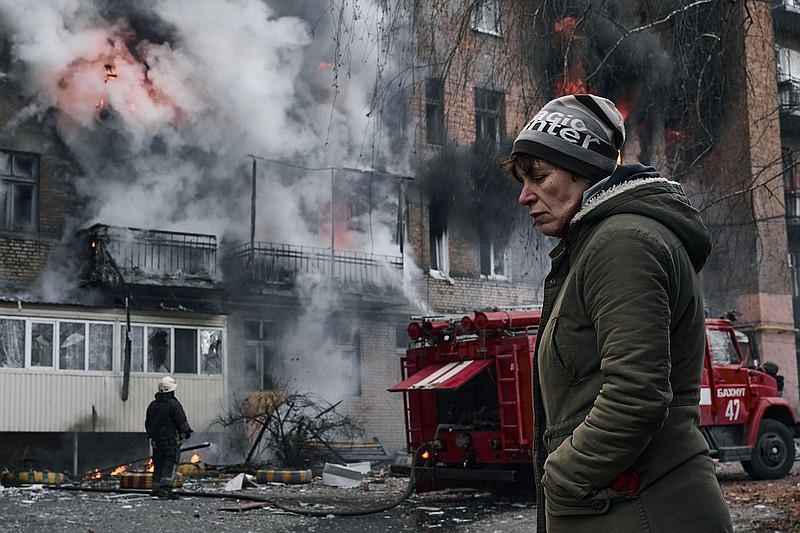 A woman walks outside her burning home Wednesday in Bakhmut in Ukraine’s Donetsk region after a Russian attack. (AP/LIBKOS)

KYIV, Ukraine -- Russian President Vladimir Putin acknowledged Wednesday that his "special military operation" in Ukraine is taking longer than expected but said it has succeeded in seizing new territory and added that his country's nuclear weapons are deterring escalation of the conflict.

"Of course, it could be a lengthy process," Putin said of the more than 9-month-old war that began with Russia's invasion Feb. 24 and has displaced millions from their homes, and killed and wounded tens of thousands. Despite its length, he showed no signs of letting up, vowing to "consistently fight for our interests" and to "protect ourselves using all means available." He reiterated his claim that he had no choice but to send in troops, saying that for years, the West responded to Russia's security demands with "only spit in the face."

Speaking in a televised meeting in Russia with members of his Human Rights Council, Putin described the land gains as "a significant result for Russia," noting that the Sea of Azov "has become Russia's internal sea." In one of his frequent historic references to a Russian leader he admires, he added that "Peter the Great fought to get access" to that body of water.

After failing to take Kyiv due to fierce Ukrainian resistance, Russia seized broad swaths of southern Ukraine at the start of the invasion and captured the key Sea of Azov port of Mariupol in May after a nearly three-month siege. In September, Putin illegally annexed four Ukrainian regions even though his forces didn't completely control them: Kherson and Zaporizhzhia in the south, and Donetsk and Luhansk in the east. In 2014, he had illegally annexed Ukraine's Crimean Peninsula.

In response to an increasing influx of advanced Western weapons, economic, political and humanitarian aid to Kyiv and what he saw as Western leaders' inflammatory statements, Putin has periodically hinted at his potential use of nuclear weapons. When a member of the Human Rights Council asked him Wednesday to pledge that Russia would not be the first to use such weapons, Putin demurred. He said Russia would not be able to use nuclear weapons at all if it agreed not to use them first and then came under a nuclear strike.

"If it doesn't use it first under any circumstances, it means that it won't be the second to use it either, because the possibility of using it in case of a nuclear strike on our territory will be sharply limited," he said.

Putin rejected Western criticism that his previous nuclear weapons comments amounted to saber-rattling, claiming they were "not a factor provoking an escalation of conflicts, but a factor of deterrence."

"We haven't gone mad. We are fully aware of what nuclear weapons are," Putin said. He added, without elaborating: "We have them, and they are more advanced and state-of-the-art than what any other nuclear power has."

He said that even though the threat of a nuclear war "is growing," the Kremlin was not going to "brandish these nuclear weapons like a razor."

In his televised remarks, the Russian leader didn't address Russia's battlefield setbacks or its attempts to cement control over the seized regions but acknowledged problems with supplies, treatment of wounded soldiers and limited desertions.

Russian troops have withdrawn not only from the Kyiv area and around the country's largest city, Kharkiv, but from a large part of the Kherson region. Another problem for Putin are attacks this week against air force bases deep inside Russia. He put much of the country, especially border areas, on security alert recently, and fresh signs emerged Wednesday that Russian officials are strengthening border defensive positions.

In the Kursk region bordering Ukraine, the governor posted photos of new concrete anti-tank barriers -- known as "dragon's teeth" -- in open fields. On Tuesday, the governor had said a fire broke out at an airport in the region after a drone strike. In neighboring Belgorod, workers were expanding anti-tank barriers and officials were organizing "self-defense units." Belgorod has seen numerous fires and explosions, apparently from cross-border attacks, and its governor reported Wednesday that Russia's air defenses have shot down incoming rockets.

Moscow responded with strikes by artillery, multiple rocket launchers, missiles, tanks and mortars at residential buildings and civilian infrastructure, worsening damage to the power grid. Private Ukrainian power utility Ukrenergo said temperatures in eastern areas where it was making repairs had dropped to as low as near zero Fahrenheit.

At his meeting, Putin discussed the mobilization of 300,000 reservists that he ordered in September to bolster forces in Ukraine. He said only about 150,000 have been deployed so far to combat zones and the rest are still undergoing training. Addressing speculation that the Kremlin could be preparing another mobilization, Putin said: "There is no need for the Defense Ministry and the country to do that."

About 77,000 conscripts are currently engaged in fighting in Ukraine, he said, and others are serving in territorial defense units or aiding training efforts.

Those attacks, combined with the conscription of hundreds of thousands of men to join the fighting ranks, have brought the reality of war closer to the attention of a largely apathetic Russian population.

"The people are getting tired, and Putin knows that a protracted war cannot be popular," said Abbas Gallyamov, a political scientist who once wrote speeches for Putin but has broken with him. "He does not want a second wave of mobilization, and is trying to show that he has enough men to last through the winter."

Gallyamov said the Kremlin was betting that winter conditions would reduce the intensity of the fighting and that the conflict would settle into a war of attrition favoring Russia, as the reduction of Russian energy deliveries to Europe gradually erodes Western support for Ukraine.

At the human rights council meeting, Putin said that Russia had no choice but to intervene militarily in Ukraine in response to Western-backed aggression against ethnic Russians there, a claim the Kremlin has often made to justify the war.

Putin announced the "partial mobilization" of troops in late September after a series of setbacks on the battlefield, a move Western analysts said highlighted Russia's disastrous losses of professional soldiers.

The decision shook Russian society. Thousands of Russians rushed to leave the country, some paying exorbitant prices for flights to whatever destinations they could manage to get tickets to.

Chaos and inefficiency hampered the mobilization. Many conscripts have reported that little training was provided and that whole units were left without commanders. Some complained that they had to buy their own equipment and uniforms.

In the face of criticism, Putin announced the end of the call-up in October, although he did not issue an official order to stop it. That has prompted fears that the Kremlin might announce another wave at any moment.

Putin's increasingly vague, often self-contradicting, statements about the war suggest that the president does not have a coherent military strategy to present to the Russian public and the country's elite, said Tatiana Stanovaya, a senior fellow at the Carnegie Endowment for International Peace, a research group.

"He thinks of this as his historical mission, the cross on his shoulders," she said. "He has nothing to share with the people."

Information for this article was contributed by E. Eduardo Castillo, Jamey Keaten, Yuras Karmanau, Lorne Cook, Joanna Kozlowska and Andrew Katell of The Associated Press and by Ivan Nechepurenko and Anatoly Kurmanaev of The New York Times. 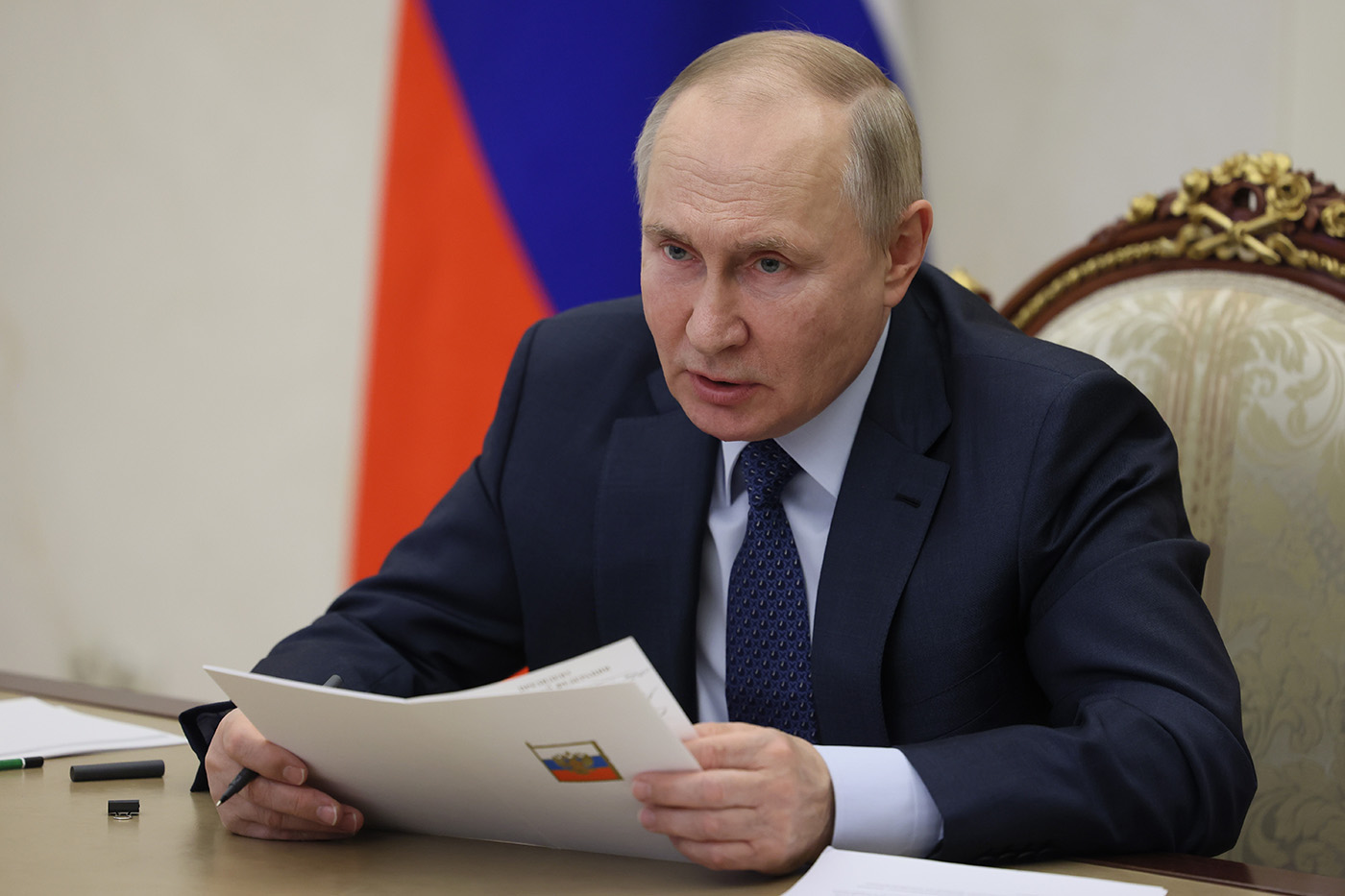 Russian President Vladimir Putin attends a meeting of his Human Rights Council via videoconference Wednesday in Moscow. He downplayed the nuclear threat, saying, “We haven’t gone mad. We are fully aware of what nuclear weapons are,” but claimed Russia’s nuclear arsenal is more advanced than any other nuclear power. (AP/Kremlin/Sputnik/Mikhail Metzel)