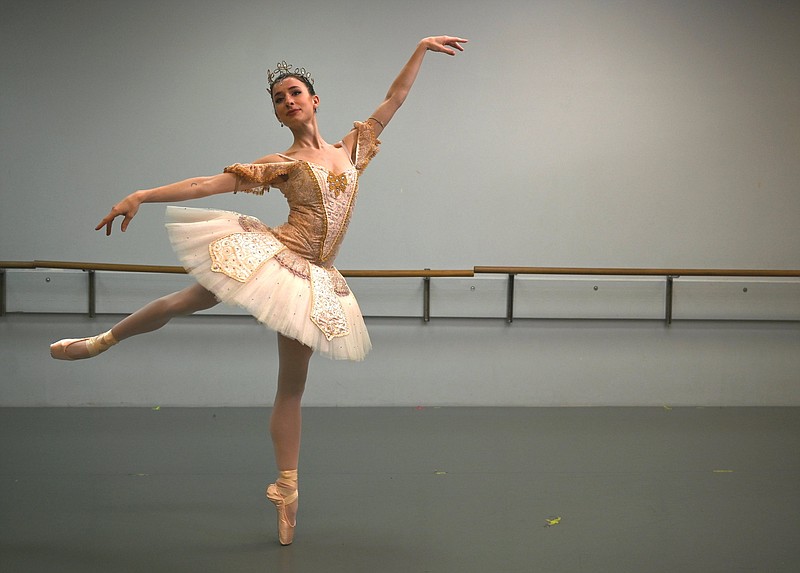 Sage Feldges is one of two Ballet Arkansas company members dancing the role of the Sugar Plum Fairy in “The Nutcracker.” (Arkansas Democrat-Gazette/Stephen Swofford)

Peter Ilich Tchaikovsky's "The Nutcracker" debuted in St. Petersburg, Russia, the week before Christmas 1892, which would make this year the ballet's 130th anniversary.

Ballet Arkansas started performing it in Little Rock, based on the adaptation by the legendary George Balanchine, a few decades later.

Now billed as the "Nutcracker Spectacular," this year's production, Friday-Sunday at Little Rock's Robinson Center Performance Hall, features the company's 15 professional dancers in prominent solo roles as well as in the corps de ballet; a community cast of more than 200 children and adults; the Arkansas Symphony Orchestra in the pit, under the baton of Geoffrey Robson; and the Mount St. Mary Academy Belles and Bryant High School Choirs will sing during the "Snow Scene" that closes Act I.

Select performances will also feature special appearances by Santa Claus, who will be reading Clement Moore's "A Visit From St. Nicholas," aka "'Twas the Night Before Christmas," during the intermission of each performance.

In Balanchine's version of Tchaikovsky's classic Christmas tale, based on a story by E.T.A. Hoffman, a young girl's gift of a magical nutcracker doll from her mysterious Uncle Drosselmeyer expands — in her dreams? in reality? — to save her in an epic battle between toy soldiers and ravening rodents (which she helps win by beaning the Head Rat with her slipper).

The grateful Nutcracker Prince then takes her on a journey across a snowy landscape into the Land of Sweets, presided over by the Sugar Plum Fairy and her Cavalier, where Clara is hailed as a heroine and feted with a series of choreographic spectacles.

While keeping the overall ballet intact, Executive and Artistic Director Michael Fothergill and his wife, Catherine Fothergill, the company's associate artistic director, have been making changes to the choreography, scene structure and wow factors each year since they took over the ballet company in 2017.

Some of it is based on who's dancing what roles, and some of it is to keep the production fresh for those who attend every year while appealing to those attending for the first time.

And if their "Nutcracker Project," a two-year capital campaign they've just launched to raise $75,000 toward new sets, costumes and hand props, reaches fruition, there will be even more significant changes to come.

Michael Fothergill, the chief choreographer, cites this year's show as the first to feature the company's eight new dancers. "I chose to reimagine the choreography for the second-act divertissements to highlight the capabilities of the new company members," he explains.

Lauren Yordanich and Sage Feldges divide the role of the Sugar Plum Fairy. Andrew Przybylowicz and Aldrin Vendt alternate as the Cavalier.

In the first act, he says, "the battle scene has a lot of dance in it and some new swordplay. We've upped the 'pyrotechnics' in the Snow Pas." Brittany Harano and Kerridwyn Schanck dance as the Snow Queen in alternate performances, with Vendt and/or David Cummings as the Snow King.

And following the departure of longtime Drosselmeyer Stephen K. Stone, formerly of the faculty at the University of Arkansas at Little Rock who now teaches at the University of Wisconsin at Eau Claire, Fothergill has reworked the role; this year, spread over four performances, there are "three very different interpetations — a very old Drosselmeyer, a very kooky Drosselmeyer and a very debonair Drosselmeyer." The choreography is the same for all three, Fothergill says, but "they have the ability to take liberties, with the pantomime and the gestures, and the non-choreographic interactions with other characters onstage is quite different."

There are some minor changes in the party scene, with the advent of company member Lauren Hill, who has been on maternity leave, taking over the role of Mother Stahlbaum, adding more dancing elements and the kind of interaction she has with Clara. 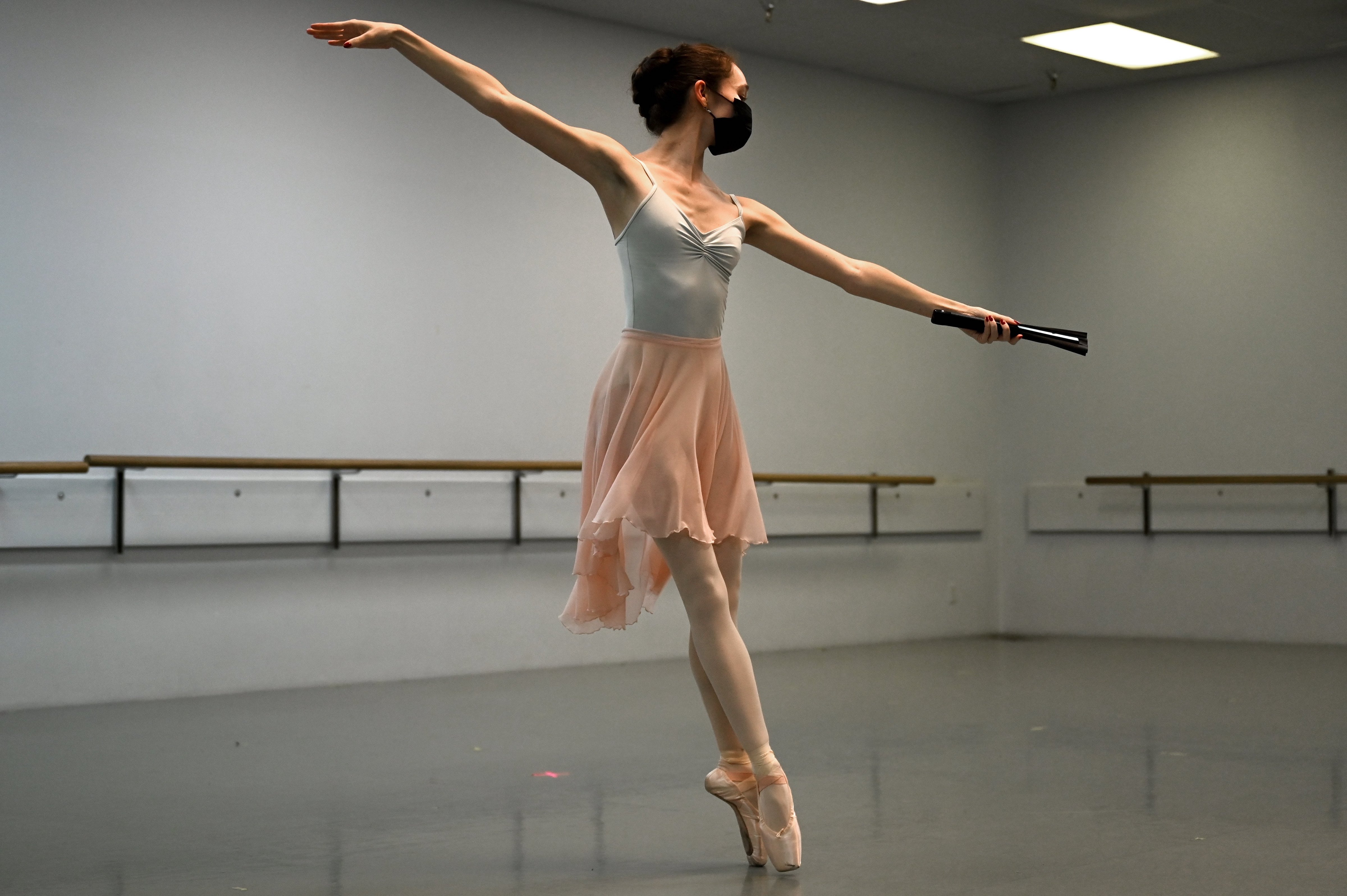 Fothergill explains that the "Nutcracker Project" is vital to the long-term growth of the company's annual "Nutcracker" production, which, as with most American ballet companies, is the prime "breadwinner" in terms of making the money that supports all the company's other functions and performances.

Rather than do it the way many companies do, which is to create a new design and then go out and seek the money to fund it, Fothergill says, here they are doing the reverse: raising the money, and then seeking designers, preferably local, to create new production elements.

"We want to repurpose the set pieces, come up with a new color spectrum, and remove the 'ethnicities' in the second act," he adds, focusing more on the "sweets" than the "lands."

In addition to hot chocolate and coffee, the Chinese Variation is "tea" and the Russian Variation, also known as the Trepak, is candy canes. Mother Ginger and her BonBons probably won't need to "relocate," Fothergill says, but he's hoping to create a new version of the costume — currently centered on a huge skirt — that will allow more young dancers to hide beneath it and provide more choreographic opportunities for more of the younger members of the community cast.

Many of Ballet Arkansas' current sets, backdrops and costumes are more than three decades old, he explains, and it takes 1,500 staff hours every year "only to keep them in shape" — and that doesn't involve the time and work involved in altering them onto that year's dancers.

New production elements will make possible new choreography, "not changing the the storyline or taking anything out of context, but being able to make things fresh and new and represent the city and the state." It might be possible to extend the run from one weekend a year to up to four weeks.

Fothergill says it is a goal to be able to tailor the sets in particular to make it possible to tour "The Nutcracker" to other parts of the state.

"Folks are having to come from far distances [to see 'The Nutcracker' in Little Rock] where otherwise we could take it to them," he says. "We want to make it more transportable. I hate having to say 'no' to 10 requests a year."

One possibility would be to stage "The Nutcracker" in Northwest Arkansas, where the company already has a fledgling presence, but where arts venues are bringing in touring productions from other places. (This year, for example, the Winnipeg Royal Ballet recently staged its "Nutcracker" at Fayetteville's Walton Arts Center.)

The ballet company could even work with community casts in other parts of the state; right now, young dancers are traveling hours back and forth to Little Rock from Russellville and even Fort Smith and Bentonville for rehearsals and performances.

Fothergill says another goal is for production elements to be "unique and designed by Arkansans. And commissions for build-outs could go to area high schools and universities." That would make it possible for color schemes of sets and drops costumes to match, for example.

"We want to make it more magical and create more wonder for more people," he says.