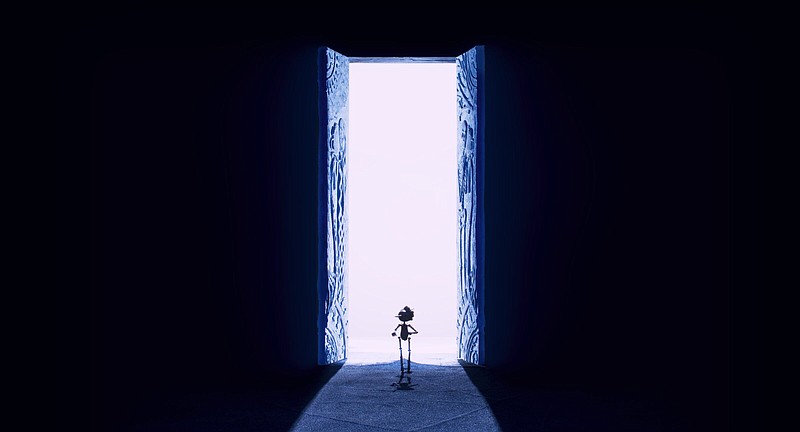 "Pinocchio" isn't the newest story around. (The original Italian book came out in 1883). But Guillermo del Toro's take on the tale is full of new visions that Walt Disney couldn't match on its best day.

Disney released a lackluster version of "Pinocchio" this year and even Tom Hanks couldn't save it. But I steadfastly awaited del Toro's version coming to Netflix. Because I believe in this director and his dedication to the craft of cinema.

"Guillermo del Toro's Pinocchio" (the full title) does what Disney's version could only hint at, investing the time necessary to show wood crafter Geppetto (David Bradley) with a son he loves dearly. Geppetto buys his son books, teaches him craftsmanship, and even sings him a song before bed each night that his wife used to sing. And, sure, everyone knows Geppetto will lose his son, but that shouldn't mean the film should skip or bypass this chunk of the story.

Geppetto's son ends up dying when an airplane flying overhead mistakenly drops a bomb on the cathedral they were working in. This version of Pinocchio is set during World War II. Authoritarianism and toxic masculinity are front and center, clashing with the doting father who tried to teach his son about love and beauty in the world.

Understandably, after the death of Carlo (Geppetto's son), the man falls into shambles, having truly lost the last good thing in his life. He stops crafting, barely eats, and turns to drink to drown his sorrows.

Years pass by, and a pine tree sprouts over Carlo's grave. This is where Sebastian J. Cricket (Ewan McGregor) enters the tale, making it a new home to write his memoir. And McGregor is one of the best parts of "Pinocchio." He serves as a wonderful narrator who can carry the somber weight of this grievous tale while still managing to tear out his beating heart and serve it to us on a platter.

For McGregor's Cricket is not the inspiring and bright-eyed character established by Cliff Edwards. He is older, world-weary, and probably looking for a quiet place to spend the last years of his life in solemn reflection. This makes him a more interesting choice to become the moral guide for our dear puppet.

In a fit of drunken anger one night, Geppetto chops down the pine tree and decides he'll make a new Carlo. But the piece of lumber he uses for the puppet's body ends up being the one Sebastian calls home. So, naturally, the cricket is dragged into the old man's workshop.

The world of "Pinocchio" crafted by del Toro reaches much further than the original tale, leaving some aspects of the traditional story, like Pleasure Island, behind to approach a different vision, one often touched by the supernatural.

And who is it that brings Pinocchio to life in this film? Not the traditional blue fairy, but instead the Wood Sprite (Tilda Swinton), who takes on the image of a more Biblical angel, carrying multiple wings and eyes. Was I surprised to see something straight out of Isaiah in this film? Maybe a little. But our intrepid visionary (alongside his co-director Mark Gustafson) infuses Catholicism into the setting and theme of this film, specifically where questions of obedience and order are concerned.

The Wood Sprite brings Pinocchio to life and offers Sebastian one wish in exchange for guiding the puppet toward being a boy who is good and morally upright. The next morning, Geppetto is realistically frightened by this living puppet, one who sings, dances, and destroys his workshop. There's only a handful of songs in "Pinocchio," but I loved every one of them, especially the puppet asking what each item in the craftsman's shop did.

Geppetto doesn't see Pinocchio as a replacement for Carlo and locks him up so he can go to church. But the energetic Pinocchio breaks free and follows him, horrifying worshippers at the cathedral.

I won't spoil the rest of the movie, which comes with several surprises and deviations from the tale Disney made famous in 1940. There's military boot camp, the traditional circus scam artist Count Volpe (Christoph Waltz), a sea monster, and so much more.

Perhaps the most fascinating deviation of del Toro's "Pinocchio" comes down to the afterlife. Pinocchio dies quite a few times in this film. And each time he wakes up in the afterlife, greeted by grim reaper bunnies (Tim Blake Nelson) who carry his casket and play cards.

In each instance of the puppet dying, Pinocchio has to wait with Death (also voiced by Swinton) for an increasing amount of time, visualized by larger and larger hourglasses, before being sent back. Death, the Wood Sprite's sister, explains to Pinocchio he's essentially immortal. And because he's not a real boy, the puppet won't age, having to watch Geppetto and Sebastian grow old and die while he carries on.

Del Toro doesn't bring much levity to this story, and I loved that. There are harsh consequences to the choices we make in life, and while there's magic in this story, it does little to carry the audience to "happily ever after." The director infuses quite a bit of dark fantasy into his latest film, a genre he's well versed in.

I value the risks "Pinocchio" took, and they all paid off. This is a film del Toro initially announced back in 2008, and it was entirely dead before Netflix bought the project and resurrected it.

The craftsmanship that goes into each and every character model -- from Geppetto to the background villagers -- is beyond inspiring. If I absolutely hated the characters and story, then the art alone would make this venture worth viewing. When you stop and think about the hundreds of thousands of still frames taken to create the illusion of movement within his stop-motion film, it's not hard to imagine the creative crew might cut corners somewhere to lighten the load.

But not del Toro. Even when working with tiny figurines and sets, he and cinematographer Frank Passingham still found ways to get the most creative shots imaginable. And, of course, they had help from Netflix's increasingly incredible in-house animation studio and even The Jim Henson Company. When you're making a film about a puppet, you call the puppet masters.

I have nothing but praise for this magnificent piece of art. "Guillermo del Toro's Pinocchio" is available today on Netflix. 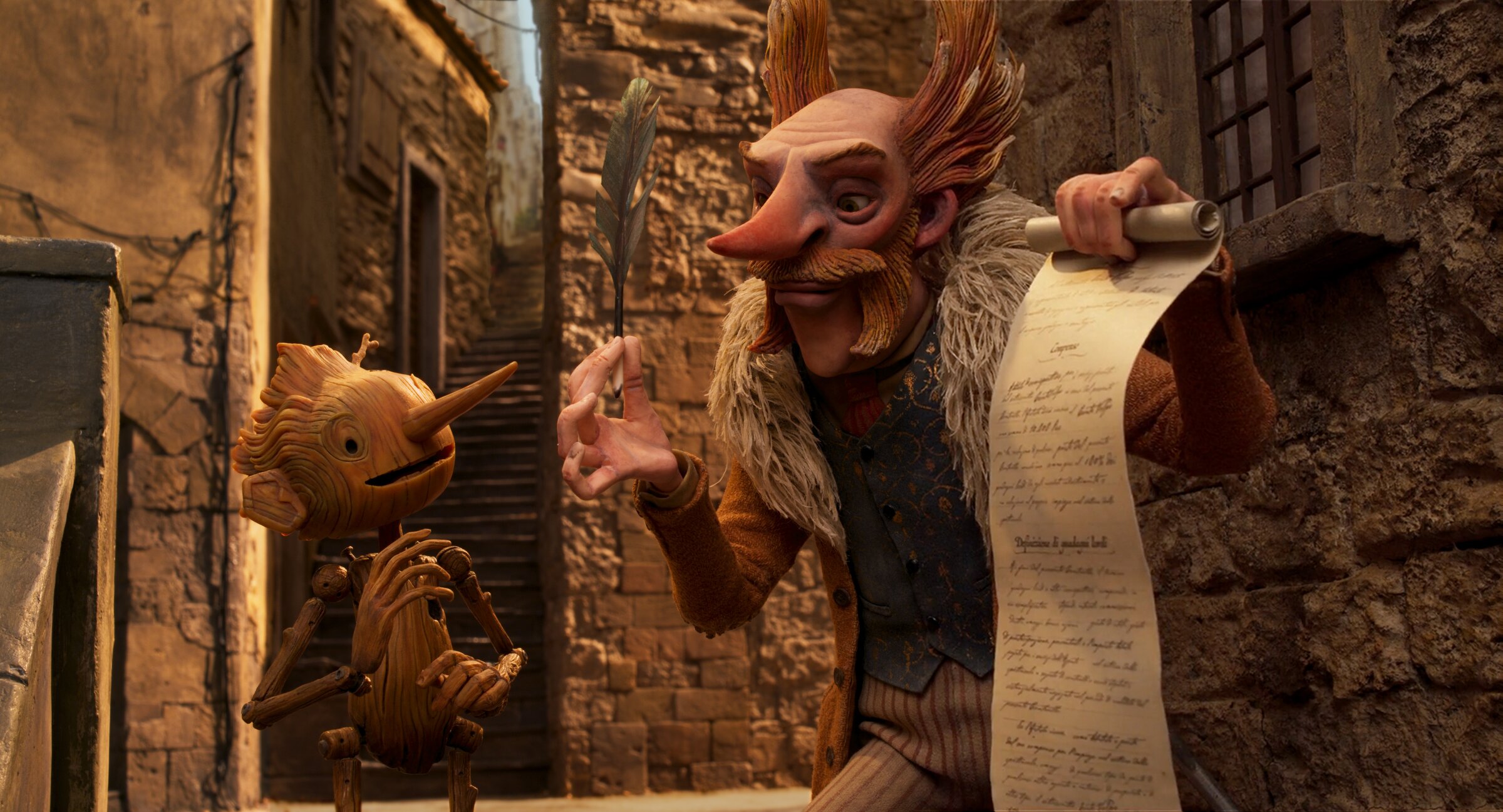 Wooden actor: Pinocchio (voiced by Gregory Mann) is courted by the evil puppeteer Count Volpe (Christoph Waltz), who wants him as part of his troupe in “Guillermo del Toro’s Pinocchio.”

Print Headline: A darker side