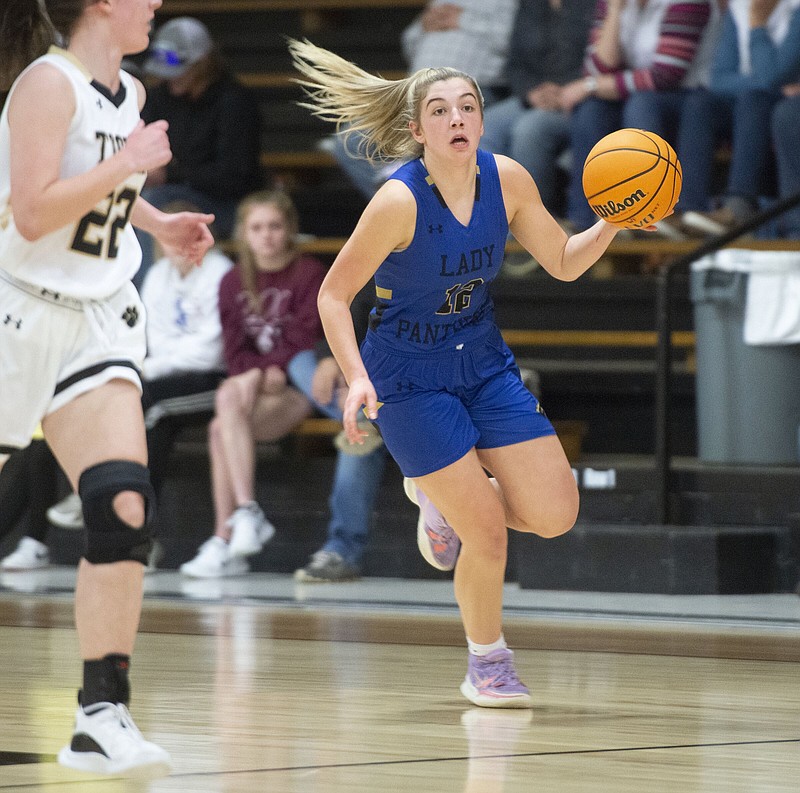 Bergman senior Maddi Holt is expected to be one of Class 3A’s top impact players to watch this year. Holt is back for the Lady Panthers, who are ranked No. 1 in the Arkansas Democrat-Gazette’s Class 3A girls Super Six rankings. (NWA Democrat-Gazette/J.T. Wampler)

FORT SMITH — Of all the first-round matchups at the star-studded 25th Tournament of Champions, there was only one that featured a pair of defending state champions.

Bergman was up to the challenge Thursday night.

Maddi Holt scored a game-high 17 points, including a team-high six in the final quarter, to guide Bergman in a opening-round win against Jones (Okla.) at Northside’s Grizzly Arena.

“We came in and had no clue who this was but coach for sure let us know about them,” Holt said. “They have a lot of talent, and we are so young this year. We automatically knew we needed to take pride in our defense and the offense would take care of itself.”

Bergman has been tested early and often this year, including facing powerhouse Farmington in a loss. Bergman coach James Halitzka could tell early his team was up to the task against a fellow defending champion.

“The classifications are different between the states, but it’s always interesting to see state champions play against each other who happened to be in 3A,” Halitzka said. “We were a little nervous early. But we started hitting outside shots. We’ve played some tough teams and we accepted this challenge in this game.”

Defense was a big part of the win for Bergman (15-1). They allowed Jones (0-1) to make 12-of-27 shots in the first half but improved after the break. The Lady Panthers allowed just nine-of-26 shots in the final two quarters to pull away.

Role players stepping up for Bergman was key as well. Ruby Trammell had 16 points. Kiersten Lowry added 15 points while making all five shots she attempted behind the line.

“We had so many players step up,” Holt said. “Lowry really carried us early with those threes. She literally guided us through the toughest times of this game. When we really needed a bucket, Trammell was there for us. This was a great team win with everyone playing a role.”

Bergman had four players hit a combined eight of 12 3-pointers in the game. Lowry, Holt, Trammell and Taryn Holt all contributed.

Jones, playing its first game of the year, was led by 13 points from Jaelen Maples, 12 from Sofi Woodson and 11 from Boston Berry.

The contest was tied at 14-14 after a quarter of play before Jones took a 25-24 edge into halftime. Bergman was able to obtain a 40-39 advantage heading into the final quarter.

That’s when Maddi Holt stepped up for the team in the fourth quarter with her team-high six points. She made all six of her free throws to help Bergman pull away in the first-round matchup.

“I still to this day get nervous in the fourth quarter,” Maddi Holt said with a laugh. “But I knew I needed to help out the team and do my part. My teammates were doing so much work. I wanted to hit those free throws and help us close it out.”

Carl Junction (4-0) advanced in a first-round matchup behind a 31-point effort from Destiny Buerge to hold off a late rally from Southside.

Carl Junction, who has won its district seven consecutive seasons, built an 18-10 lead after a quarter then a 34-20 edge heading into halftime. Southside (4-2) was down 43-27 entering the fourth quarter.

The Lady Mavericks outscored their opponent 20-9 in the final quarter but the come-from-behind attempt came up just short. They were led by Sophia Neihouse and Peyton Yaffe each scoring a team-high 12 points.

The defending Tournament of Champions winners are on to the second round with a strong second half.

Northside (5-0) was guided by a game-high 21 points from Erianna Gooden and 17 from Karys Washington. The Lady Bears held a 14-6 lead after a quarter but then just a 22-18 edge at the break. Northside opened up that advantage quickly after that with a strong defensive effort, taking a 45-23 lead into the final quarter. Stilwell (1-1) was limited to just five third-quarter points.