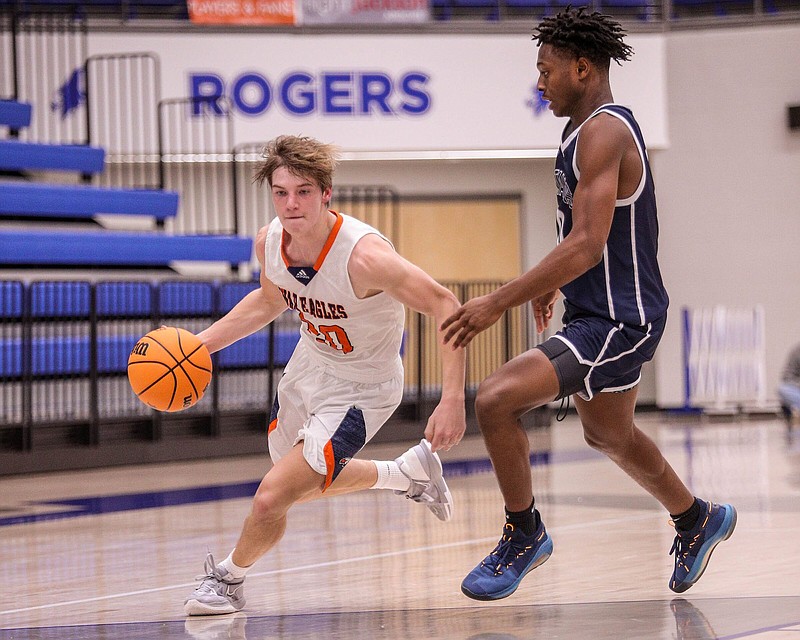 ROGERS -- Tom Olsen had no complaints about how Rogers Heritage's boys played during the first and fourth quarters of Thursday's game against Lee's Summit (Mo.) West.

The War Eagles' middle two quarters, however, is something he would rather forget. Heritage managed only three field goals and suffered numerous turnovers during that 16-minute stretch and dropped a 48-29 decision in the Arvest Hoopfest.

"They really locked us down," Olsen said. "We've got to do some things to secure the ball a little bit with our other guys. We're missing a kid that could have really helped us, and the other kids have to step up.

"It's the same old story. When we stopped turning the ball over, we started getting shots and quality shots. That second and third quarter, we really struggled."

Heritage (2-4) played without point guard and leading scorer James Isbell because of illness and was still within 10-9 of West. The War Eagles even had a chance to take the lead to end the first quarter but missed a 3-pointer from the wing at the buzzer.

Heritage, however, didn't score again until Alejandro Solis' putback with 1 minute, 49 seconds before halftime. That allowed the Missouri team (3-1) to score nine straight points for a 19-9 lead. The Titans enjoyed a 21-11 halftime cushion, then outscored the War Eagles 13-4 in the third and stretched their lead to a 34-15 margin.

"The second quarter, I thought we had some threes that, for us to beat a Lee's Summit West, we have to make those," Olsen said. "We had some plays where our big guys rolled to the basket, and we didn't finish those, either.

"Defensively and in rebounding, we played with them. We just couldn't find a way to score."

Ben Manuel finished with 15 points to lead Heritage, which comes back to play a 6 p.m. game today against Conway. Logan Bishop led West with 12 points while David Mayo added 10.

Another extra 4 minutes proved to be beneficial for Rogers, which won its second overtime decision in less than a week.

Alonzo Porchia hit a 3-pointer from in front of the Mounties' bench with 2.4 seconds left to tie the game at 47 and force overtime, then Rex Krout scored 5 of the Mounties' 8 overtime points, including a three-point play that gave the Mounties (2-0) the lead for good at the 2:50 mark.

Porchia, who finished with 18 points, hit three free throws in overtime, but his miss with 9.1 seconds left gave Russellville a chance. The Cyclones, however, couldn't get a shot to fall from close range.

Krout added 17 points for Rogers, which will play Harrison in today's late game. Caleb Carter led Russellville (4-2) with 22 points, but his miss on the front end of a 1-and-1 in regulation set up Porchia's game-tying shot.

Conway outscored Harrison 32-10 over the last 9 1/2 minutes and pulled away from the Goblins to take the first game Thursday.

Blake Shrum had 14 points and Cole Cecil 10 for Harrison. Colen Thompson scored 14 of his 19 points in the second half to lead Conway, while Kanard Turner added 12.