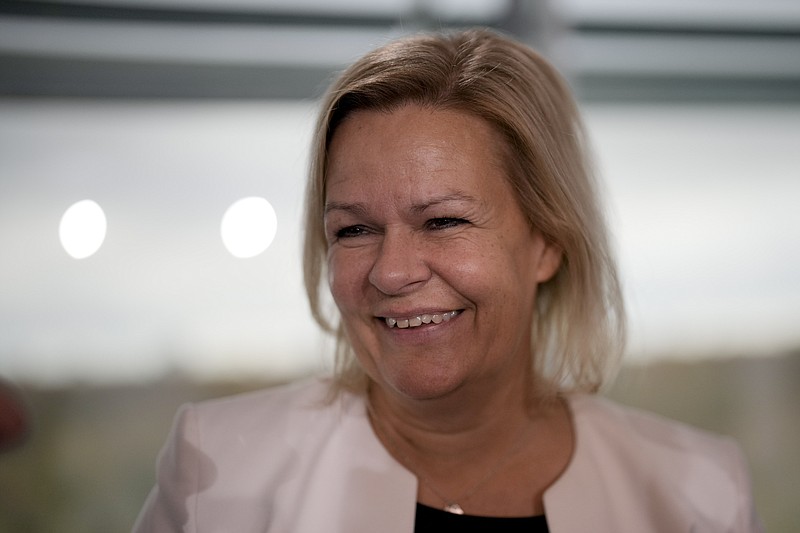 German Interior Minister Nancy Faeser attends the weekly cabinet meeting of the German government at the chancellery in Berlin, Germany, Wednesday, Dec. 7, 2022. Officials say thousands of police have carried out a series of raids across much of Germany against suspected far-right extremists who allegedly sought to overthrow the state in an armed coup. Federal prosecutors said some 3,000 officers conducted searches at 130 sites in 11 of Germany's 16 states. (AP Photo/Markus Schreiber)

BERLIN -- An alleged plot to topple the German government, led by a self-styled prince, a retired paratrooper and a Berlin judge, had its roots in a murky mixture of post-war grudges, antisemitic conspiracy theories and anger over recent pandemic restrictions, experts say.

While the name might suggest a link to the Nazi era, it actually refers to the first modern pan-German nation formed when Prussia's King Wilhelm I and his chancellor, Otto von Bismarck, united numerous smaller states into a single empire, or Reich, in 1871.

Reich Citizens consider the partition of Germany by Allied powers after World War II and the subsequent democratic states that followed to have been illegal, arguing instead that the original Reich still exists.

"To some extent they distance themselves from the Third Reich," said Johannes Kiess of the Else-Frenkel-Brunswik Institute for Democracy Studies in Leipzig, referring to the German dictatorship under Adolf Hitler from 1933 to 1945. "But [they] have very little problems working together with any outright neo-Nazi groups."

Kiess said Thursday that the rise of the Reich Citizens movement reflects the shifts that have taken place on the far-right end of the political spectrum in recent years. Whereas outright opposition to the existing order was once a fringe position, anger at the restrictions imposed during the coronavirus pandemic has proved fertile ground for anti-government sentiment, he said.

"We now really have the middle classes being open to all sorts of conspiracy theories," Kiess said.

He likened the development in Germany to that in the United States, where white supremacist movements joined with those who believe a "deep state" is controlling government in opposing the peaceful transition of power following the last presidential election.

Martina Renner, a member of the opposition Left party in Germany, concurred.

"What we saw with the storming of the Capitol in the United States is like a blueprint for what's happening here," she said. "It's being strongly taken up here and there are attempts to repeat it."

Federal prosecutors said some of those arrested had concrete plans to enter the German parliament with weapons. Such an attack would have been made easier by the fact that one of the alleged plotters, Birgit Malsack-Winkemann, was a former lawmaker for the Alternative for Germany party with intimate knowledge of the Bundestag building.

Prosecutors said the group had intended to make Malsack-Winkemann justice minister after their coup, while the new government would be headed by Heinrich XIII Prince Reuss. The 71-year-old member of the House of Reuss, who continues to use the title of "prince" despite Germany abolishing any formal role for royalty more than a century ago, was identified as one of the ringleaders of the plot, officials said.

Some in Germany have questioned whether the suspected extremists would actually have been able to pull off any serious attack.

But the country's top security official, Interior Minister Nancy Faeser, said it would be wrong to underestimate such groups, especially if their members include people trained to use firearms, such as soldiers or police officers, as was allegedly the case.

Olaf Sundermeyer, an investigative journalist with German public broadcaster RBB who specializes in political extremism, said authorities had long played down the threat posed by Reich Citizens until one shot and killed a police officer six years ago.

In addition to having a "history of radicalization," many Reich Citizens share an affinity for Russia and are open to disinformation spread by Russian news outlets, said Sundermeyer -- whose view was echoed by Renner, the German lawmaker.

But he questioned those who claim there is outright collusion with Moscow to topple the government.

"I don't see any evidence of structural, systematic cooperation between these groups and Russian authorities," said Sundermeyer, who had tracked the movement for many years.

Still, federal prosecutors said Prince Reuss reached out to Russian officials to discuss his plans, and the only non-German detained Wednesday was identified as Vitalia B., a Russian citizen.

Georg Meier, the top security official in Thuringia state, told public broadcaster Deutschlandfunk on Thursday that he expects a second wave of people to be detained as authorities review evidence seized.