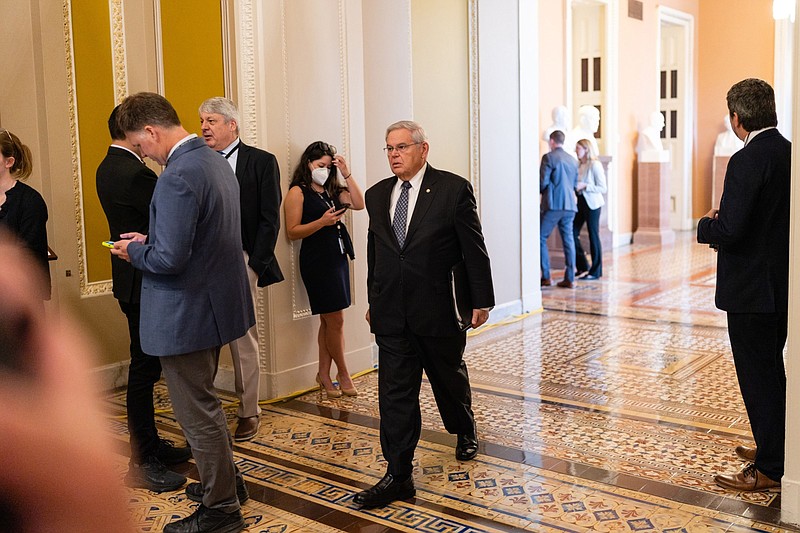 Similar legislation has been advanced since at least 2010, with limited success. But Democrats believe public opinion is shifting against the oil industry after this summer's record nationwide gasoline spike to $5 a gallon and a string of record profit announcements, largely via oil and gas price gyrations in the aftermath of Russia's February invasion of Ukraine.

President Joe Biden has frequently attacked oil executives for not investing enough in new production and for enjoying a "windfall from war" in Ukraine.

Exxon Mobil and Chevron announced capital spending plans for 2023 that exceed 2022 spending but have not altered their medium-term ranges as the companies focus on financial returns. Exxon Mobil also increased its share buyback program for the second time this year and now plans to repurchase $50 billion through 2024.

Separately, Menendez is reviving a legislative effort, alongside Sen. Jack Reed, D-R.I., to spur companies to more quickly develop oil and gas holdings by slapping a $10-per-acre annual fee on nonproducing federal leases. The bill -- the Use It or Lose It Act of 2022 -- dovetails with proposed leasing changes outlined by the Interior Department and measures advanced on Capitol Hill since at least 2008.

The bills signal that some Democrats, perhaps emboldened by party success at the midterm elections, are unlikely to ease their attacks on oil producers just because elections are over.

"The American people shouldn't have to subsidize Big Oil CEOs and shareholders while families are hit with high prices at the pump," Menendez said. The tax bill puts "American taxpayers ahead of the corporate oil industry who for far too long have been enjoying economic windfalls on the backs of hardworking Americans."

The timing of the bills is notable given the few weeks left in the current Congress. Republicans have been broadly opposed to such legislation, and some GOP support will be needed for the bills to pass the Senate. The legislation is expected to stall in the House, where Republicans will have a majority next year.

Exxon Mobil and Chevron, along with many domestic peers, posted record earnings in the second and third quarters of this year when oil prices averaged more than $100 a barrel. Prices have since declined amid demand concerns in China and economic slowdowns elsewhere, but the relationship between the Biden administration and the oil industry remains tense.

Chevron CEO Mike Wirth spoke out against a prior threat from Biden for a windfall-profits tax. Such measures go against the administration's stated goal of more, not less, oil production, Wirth said at the Economic Club of New York earlier this month.

"Most things you want more of, you don't add taxes to," he noted. Earlier this year, Wirth said "mixed signals" coming out of the Biden administration, especially regarding climate change, were in part to blame for companies being conservative with their future investment plans.

Industry executives partly point to Biden's anti-oil rhetoric for the slow rebound. But the administration frequently cites the thousands of unused leases oil companies are sitting on as evidence the industry favors pocketing proceeds from high prices over reinvesting in new production.

Menendez's Use It or Lose It Act proposes to tackle this problem. The bill "is intended to disincentivize oil companies from holding onto non-producing leases in order to inflate the reserves that they boast to shareholders, while limiting supply and gouging consumers at the pump," the statement from the senator's office said.

"The oil industry is utilizing less than half of the federal land that they already have, all while declining to increase production and raking in record profits," the statement said.

After months in which gasoline prices in the U.S. have been one of the most visible symbols of inflation, they have a new distinction: Prices at the pump are now lower than they were a year ago.

The reversal of the price escalation that accompanied Russia's invasion of Ukraine is expected to ease pressure on U.S. consumers dealing with the high cost of other essentials.

The drop in gasoline prices was led by a decline in worldwide energy demand, which drove oil prices lower. The national average price for regular gasoline stood at $3.33 a gallon Thursday, according to AAA. A year ago, the average price at the pump was $3.34. In Arkansas, motorists were paying Thursday an average $2.87 per gallon, down from $2.97 a year ago, according to AAA.

At their peak, gasoline prices were just over $5 a gallon in mid-June. The price of West Texas Intermediate crude oil, the U.S. benchmark that serves as the main driver of gas prices, on Thursday fell to its lowest level of the year, closing below $72 per barrel, after trading above $120 in March and June.

AAA expects gasoline prices to continue to decline through the end of the month, partly because winter-blend gasoline has fewer environmental restrictions, thereby making it cheaper to produce.

But U.S. gasoline prices frequently decline in December before rising in January. And factors beyond the U.S. -- including the Ukraine war, Chinese demand and the decelerating world economy -- make the outlook for the new year uncertain.

The price drop is a political boon for the Biden administration, which has been drawing down the nation's Strategic Petroleum Reserve since the spring in an effort to keep prices contained.

Although gasoline prices have fallen from recent peaks, they remain higher than they were throughout the past several years. Along with elevated oil and natural gas prices, this has powered the series of record-breaking quarterly profits at energy companies such as Exxon Mobil and Chevron.

The net income of global oil and gas producers is set to double this year, to an "unprecedented" $4 trillion, the International Energy Agency said in a recent report.

Information for this report was contributed by Kevin Crowley of Bloomberg News (WPNS) and Isabella Simonetti of The New York Times.