Down to a dozen: Brazile’s loss leaves open playing time for Razorbacks 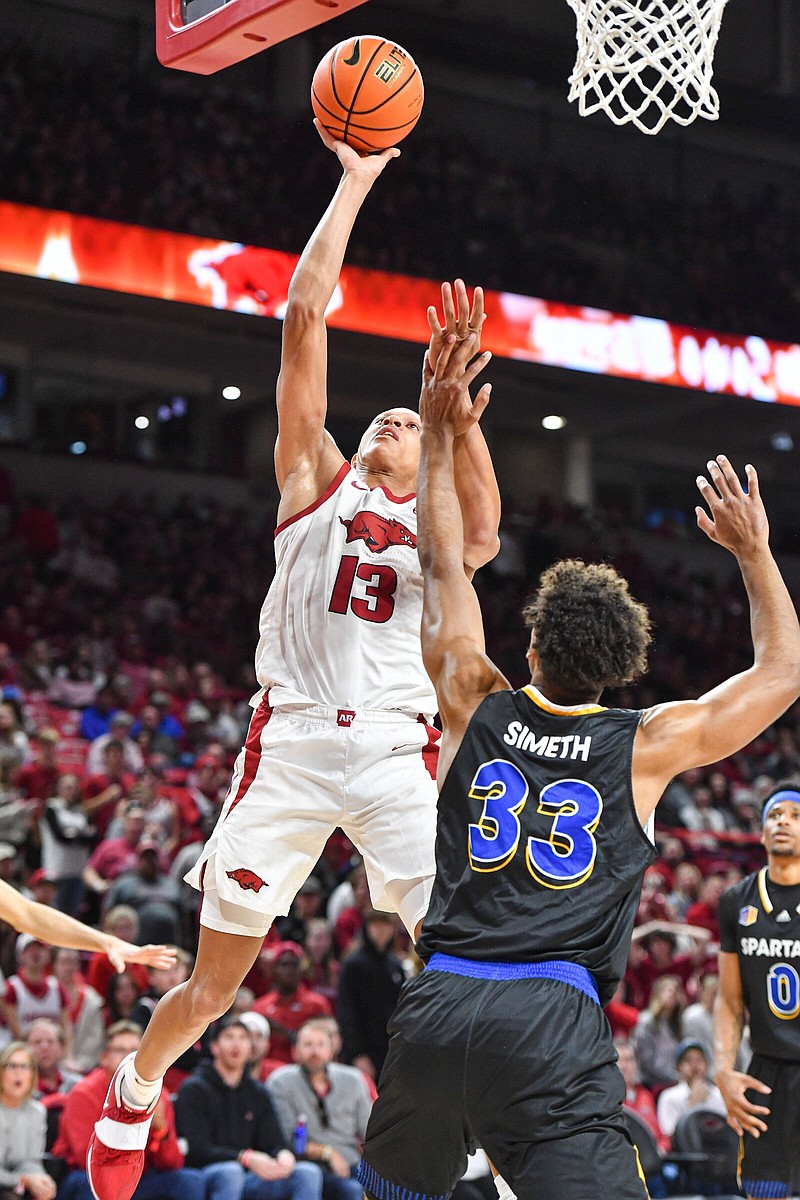 Arkansas 6-7 freshman forward Jordan Walsh (13) is one of several Razorbacks who could see their playing time increase with the loss of Trevon Brazile, who suffered a season-ending knee injury Tuesday night. (NWA Democrat-Gazette/Hank Layton)

FAYETTEVILLE -- University of Arkansas Coach Eric Musselman didn't get to have his full roster of 13 scholarship players available for long.

"It's a shame this ballclub will really have only one game together that it was fully healthy," Musselman said. "That's not going to change. That's just going to be a fact for the entire year."

It's not going to change because sophomore forward Trevon Brazile tore the anterior cruciate ligament in his right knee in a 65-58 victory over North Carolina-Greensboro on Tuesday and will miss the rest of the season.

Freshman guard Nick Smith missed the first six games recovering from a right knee injury and returned against Troy when the Razorbacks won 74-61, but junior guard Davonte "Devo" Davis was out for personal reasons.

Davis returned for a 99-58 victory over San Jose State for what turned out to be the only game where all the scholarship players were healthy and available.

Brazile was injured with 7:30 left in the first half against UNCG. The extent of his injury, which will require surgery, was announced Wednesday.

"It's life," freshman point guard Anthony Black said when asked about having just one game with a full roster. "Stuff doesn't always go your way.

"We've just been figuring out ways to adjust to it. Although not having Nick sucked and then Devo, we understood what he had to do.

"And now losing T.B., it's tough, but stuff happens, and good teams just figure out ways to keep going and keep getting better regardless of the scenario."

The No. 9 Razorbacks (8-1) will play their first game since Brazile's injury against Oklahoma (7-2) at noon Saturday at the BOK Center in Tulsa.

"I feel horrible for the young man," Sooners Coach Porter Moser said when asked about the impact of Brazile's absence on Arkansas. "I know him a little bit from the recruiting process. I got to meet him one time.

"A really nice kid, really was playing well. So you feel for him.

"That said, where do they go from here, they still have four more guys on the NBA Draft board. There's a lot to still focus in on. Nick Smith, Anthony Black, Ricky Council, Jordan Walsh. All of them. You can go down the list.

"I just think they're a very deep team, very athletic, so there's a lot of pieces there. But any time a young man goes out for the year, truly it's bigger than one game. My thoughts and prayers go out to him."

Musselman said that when the Arkansas coaching staff put together a roster with 11 newcomers, the versatility of Brazile -- a transfer from Missouri -- was a key factor.

Brazile played off the bench in every game this season, but he averaged 11.8 points and a team-high 6.0 rebounds in 27.0 minutes, shared the team lead with 11 blocked shots and hit 11 of 29 three-pointers.

"It definitely changes our team, there's no doubt about that," Musselman said of losing Brazile. "In my opinion, he's one of the top five players in the league, so it's going to hurt us because of his talent level and his size.

"But these things happen in athletics. We've got to figure out how we move forward. I mean, it is what it is. As my wife [Danyelle] said, 'Get to work, and have a good attitude, and get your team ready to play.' "

Musselman was Nevada's coach during the 2017-18 season when the No. 24 Wolf Pack lost junior starting point guard Lindsey Drew in February to a ruptured Achilles tendon in his right foot.

"Lindsey Drew was the first player I recruited, and he and I couldn't have been on more of the same wavelength as a point guard and a head coach," Musselman said. "He tore his Achilles, and we moved our power forward, Cody Martin, to the point guard spot. Which was unheard of at that particular time, to move Cody from where we did to the point.

"We ended up being 10, 15 seconds away from getting one more stop and going to an Elite Eight."

With Martin -- who now plays for the NBA's Charlotte Hornets -- at the point, Nevada advanced to the NCAA Tournament Sweet 16 before losing 69-68 to Loyola-Chicago, which was coached by Moser.

Nevada was 22-5 when it lost Drew for the rest of the season. The Wolf Pack finished 29-8.

"When Lindsey got hurt, quite frankly, I didn't know if we were going to be able to win a game because we relied on Lindsey so much," Musselman said. "So I just used that as an example with [the Razorbacks].

"Roles, positions, they're going to change. Somebody's going to get a new opportunity, or a couple guys are, and then we just have to hope that guys play well."

After Brazile went down against UNCG, the 6-4 Davis played 29 minutes off the bench and was at power forward much of the time, and 6-9 senior center Makhi Mitchell played a season-high 32 minutes.

Walsh, a 6-7 freshman forward who has been starting and is averaging 22.0 minutes, could see his playing time increase.

"We have some talented bigs and now they know it's time to step up," Black said. "We just lost a really key player.

"I feel like everybody can help us in a different way. So we're going to need everybody to step up from here on out."

No. 9 Arkansas men vs. Oklahoma

WHEN Noon Central on Saturday 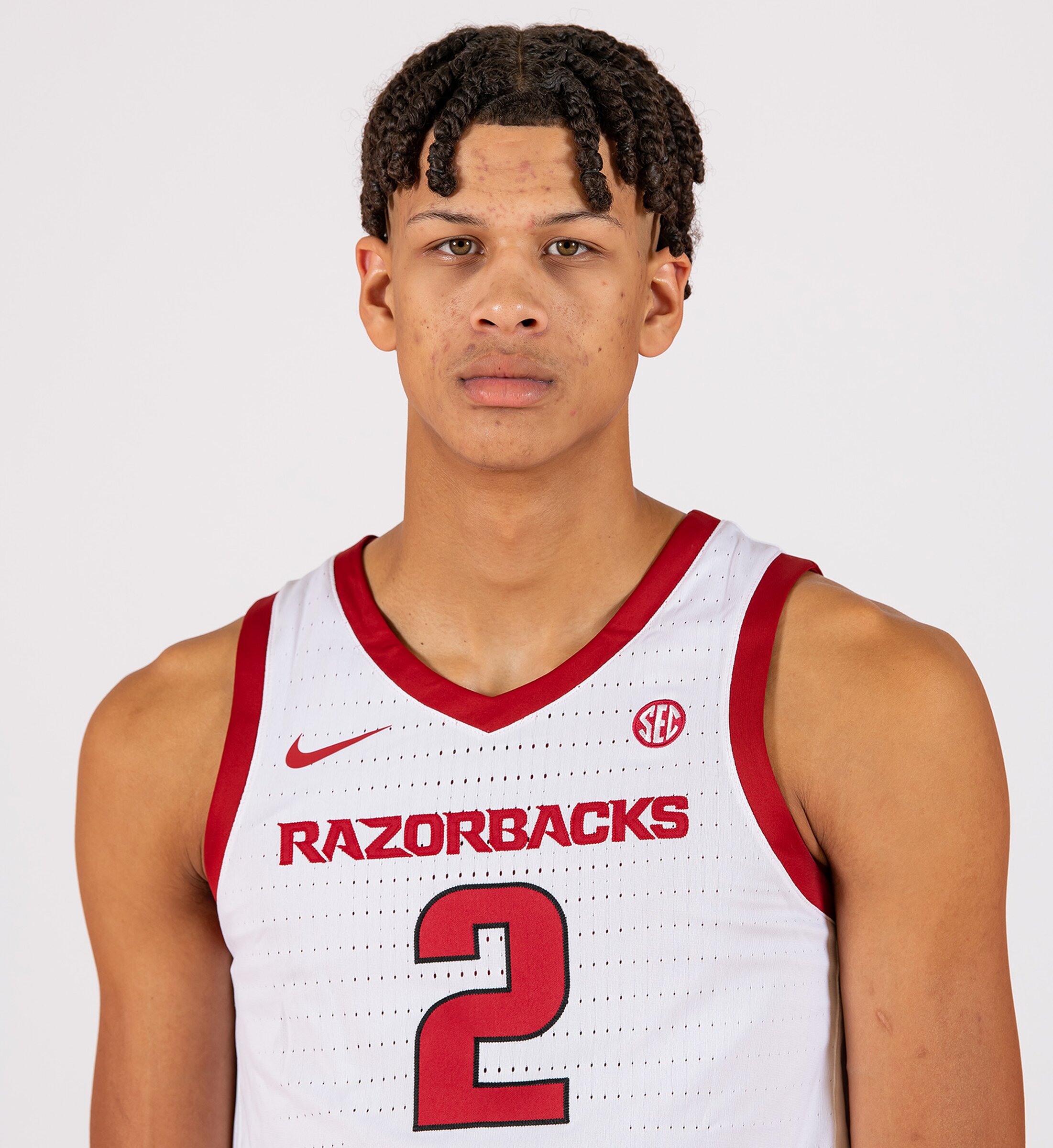 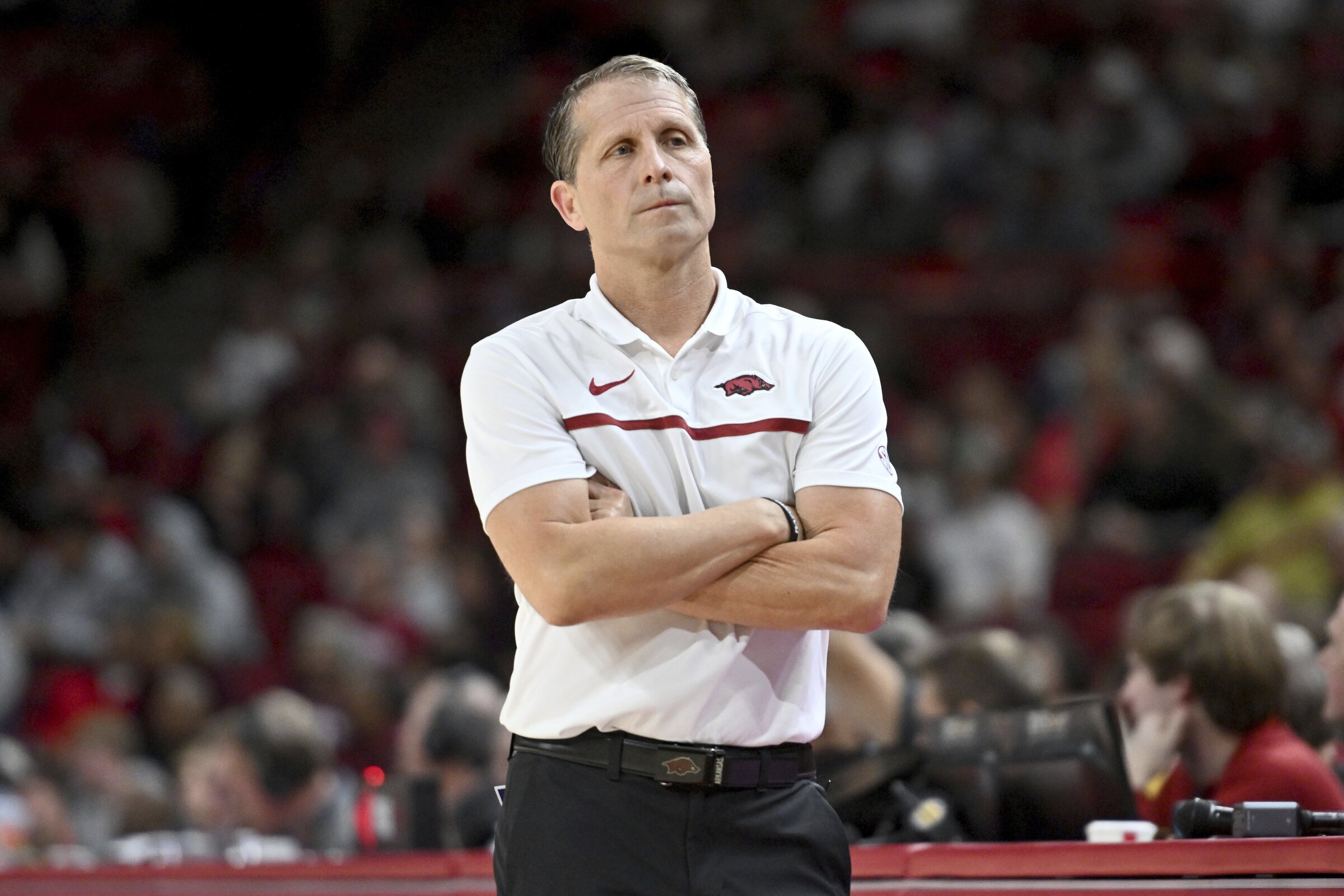 Arkansas coach Eric Musselman on the sidelines against Troy during the second half of an NCAA college basketball game Monday, Nov. 28, 2022, in Fayetteville, Ark. (AP Photo/Michael Woods)

Print Headline: Down to a dozen