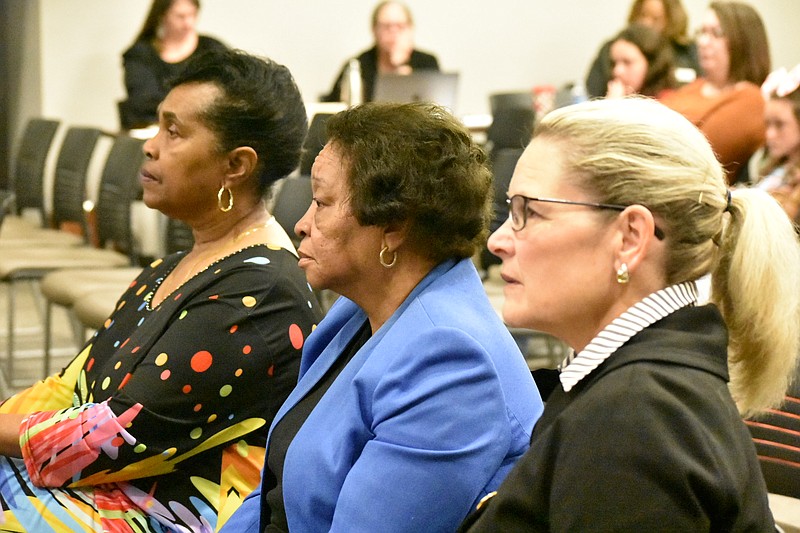 From left, former Pine Bluff School District educators Mattie Collins and Earlene Collins, and Pine Bluff lawyer Rosalind Mouser listen to a vote by the Arkansas Board of Education on installing a limited-authority board for the district during Thursday's regular meeting in Little Rock. (Pine Bluff Commercial/I.C. Murrell)

LITTLE ROCK – The seven people who will serve on a limited-authority board for the Pine Bluff School District have been selected.

The Arkansas Board of Education on Thursday voted unanimously to allow the state-operated district to be represented by the appointed community leaders who will refer all decision-making matters to Education Secretary Johnny Key for final determination. A date for the initial meeting of the PBSD board has not been set as each appointee must go through training. State education leaders, however, have set a goal of restoring a limited-authority board to the district by January.

In the first of three related motions, the state board accepted Key's recommendation to appoint to the PBSD board:

• Charles Colen, professor and chair of the UAPB Department of Industrial Technology Management and Applied; Engineering, in Zone 5;

• Lori Walker Guelache, assistant director of economic development with the city of Pine Bluff, in Zone 7.

"The appointment of a limited-authority board marks the next stage of progress for the Pine Bluff School District," Key said. "The new board members are very impressive and bring a wealth of knowledge and experience to their new role. I am encouraged that the students of the Pine Bluff School District will benefit greatly from their leadership, and I look forward to continuing our work with the new board and Superintendent [Barbara] Warren."

A five-member selection committee appointed the seven from a pool of 30 candidates recruited by interested district stakeholders who stressed the importance of the entire board representing zones that cover the Dollarway and Pine Bluff school districts before their July 2021 annexation. The Dollarway district included locations in the Altheimer Unified School District, which merged with Dollarway in 2006.

Earlene Collins, a former Pine Bluff High School building principal, chaired the limited-authority board committee of the Unified Stakeholders of the PBSD and led efforts to recruit interested board members.

"We started with phone calls," Earlene Collins said. "Three or four people gave me names, and then when the group was formed, I told the persons over that group I would chair the subcommittee for the limited board because I talked with Secretary Key in May, and I asked if we would have any input. He said we would."

Earlene Collins added her committee wanted to identify leaders with a genuine interest to "do the work" on a school board.

Rosalind Mouser, a Pine Bluff attorney who chaired the Unified Stakeholders state board committee, called Earlene Collins "the real star" behind the recruitment.

"The economic welfare of Pine Bluff, and therefore Jefferson County, is dependent on the strongest public school system we can have," Mouser said. "We need to have a renewed effort by as many citizens as possible to support not only the Pine Bluff School District but the White Hall School District and the Watson Chapel School District. All school districts can thrive, and if they thrive, our economy in our county ought to thrive."

State board members approved a second motion, which stated once all members of the PBSD board have completed initial training organized by the Office of Coordinated Support and Service, the local board shall consider all matters that otherwise would be fielded by an elected body and make recommendations to Key. As stated in the final motion, the OCSS will continue to report quarterly to the state board concerning district operations, and Key will make recommendations to the state board concerning transitions of authority to the local board "as appropriate."

Thursday's motions by the state board marked an important step toward a return to full local control for a recently annexed district that has been operated by the Arkansas Department of Education since September 2018, when the nine-member state body took over the PBSD citing "fiscal distress." Under state law, the Arkansas Department of Education has five years from takeover to restore a district to full local control, annex it with another, consolidate it with another or reconstitute it. By statute, the PBSD has until June 30, 2024 – the end of the fifth school year following its takeover – to be removed from fiscal distress.

"I'm excited because I love the kids, and it's all for the kids," Mattie Collins said. "Everything we do is to make sure our kids are successful. I'm really focusing in on academic excellence."

CORRECTION: Mouser chaired the state board committee of the Unified Stakeholders. A previous version of this story inaccurately stated her position.