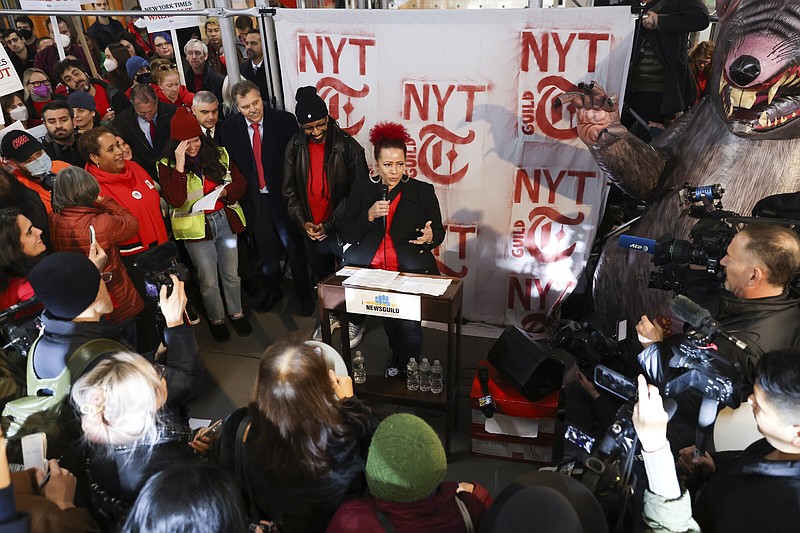 NEW YORK -- More than 1,000 New York Times journalists and other staff walked off the job Thursday for 24 hours, frustrated by contract negotiations that have dragged on for months in the newspaper's biggest labor dispute in more than 40 years.

Hundreds of reporters, editors, photographers and other employees picketed outside the newspaper's offices near Manhattan's Times Square. With a hollowed out newsroom, the Times was relying on international and nonunion staffers to deliver content to its more than 9 million worldwide subscribers until the strike's planned end at 12:01 a.m. today.

The NewsGuild of New York went through with its pledge to strike after the two sides failed to reach a deal in marathon negotiations that broke off Wednesday evening. The sides remain far apart on issues including wages, remote work policies and a performance review system, which the union says is racially biased. The current contract expired in March 2021, and the union has accused the company of dragging out negotiations.

"I'm not angry. I'm just deeply disappointed in our company," said Nikole Hannah Jones, a Pulitzer Prize-winning investigative journalist who spoke at the rally. "You shouldn't have to struggle financially to work at a place like the Times, no matter what your position is."

In an email to the newsroom, Executive Editor Joe Kahn said he was disappointed in the decision to strike when negotiations are not at an impasse, the Times reported in its own story on the walkout. Kahn said Thursday's report would be "robust" but that producing it "will be harder than usual."

Stacy Cowley, a financial reporter and chief union negotiator, said the strike nearly depleted many newsrooms teams, included her own. Those who participated included members of the fast-paced live news desk, which covers breaking news for the digital publication. The live desk was still operating Thursday, focusing on the U.S. basketball star Brittney Griner's release from Russian prison as part of a prisoner exchange.

The NewsGuild has argued that employees deserve better compensation for their roles in helping the Times become a success story in the long-beleaguered news industry.

The Times, which has grown its subscriber base in recent years, projected an adjusted 2022 operating profit of between $320 million and $330 million, according to its most recent earnings report. However, Times Chief Executive Meredith Kopit Levien said in a companywide email that profits are still not what they were a decade ago, the Times reported.

The strike comes as other U.S. media companies including Gannett, CNN and the digital media outlet BuzzFeed have cut staff, citing difficult economic conditions and a pullback in advertising.

In a note sent to guild-represented staff Tuesday night, Deputy Managing Editor Cliff Levy called the planned strike "puzzling" and an "unsettling moment in negotiations over a new contract." He said it would be the first strike by the bargaining unit since 1981.

The Times has seen shorter walkouts in recent years, including a half-day protest in August by a new union representing technology workers who claimed unfair labor practices. The last strike that stopped the newspaper's publication was in 1978 and lasted 88 days.

In one breakthrough that both sides called significant, the company backed off its proposal to replace the existing adjustable pension plan with an enhanced 401(k) retirement plan. The Times offered instead to let the union choose between the two. The company also agreed to expand fertility treatment benefits.

At the rally, Cowley said there was momentum during negotiations this week and hoped for a breakthrough to avert more work stoppages. "But if talks stall again we will be asking you for your trust and support for further actions," Cowley told the crowd, which shouted back, "Whatever it takes!"

The NewsGuild said via Twitter that "management walked away from the table with five hours to go" before the planned strike. Times spokesperson Danielle Rhoades Ha said in a statement that the sides remained in negotiations when the company was told that the strike was happening.

Cowley told The Associated Press the union representatives had been prepared to continue talks, but when several reporters informed editors they would join the strike, management ended bargaining for the night. She said the next scheduled negotiation session is Tuesday.

Journalists with the Fort Worth Star-Telegram, meanwhile, are in their second week of a strike over contract negotiations about pay and other policies. Of the 32 staff members at the paper, 21 are on strike, according to the Fort Worth NewsGuild. The paper was one of several in Texas that saw its staff unionize amid a recent rise in labor organization.

The Fort Worth NewsGuild says the paper's parent company, McClatchy, refused to bargain in good faith. Steve Coffman, executive editor of the Star-Telegram, denied that and said the company looks forward to reaching an agreement.

Newsroom workers have been staging a similar strike at the Pittsburgh Post-Gazette since October.

Information for this report was contributed by Jake Bleiberg and Deepti Hajela of The Associated Press.