Omicron shot OK’d for kids under 5

Pregnant urged to get vaccinated by Compiled by Democrat-Gazette staff from wire reports | December 9, 2022 at 4:49 a.m. 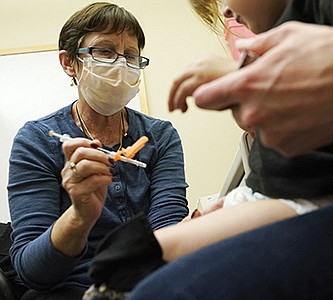 U.S. regulators on Thursday cleared doses of the updated covid-19 vaccines for children younger than 5. Also, medical experts are renewing their plea to another vulnerable population -- pregnant women.

The Food and Drug Administration's decision aims to better protect the littlest children amid an uptick in covid-19 cases around the country -- at a time when children's hospitals already are packed with tots suffering from other respiratory illnesses including the flu.

"Vaccination is the best way we know to help prevent the serious outcomes of covid-19, such as hospitalization and death," Dr. Peter Marks, FDA's vaccine chief, told The Associated Press.

Omicron-targeted booster shots made by Moderna and rival Pfizer already were open to everyone 5 and older.

The FDA now has authorized use of the tweaked shots starting at age 6 months -- but just who is eligible depends on how many vaccinations they've already had, and which kind. Only about 5% of youngsters under age 5 have gotten the full primary series since vaccinations for the littlest children began in June.

The Centers for Disease Control and Prevention is expected to sign off soon, the final step for shots to begin.

Marks said the bivalent vaccine is safe for tots and will help parents "keep the protection for those children as up to date as possible."

But children under 5 who already got all three Pfizer doses aren't yet eligible for an updated booster.

For now, "the good news is they are probably reasonably well-protected," Marks said.

The FDA expects data from Pfizer and its partner BioNTech sometime next month to determine whether those tots will need an omicron-targeted booster "and we will act on that as soon as we can," he said.

For parents who haven't yet gotten their children vaccinated, it's not too late -- especially as "we are entering a phase when covid-19 cases are increasing," Marks said.

The updated vaccines from Moderna and Pfizer are combination shots, containing half the original vaccine and half tweaked to match the BA.4 and BA.5 omicron strains that until recently were dominant. Now BA.5 descendants are responsible for most covid-19 cases.

The CDC last month released the first real-world data showing that an updated booster, using either company's version, does offer added protection to adults. The analysis found the greatest benefit was in people who'd never had a prior booster, just two doses of the original covid-19 vaccine -- but that even those who'd had a summertime dose were more protected than if they'd skipped the newest shot.

The new action by the FDA further expands access to the so-called bivalent shots, although there is unlikely to be strong demand for them among parents. Only a small fraction of the country's youngest children have been immunized since the original vaccines were authorized for that age group nearly six months ago.

Of all the groups still threatened by covid-19 -- including the elderly and the immunocompromised -- it is pregnant women who seem the most unaware of the risks.

Covid can kill pregnant women and can result in miscarriage, preterm births and stillbirths even when the women have asymptomatic or mild illness. The infection may also affect the baby's brain development.

Dozens of studies have shown that the covid vaccine is safe for pregnant women. Immunization of the mother also passes along protective antibodies to her fetus.

Yet only 70% of women have completed the primary vaccination series for covid before or during pregnancy, meaning that roughly 30% of pregnant women have not had this basic protection. Since early September, only 15% have opted for a booster shot.

Even the flu vaccine has not proved popular with pregnant women this year: Just 37% of pregnant women had been vaccinated for the flu as of the end of October, compared with nearly 60% at the end of September 2020.

The United States is now struggling with a mix of respiratory syncytial virus, the flu and the coronavirus, all of which can cause serious illness in pregnant women. The winter is looking grim.

"I'm concerned about it, especially given low vaccination rates," said Dr. Denise Jamieson, an obstetrician at Emory University in Atlanta and a member of the covid expert group of the American College of Obstetrics and Gynecologists.

Even early in the pandemic, it was obvious that covid was dangerous in pregnancy. Data from a study in June 2020 showed that among pregnant women infected with covid, about 1 in 3 ended up in the hospital, compared with about 6% of women who were not pregnant.

"It's very clear now that if you're pregnant, planning to get pregnant or breastfeeding, for you and for your baby, it's very important to get vaccinated," said Dr. Neel Shah, an assistant professor at Harvard and chief medical officer of Maven Clinic, a digital health care provider for women and families.

Pregnant women, their families and even their doctors may not realize the importance of immunization because of "sluggish and muddled" communication from public health agencies, Shah said.

The Centers for Disease Control and Prevention did not wholeheartedly endorse vaccination for pregnant women until September 2021, about three months before the omicron variant swept the nation and months after the American College of Obstetricians and Gynecologists Society for Maternal-Fetal Medicine strongly recommended the shots for pregnant women.

By then, mistrust and misinformation had already been sown, and only about one-third of pregnant women were vaccinated. "That was a big part of the failure, honestly," Shah said.

Scientists used to believe that pregnant women were, in essence, immunocompromised -- that the body tolerates a fetus by responding to it as it would a foreign invader and suppressing its own immune responses. "We now know that that's not true; that's an oversimplification," Jamieson said.

Pregnancy is accompanied by some immune changes, she said, but they don't compromise the ability to fend off infections as an organ transplant or certain medical conditions might.

Still, pregnant women are vulnerable for other reasons. The growing uterus compresses the lungs, hindering the ability to take in air, for example. Pregnancy can also cause conditions such as diabetes and high blood pressure, which put a person at risk for severe covid.

Studies have shown that the placenta of pregnant women who are infected with the coronavirus resembles that of women with preeclampsia, a form of dangerously high blood pressure in pregnancy.

The placenta is a sponge of blood vessels that enables the exchange of oxygen and nutrients between the mother and fetus. It takes on the role of lungs, liver and kidneys for the fetus, but covid can ravage it, said Dr. Anne V. Herdman Royal, a pathologist at Tulsa Medical Laboratory who studies placental tissue.

"The placenta is essentially the lungs for the fetus, and it's damaged in the same way that lungs are by covid," she said. Most babies turn out to be fine, as long as they have completed at least 30 weeks of gestation, she added.

So why have so many pregnant women avoided vaccination? Many have focused on claims of risk for which there is little to no evidence while ignoring the very real dangers of covid, Royal said.

That's true not just of pregnant women butao of friends, family and even their health care providers.

In October 2021, Maven Clinic surveyed 500 women in the United States. Nearly 70% said at least one person had suggested they avoid the vaccine while pregnant. In about one-third of these cases, the source was a health care provider.

Many women willingly have the DTaP vaccine -- which protects against diphtheria, tetanus and pertussis -- in the third trimester because they understand that it is needed to protect the baby.

But the message has not gotten through that the flu and covid vaccines are also necessary in pregnancy, Jamieson said. In the Maven survey, for example, 1 in 3 women said they were planning to get the covid vaccine only after giving birth.

Information for this article was contributed by Lauren Neergaard of The Associated Press and by Apoorva Mandavilli and staff writers of The New York Times.